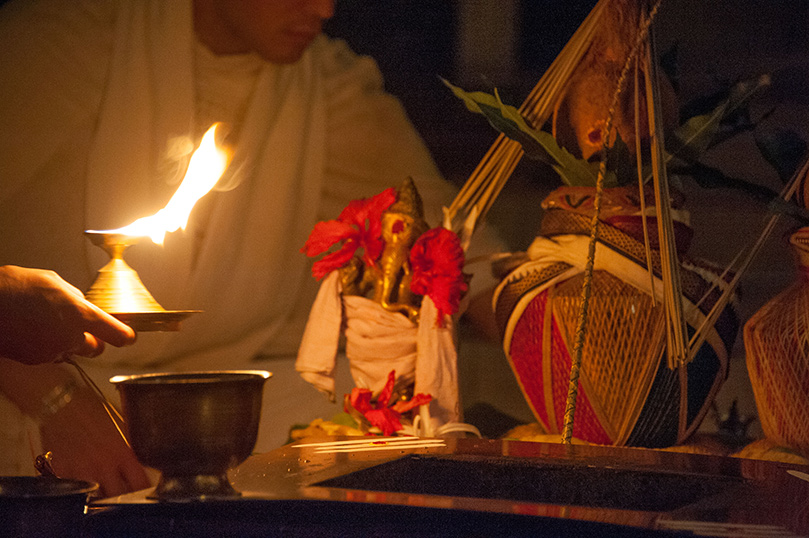 This morning the monastery enjoyed its first Homa since Satguru Bodhinatha's Return. There were many devotees in attendance including several guests who helped with the chanting of Sri Rudram, giving it extra strength. Bodhinatha burned prayers to the devas that were written by monks and devotees.

From Living with Siva about prayers to the inner worlds:

The three worlds are connected when puja is performed and worship is begun. There are certain rites that can be performed to enable individuals to communicate directly with beings in the inner worlds. Prayers are given and received in many ways. Among the most intimate, personal forms of communication is the written prayer to the devas or to God. Burned in Agni's sacred fire, it disintegrates in the physical world and quickly re-forms in the astral world. When a prayer is burned in a temple wherein this practice is consecrated, its astral image is received and read by the devas, and properly dispatched and answered, within the confines of our karmic pattern. Prayers may also be conveyed by slowly, mentally enunciating the words, visualizing them rising up the spine, through the top of the head, reaching beyond to the feet of God. The devas will not intervene unless asked. This is the inner law. The Vedas avow, "He shines forth at dawn like the sunlight, deploying the sacrifice in the manner of priests unfolding their prayerful thoughts. Agni, the God who knows well all the generations, visits the Gods as a messenger, most efficacious." Aum Namah Sivaya.

After the homa, Bodhinatha gave a perceptive talk about controlling one's thoughts. He explained the five categories of thought, and that each has a certain way in which it can be dealt with, whether through performing the vasana daha tantra, through using affirmations or by practicing breath control.

This entry was posted on Saturday, April 27, 2013 at 1:50 pm and is filed under Monastery. You can follow any responses to this entry through the RSS 2.0 feed. You can skip to the end and leave a response. Pinging is currently not allowed.

12 Responses to “A New Phase Begins”