Each year the monks take three days during the Full Moon to do nothing on our lovely little island. Over the last retreat, six of the monks headed up to the mountains for three nights at Kokee's Camp Sloggett. They hiked through the beautiful mountain forests, meditated to the silence of nature, and sat together around the camp fire to talk about deep things. The monks live busy lives of service, often filled to the brim with their seva. These few days at the rural lodge were a great chance to practice the art of being rather then doing, which Gururdeva felt was so necessary to our lives.

This entry was posted on Friday, August 23, 2013 at 8:16 pm and is filed under Kauai. You can follow any responses to this entry through the RSS 2.0 feed. You can skip to the end and leave a response. Pinging is currently not allowed. 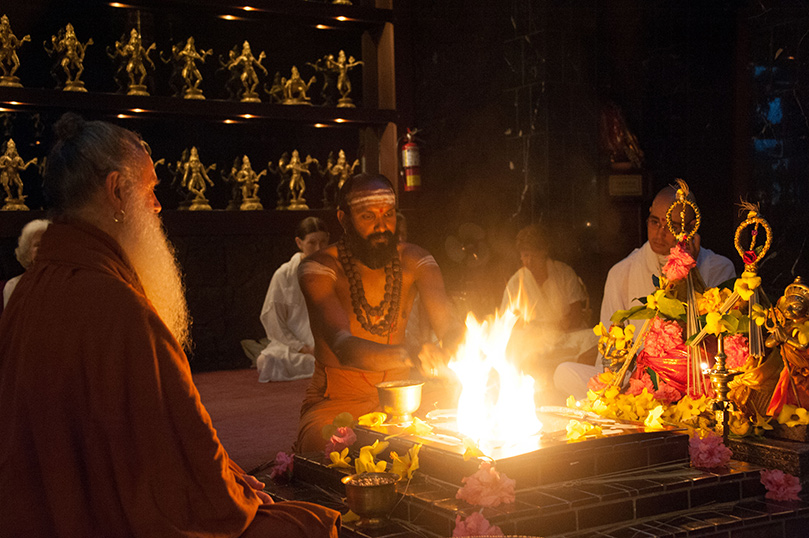 This morning a homa was held in Kaduval Temple after several weeks without one, due to the recent observance of Sadhu Paksha. Yoginathaswami performed the homa while Paramacharya Sadasivanathaswami filled in for Satguru Bodhinatha who is traveling. Paramacharya burned the prayers to the devas and gave a short talk after the homa, discussing being and non-being.

"On and on through the mind we travel daily, once awareness has become detached from the limited area of mind it has been trapped in. The journey seems endless! It is. Seek on, seek on. Look in, look in. And on that solid foundation of good character, move into that place in the mind and live there, seeing no difference between the inner and the outer states of fluctuating awareness. Be that now for which you have been striving. The search is within. Go within the mind. Go in and in and in and in and make fathomable the unfathomable depth of Being. You can do it. It has been done countless times over the past several thousand years. Give yourself the great benefit of believing in yourself and flow inward, inward—to the totality of it all." -Gurudeva

This entry was posted on Friday, August 23, 2013 at 8:04 pm and is filed under Monastery. You can follow any responses to this entry through the RSS 2.0 feed. You can skip to the end and leave a response. Pinging is currently not allowed.