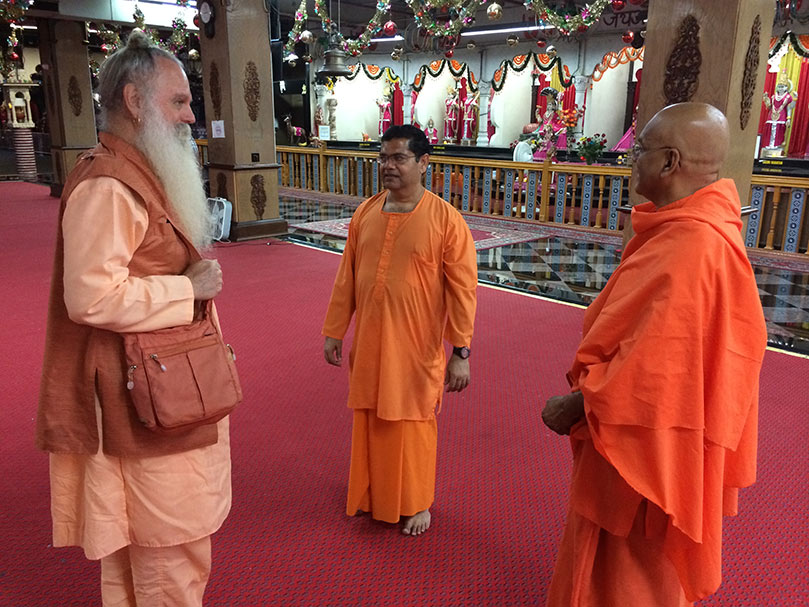 Paramacharya Sadasivanathaswami's and Sannyasin Senthilnathaswami's visit to New York included a courtesy call to our dear friend Swami Parameshananda, who participates each year at the Hindu Mandir Executives' Conference, and who participated in the Mauritius Innersearch last month.

Swamiji took us to Divya Dham Jalaram Mandir in Woodside, NY, opened in 1993 by Swami Jagdishwaranand when he brought by land and sea the flames from many of the holy centers of the North of India, combining them into a single flame that burns eternally here. After Swami passed away in 2005, the America Sevashram Sangh (branch of Bharat Sevashram Sangh) accepted his request to take over management of this large temple-museum in two conjoined warehouses in the heart of Queens.

The mandir is focused on Siva and Shakti. There is a giant black granite Sivalinga and many other Lingas, including a wall of 1,008 small Lingas--a curiously familiar concept. There is a Vaishno Devi cave, dozens upon dozens of murtis of all the popular Gods and Goddesses. Upstairs is a huge shrine to the Sakti Peeths, with 51 white marble murtis in individual shrinettes. There is also a scale model of the Himalayan range, including model trains, cars, bridges, temples, ashrams and hotels. Artifacts from across the North of India abound, and it's really quite a lot to take in.

After Divya Dham, Swami Parameshananda took us to his home, the America Sevashram Sangh Ashram in Jamaica, NY. And all along the way we saw mandir after mandir, ashram after ashram. We have known for a long time that Queens is home to many Hindu organizations, but to see them ourselves scattered here and there as we drove throughout the area was a revelation.

This entry was posted on Thursday, August 14, 2014 at 11:58 am and is filed under Travel Missions. You can follow any responses to this entry through the RSS 2.0 feed. You can skip to the end and leave a response. Pinging is currently not allowed.

One Response to “Visiting Divya Dham and BSS in Queens, NY”