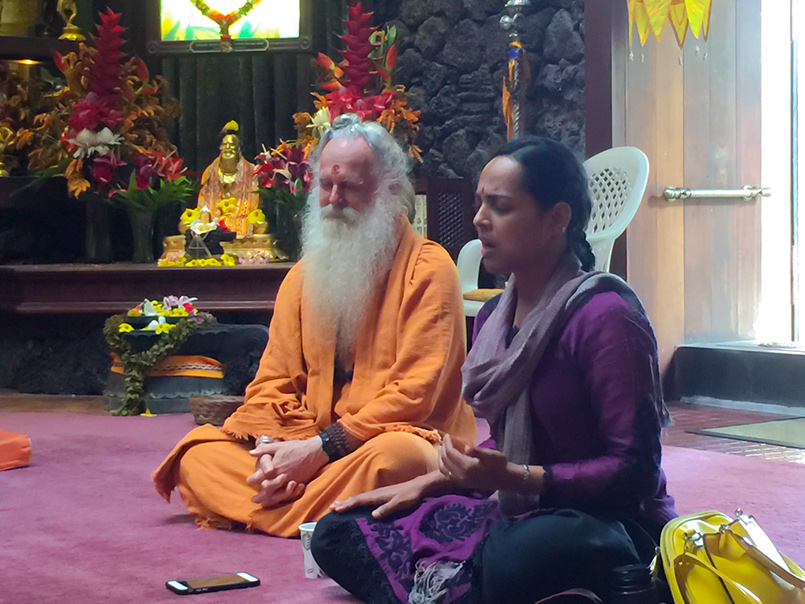 Today we were honored to have Dr. Padma Sugavanam visit the monastery. Dr. Sugavanam is a professional Carnatic vocalist from Chennai presently touring across the US. She was able to visit us since she's currently invited to present a lecture-demonstration at the University of Hawaii on O`ahu. For the last decade, Dr. Sugavanam has been lecturing at the Sri Venkateswara College of Music and Dance in Tirupati, India. Her Ph.D.'s are both in Sanskrit and musicology from the University of Madras.
Do yourself a big favor and listen to her sing "Ananda Natamaduvar Thillai" by clicking the play button on the audio file below. This Tamil piece is on Lord Siva in the form of Ananda Nataraja at Chidambaram (Thillai). It was composed by nineteenth century Carnatic composer, Neelakanta Sivan. Click here for transliterated lyrics.

This entry was posted on Thursday, June 16, 2016 at 9:29 pm and is filed under Temples. You can follow any responses to this entry through the RSS 2.0 feed. You can skip to the end and leave a response. Pinging is currently not allowed.