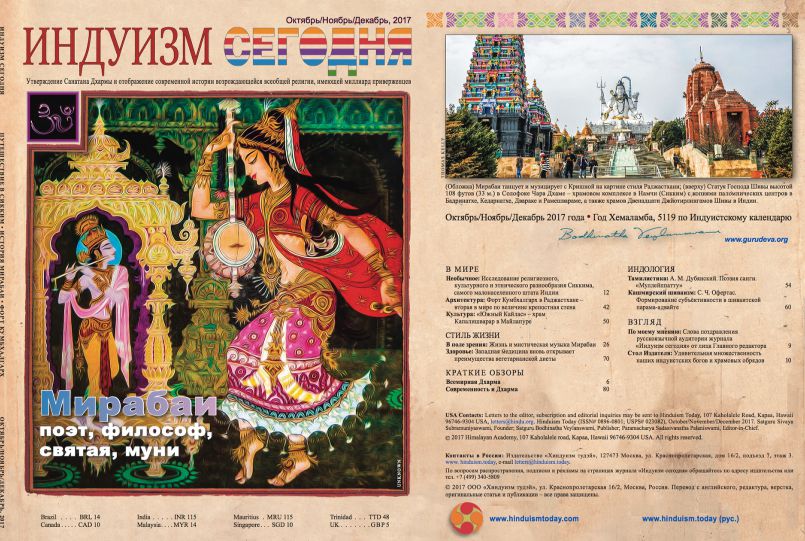 It's true, the first complete edition of our flagship magazine, Hinduism Today, has been published in the Russian language. It makes the international magazine potentially available to 166 million native speakers in that noble nation. Many do not know that a serious group of academics, and many non-scholarly citizens, regard Saivism as the original spiritual path in Russia, and they point to ancient Sivalingams and place of worship, and to philosophical footprints in history. Yesterday we received the second photo in the post from our Moscow editor Dinanatha Bodhiswami. It shows him at the famed French Institute in Pondicherry officially handing over the magazine to the experts there.

It took an immense effort and great teamwork to produce this edition, and an artistic eye to preserve the graphic sophistication and typography (nevermind making it all fit!). Congratulations to all who participated. Gurudeva would be thrilled to see this, and would offer his prayerful blessings that the magazine will continue for years to come in this newest incarnation. If you know someone who speaks the language, you can invite them to download the entire edition from this Dropbox link.

This entry was posted on Monday, January 29, 2018 at 6:45 pm and is filed under Hinduism Today Magazine. You can follow any responses to this entry through the RSS 2.0 feed. You can leave a response, or trackback from your own site.