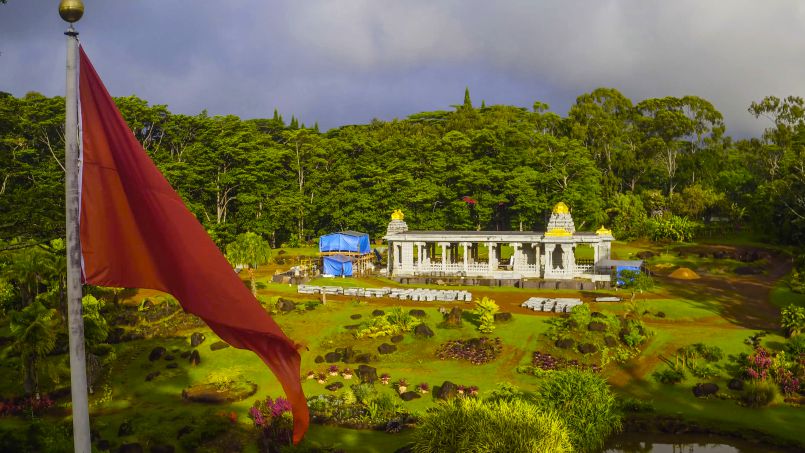 Today marks the beginning of the Jivana Ritau, the rainy season from from mid-August to mid-December. The morning began with a Siva homa in Kadavul temple, followed by a parade out to the flag pole to change the dvaja for the coming season. Afterwards, monks and devotees paraded out to Iraivan Temple for a short arati. Aum Namah Sivaya.

"The key word of this season is work. The colors are rust, copper-maroon and all shades of red rust for earthy preservation, copper-maroon for fulfillment and red for physical energy. The Aadheenams 60-foot flag pole flies the rust-colored dhvaja, symbolizing environmental care. Copper-maroon and all shades of red adorn our smaller flags. This is the season of honoring and showing appreciation for those in the vanaprastha ashrama, life's elder advisor stage.

"The focus is on preserving what has been created, manifesting goals and fulfilling plans made in the past. Inwardly the emphasis is on direct cognition and caring for the practical details of the external world. Practicality is a word much used this season. In the monasteries and the missions, there is a big push on studying the sutras of Living with Siva and the Saiva Dharma Shastras. The format of the mission satsanga changes into one that in fact helps everyone live and breathe with Lord Siva through personal adjustment to the aphorisms of Living with Siva, which define tradition, culture and protocol.

"It is a time of building and repairing and caring for what has been built, planted or created in any realm of life. It is a physical time, of exercise and exertion in the Bhuloka, a magnetic time for action and willpower, of finishing all jobs started since the first ritau. On the farm, there is harvesting of the lands fruits as we celebrate abundance."

This entry was posted on Sunday, August 19, 2018 at 9:07 pm and is filed under Sadhana. You can follow any responses to this entry through the RSS 2.0 feed. You can leave a response, or trackback from your own site.

One Response to “Ushering in the New Season”