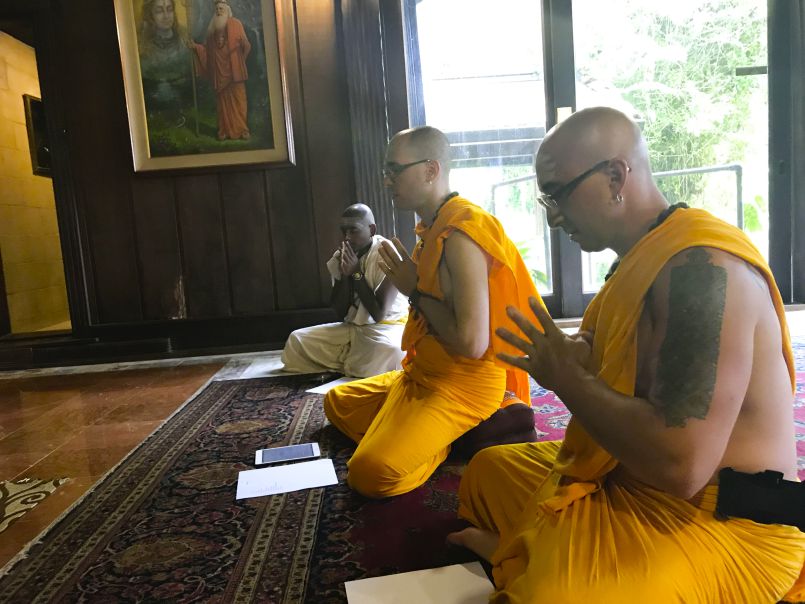 The Yogis and Natyam enjoyed several classes with their guruji these past few weeks, the subject being the Siva Sutras.

The yogis around Maharishi Nandinatha were well versed in the Siva Sutras, whose aphorisms were regarded as the voice of Siva Himself--a puzzling, mathematically sophisticated set of fourteen aphorisms that seem to be about the Sanskrit alphabet, but on deeper reflection are a key to understanding the composition of the cosmos, showing how this language creates a mystical connection to the Divine from its very roots.

The early tantric traditions, from Kashmir Saivism to Saiva Siddhanta, share a love of the Siva Sutras, those obscure, arcane, mysterious verses that yogis study even in the 21st century to delve into the mystical apprehension of the universes, gross and subtle.

These fourteen sutras--revealed to Panini, who wrote them down as a kind of yogic science notebook for its time--emanated from the drum held in the raised right hand of Lord Siva Nataraja. This science of sound and words remained a secret to most, for only the illumined could comprehend it, being unspoken knowledge directly from the Supreme Lord and beyond the reach of the ordinary mind.

Sages like Sanaka, Sanatana, Sanatkumara, Patanjali and others were able to hear the transcendental sounds of Siva's drum but were unable to grasp the inner, core meaning of the aphorisms. Legend says they approached Maharishi Nandinatha seeking an explanation. Moved by the sincerity of their search for this rare knowledge, the satguru proceeded to elucidate the essence of the sutras. He offered 27 verses, which are the only written teachings of this primal preceptor that have survived the tides of time, and thus form the oldest scriptural text from this Saiva Siddhanta lineage. Terse and wise, it is known as the Nandikesha Kashika. Kashika means "the illuminator."

It is said that Sri Nandikeshvara, as Maharishi Nandinatha is also known, accomplished the feat of explaining the inexplicable due to two things: his profound God Realizations, which gave him a oneness with Siva within, and the completion of a difficult, some would say impossible, austerity, that of reciting the epic chant Sri Rudram ten million times. Nandinatha's Kashika is more a meditation than an explanation, a contemplation on thirty-six constituents of the universe, from the most subtle to the very earth on which we stand--Lord Siva's unfoldment of the cosmos through sound, specific sounds that are embedded forever in the letters of the Sanskrit language. These constituents, or tattvas, are at the heart of the cosmology of Saiva Siddhanta, for in them can be found every level of consciousness, every element, every sense and color, every energy, vibration and sound that exists. Saiva Siddhanta speaks of 36 tattvas in all. Knowing the tattvas, one knows all.

The ancient texts are dense, convoluted and opaque, for in those days the secrets of yoga and inner consciousness were thought too precious to be openly expressed. So they were concealed in a special kind of language, like a cryptogram, assuring that only those who were qualified would have access; others would be confounded. Indeed, reading these texts today is confounding, as this glimpse into the far past, into the heart of the progenitors of yoga, the Himalayan masters, proves.

Without the insights and commentary of knowers of God and Sanskrit pandits of the highest order, even these aphorisms, composed to elucidate the even more arcane fourteen Siva Sutras, may defy understanding.

This entry was posted on Friday, September 14, 2018 at 3:53 am and is filed under Education, Saiva Siddhanta Church, Theology. You can follow any responses to this entry through the RSS 2.0 feed. You can leave a response, or trackback from your own site.

3 Responses to “Class with Our Satguru”