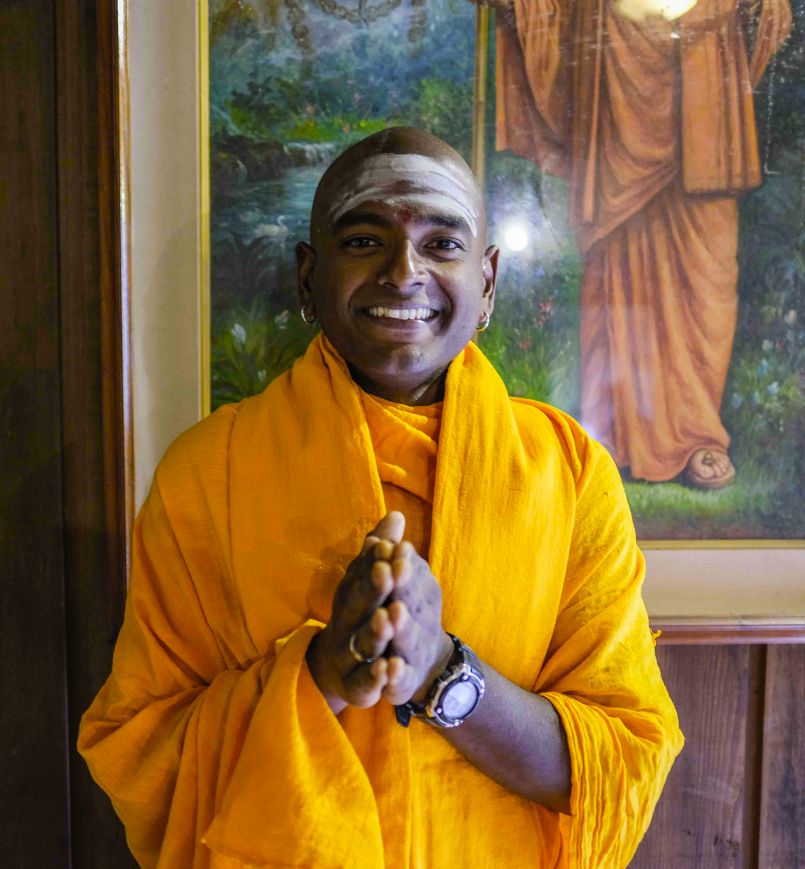 Today, while still astrologically Mahasivaratri, the monks gathered in the Guru Pitam to witness Natyam Dayanatha take his vows as a tapasvin and become Yogi Dayanatha. Jai!

After reading the addendum to his vows before Bodhinatha, Dayanatha and Satguru then signed them and Dayanatha received his yellow robes, large rudraksha mala and yellow pulnool. Here is a glimpse into this addendum:

"The path of the Saiva yogi is a difficult path. His striving is both inner and outer. Each yogi tapasvin is given a full complement of responsibilities in the monastery while at the same time being expected to ardently pursue his yogic practices. Each year, as he masters his duties, more responsibilities may be placed on his shoulders. He must be self-motivated and burning with desire for Self Realization to sustain the pressures of this life. The outer responsibilities strengthen his will and sharpen his mind, and he takes the thrust of this dedicated service into his meditations each day. During his daily yoga practice, he disciplines his awareness strictly, not pondering or planning his external duties and responsibilities, but turning one-pointedly within, pursuing progressively deeper levels. Thus, the yogi's life is not one of constant worship and meditation, but a dynamic balance of service and sadhana.

"Through all of his activities, he is 'yoked' to the within, remaining affectionately detached from worldly events. His life is a life of lessons--to gain the lessons from each experience is his goal. Thus, meditation serves him in two ways--first as an anchor to the within and second to reap the harvest of a lasting knowledge from experience. Tapas is both a pattern of Hindu monasticism and a state of being within that pattern when the kundalini is active. In speaking of this state of tapas, Gurudeva explains: 'Being in a state of tapas is a volcanic condition. It is an introspective confrontation of the soul and the ego in its many subtle, clever dimensions, having been hardened and fortified by promiscuity, dishonest dealings and other adharmic conduct in this or former lives. The crusty anava is audacious enough to claim itself as the soul. Naturally, the fiery force of the kundalini burns through and separates ignorance from intelligence, ego from soul. The fire of tapas is the unveiling grace of our Supreme God Siva. The ego, or anava, like the hardened stone, can only be melted and remolded in the fiery furnace of tapas, which only the yogi, with permission and guidance from the guru, can perform.'"

This entry was posted on Monday, March 4, 2019 at 4:35 pm and is filed under Monastery. You can follow any responses to this entry through the RSS 2.0 feed. You can leave a response, or trackback from your own site.

16 Responses to “Our New Yogi Tapasvin”