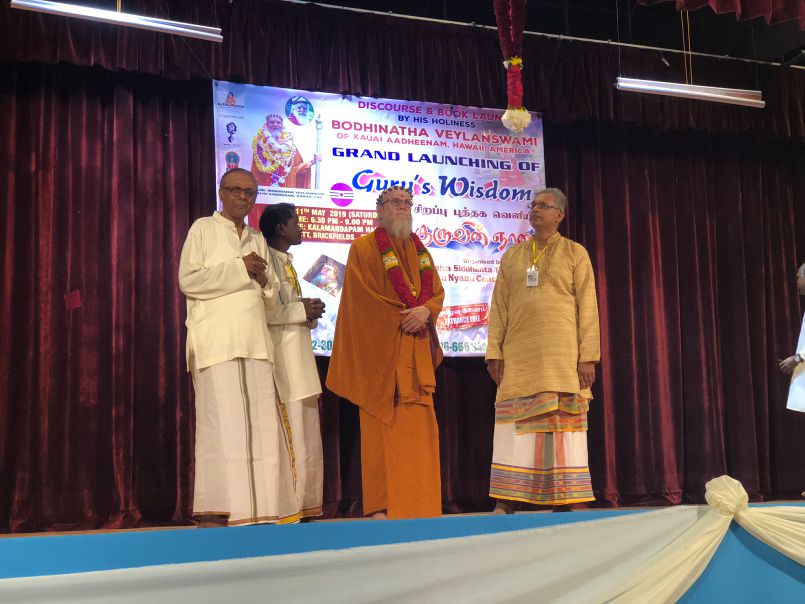 Satguru Bodhinatha Veylanswami and Sannyasin Shanmuganathaswami continue their adventure through Malaysia. Several evenings ago they attended the book launch for Guru's Wisdom. An unusually large number of VIPs from other Hindu groups attended and the Kalmandapam auditorium was filled with maybe 600 people, with some guests standing in the back and sides.

The program began around 7:00pm with Devaram singing by a children's group and an adult group who were both trained by a professional oodhuvar. There was short introductory speeches by the previous president of Malaysia Hindu Sangam and the current one, a dance, and then a 35-minute keynote about the book by Satguru. Next was a ceremonial book release and each VIP came forward and received a complimentary copy. To finish the evening Satguru give vibhuti blessing and signed books late into the night.

The two also enjoyed a morning visit to the headquarters of the Malaysia Hindu Sangam and an afternoon satsang with members, students and devotees at Iraivan Illam in Klang. The satsang included one samaya diksha, one vidya sishya pledge and two brahmacharya vratas.

This entry was posted on Monday, May 13, 2019 at 3:52 pm and is filed under Travel Missions. You can follow any responses to this entry through the RSS 2.0 feed. You can leave a response, or trackback from your own site.

One Response to “Malaysia Events Continue”