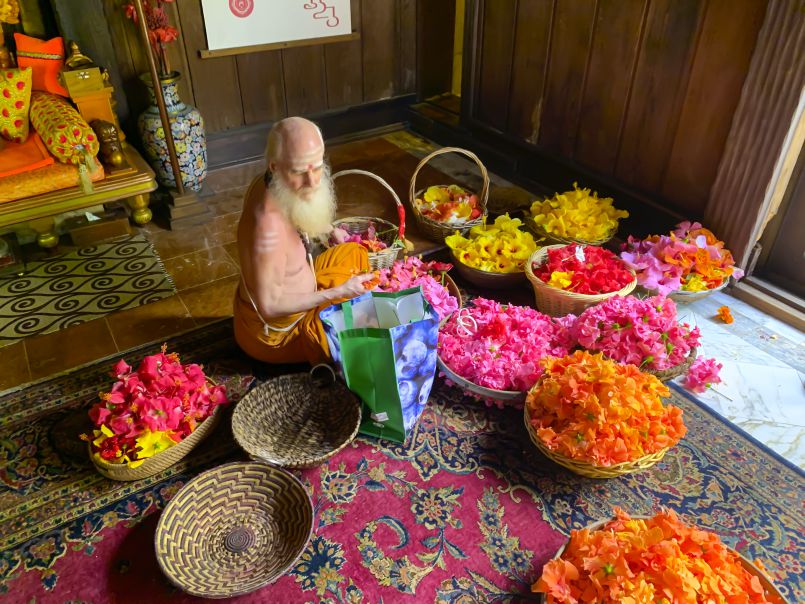 Yesterday the monks observed their monthly puja and abhishekam to Lord Nataraja during the Ardra Nakshatra. This day marks a lunar alignment with Ardra, a massive star in Orion and one of twenty-seven nakshatras or lunar mansions. During this time, Lord Nataraja's energies are potent and easily felt. This short article from Hinduism Today explains more about this special celestial body:

Ardra is the star that names one of the nakshatras, the 27 lunar mansions of Hindu astrology. It is known as Siva's star, a cosmic representation of His third eye, red and intense.

Called Betelgeuse in the West (a medieval Arabic name), it fascinates and consternates modern astronomers. Though it is one of the most studied of suns, it defies description, as it changes in brightness, size and even shape with rythmic gusto.

Scientists call Ardra "mysterious" and "elusive" in their published works, informally calling this massive orb "the dancing star." Hindus might find the name apt--after all, Siva is Nataraja, King of Dance.

Ardra is part of the constellation of Orion, shining as the brightest red star in the sky. Because of its blazing choreography, there is no certainty about how far it is from Earth, but the latest calculations point to around 725 light-years. Siva's star is colossal. For sake of comparison, if it were the size a football stadium, Earth would be a spec of dust, and the Sun no larger than a mango.

Ardra is nearing a transitional point in its evolution. Tomorrow, perhaps, or several thousand years from now--it will enter a supernova stage. In that act, marking the height of this cosmic performance, Ardra will convert most of itself into light and cosmic rays, sending its energy out to the universe in a blinding flash. When that happens, it will outshine the full moon in our sky for months and be visible even during the day.

After that, Ardra will be a small neutron star, unimaginably dense, spinning incredibly fast. Just a cup of matter from a neutron star's core weighs more than all the mountains of the Himalayas combined.

This entry was posted on Saturday, September 12, 2020 at 11:59 am and is filed under Festivals, Monastery. You can follow any responses to this entry through the RSS 2.0 feed. You can leave a response, or trackback from your own site.