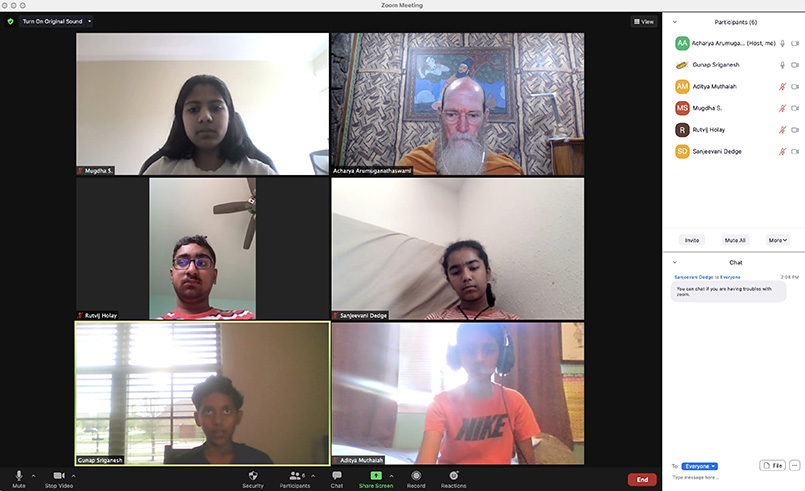 Yesterday Acharya Arumuganathaswami held a zoom meeting with part of our Hinduism Today Young Writers group. We discussed their planned articles for the coming issues. Mugdha, upper left, is a 6th grader in Cupertino, California, and has written a piece on “ethnic dress” day in school. It’s an annual affair where kids who want to dress up in the style of their particular ethnic group—sari for her, kurta shirt for her little brother. She talks about how the other kids react, what it means to each who participate and more. The story should be in the next issue of Hinduism Today (October/November/December). Rutvij’s has already provided two stories to the magazine, one in the April issue, one in July (at the press as we speak) and is working on a new piece about the treatment of Hinduism in popular media, such as TV shows and movies. Gunap, lower left, has been learning the thrice-daily worship practice of sandyaa vandanam from his father during the pandemic and is going to tell what it means to him. Aditya Muthiah, lower right, is scheduled to review the popular Raji video game set in India’s past. Sanjeevani, middle right, has also had stories in the April and July issues and is working next on both a poll of Hindu kids on issues impacting them and on the activities of various Indian cultural groups in the San Francisco Bay Area. It was a very productive hour-long meeting and you can look forward to seeing their articles shortly. They all get out of school the first week of June and will begin work in earnest.

This entry was posted on Monday, May 17, 2021 at 3:28 pm and is filed under Hinduism Today Magazine. You can follow any responses to this entry through the RSS 2.0 feed. You can leave a response, or trackback from your own site.