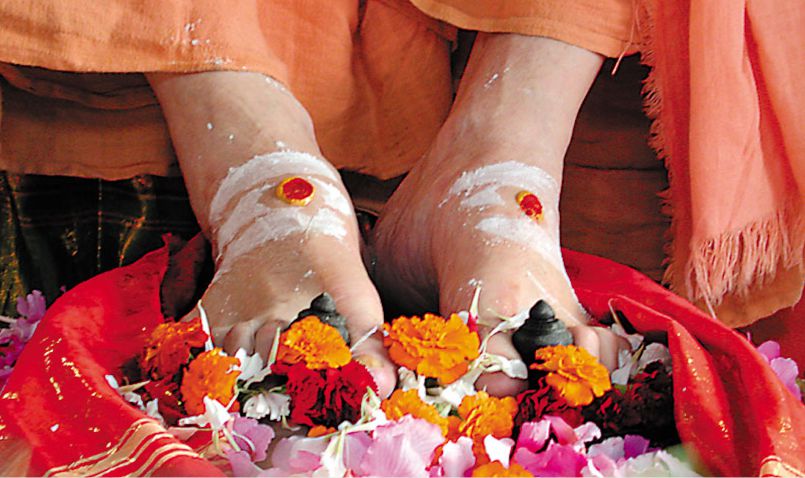 Today we open The Guru Chronicles and from the Introduction hear Gurudeva's upadesha on the nature of the guru and the worthy disciple:

India has always been the cradle of spirituality. During his 1895 lecture tour to India, Mark Twain wrote, "India is the cradle of the human race, the birthplace of human speech, the mother of history, the grandmother of legend, and the great grandmother of tradition. Our most valuable and most instructive materials in the history of man are treasured up in India only!"

What spared Hinduism the oblivion that claimed every other ancient faith? It cannot have been mere good fortune. India is a difficult land in itself, and its history is marked by the repeated absorption of whole races and religions from beyond its borders. In addition, it has had more than its share of foreign invaders, natural disasters and internal wars. Yet, drawing from some secret sustenance, Hinduism nourished with persistent vitality and retained its grip on the soul of India, never failing to inspire, never fading, ever renewed and strengthened from within. We can well ask who is responsible. Who kept the religion alive in the mind of man through all these millennia? Who keeps it vibrant and inwardly strong today? How many were they? Where do they live? How was it done? The answers lie, in part, in the pages of this book. Satguru Sivaya Subramuniyaswami, whose life story ends this biography, explained:

"Among a thousand devout Hindus, one or a few will abandon the world for a stricter path, living in seclusion by a river, in a cave in the hills or wandering, the sky his roof, God his landlord. Each Hindu looks up to the swami or sadhu, knowing they will one day be where he is now. Among a hundred thousand such tapasvins who search for God, one, or ten, will and That which all souls are seeking, so high is the summit, so steep the ascent. Realized saints and sages are rare, but never absent in India. Their absence would leave it a land like any other. Their presence makes it holy.

"Every Hindu generation has produced its farmers, lawyers, mothers, kings, beggars, scholars, priests, swamis and God-men. Yet all of these souls together do not carry or sustain the full force of the Sana-tana Dharma, for they cannot. They are each engaged in their own desires, their own affairs or their own quest. Their search continues. They do not yet possess the fullest knowledge; they have yet to accrue their soul's full maturity. Even after God Realization, the soul continues to evolve. It does not vanish, nor does the world disappear. An enlightened man can help many forward on the spiritual path, according to his maturity of soul. Whose mission is it to guide whole generations? Who turns from their search to guide hundreds of millions on their way? Only those whose search is utterly ended, only the perfected souls who have become the goal itself.

"Such men live; such men have always lived. They are known as siddhas, which means "accomplished ones" or "perfected ones." They are a special class of yogis, each a fully matured soul and heir to the inner force and subtle knowledge of the Sanatana Dharma even as the masses of India are heir to its outer precepts and practice. They hold the power of it and protect its destiny. One with Siva, they speak and behave only in expression of the will of God.

"All gurus differ one from another depending on their parampara, or lineage, as well as on their individual nature, awakening and attainments. Basically, the only thing that a guru can give you is your-self to yourself. That is all, and this is done in many ways. The guru would only be limited by his philosophy, which outlines the ultimate attainment, and by his own experience. He cannot take you where he himself has not been. It is the guru's job to inspire, to assist, to guide and sometimes even impel the disciple to move a little farther toward the Self of himself than he has been able to go by himself.

"The satguru is needed because the mind is cunning and the ego is a self-perpetuating mechanism. It is unable and unwilling to transcend itself by itself. Therefore, one needs the guidance of another who has gone through the same process, who has faithfully followed the path to its natural end and therefore can gently lead us to God within ourselves. Remember, the satguru will keep you on the path, but you have to walk the path yourself.

"It is the disciple's duty to understand the sometimes subtle guidance offered by the guru, to take the suggestions and make the best use of them in fulfilling the sadhanas given. Being with a satguru is an intensification on the path of enlightenment always challenging, for growth is a challenge to the instinctive mind. If a guru does not provide this intensification, we could consider him to be more a philosophical teacher. Not all gurus are satgurus. Not all gurus have realized God themselves. The idea is to change the patterns of life, not to perpetuate them. That would be the only reason one would want to and a satguru.

"Some teachers will teach ethics. Others will teach philosophy, language, worship and scriptures. Some will teach by example, by an inner guidance. Others will teach from books. Some will be silent, while others will lecture and have classes. Some will be orthodox, while others may not. The form of the teaching is not the most essential matter. What matters is that there be a true and fully realized satguru, that there be a true and fully dedicated disciple. Under such conditions, spiritual progress will be swift and certain, though not necessarily easy. Of course, in our tradition the siddhas have always taught of Siva and only Siva. They have taught the Saiva Dharma, which seeks to serve and know Siva in three ways: as Personal Lord and creator of all that exists; as existence, knowledge and bliss the love that flows through all form and finally as the timeless, formless, causeless Self of all."

This entry was posted on Monday, August 2, 2021 at 3:55 pm and is filed under Archives. You can follow any responses to this entry through the RSS 2.0 feed. You can leave a response, or trackback from your own site.

2 Responses to “Nature of the Satguru”