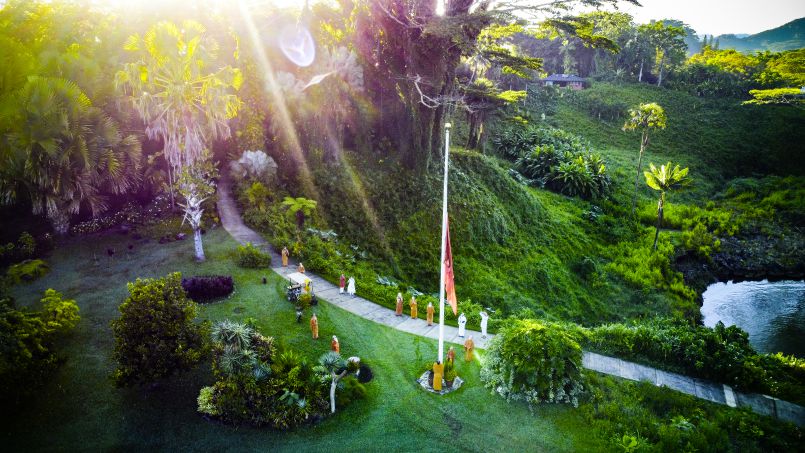 Today is the first full day of our new season, the Jivana Ritau. Early yesterday morning, the monastics gathered in Kadavul Temple for a homa, a Vedic fire ceremony, and then proceeded out the the aadheenam's flagpole to fly the dvaja for the new season.

Excerpts from Saiva Dharma Shastras about the this time of year:
"Beginning with Hindu New Year in mid-April, three seasons of the year divide our activities into three great needs of humankind the learning of scripture in the first season, Nartana Ritau; the living of culture in the second season, Jivana Ritau; and the meditating on Siva in the third season, Moksha Ritau. Thus we are constantly reminded that our life is Siva's life and our path to Him is through study, sadhana and realization. In ritau one, we teach the philosophy; in ritau two, we teach the culture; and in ritau three, we teach meditation.

During Jivana Ritau, the rainy season, from mid-August to mid-December, Living with Siva: Hinduism's Contemporary Culture is the primary text. The key word of this season is work. The colors are rust, copper-maroon and all shades of red rust for earthy preservation, copper-maroon for fulfillment and red for physical energy. The Aadheenam's flag pole flies the rust-colored dhvaja, symbolizing environmental care. Copper-maroon and all shades of red adorn our smaller flags. This is the season of honoring and showing appreciation for those in the vanaprastha ashrama, life's elder advisor stage. The focus is on preserving what has been created, manifesting goals and fulfilling plans made in the past. Inwardly the emphasis is on direct cognition and caring for the practical details of the external world. Practicality is a word much used this season."

This entry was posted on Wednesday, August 18, 2021 at 5:34 pm and is filed under Monastery. You can follow any responses to this entry through the RSS 2.0 feed. You can leave a response, or trackback from your own site.

2 Responses to “Raising the Flag for the 2021 Jivana Ritau”