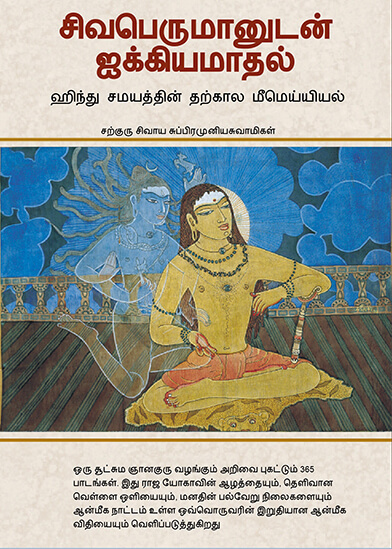 Today we announce the initial release of a digital edition of Gurudeva’s Merging With Siva in the Tamil Language.

The translation was done Ram Prasad Lakshmana Rao in Chennai. It was begun in September of 2020 and completed in July, 2021. Shanthi Suresh from Los Angeles proof read the work. As a close shishya of our parampara, she expressed that Ram did very well in rendering Gurudeva’s teachings into Tamil. Currently you can download a PDF or EPUB (without images) here: himalayanacademy.com/view/merging-with-siva-tamil_ta and in the near future a web view version will be also be made available.

This entry was posted on Wednesday, August 25, 2021 at 5:00 pm and is filed under Publications. You can follow any responses to this entry through the RSS 2.0 feed. You can leave a response, or trackback from your own site.

4 Responses to “Merging With Siva Now Available in Tamil!”