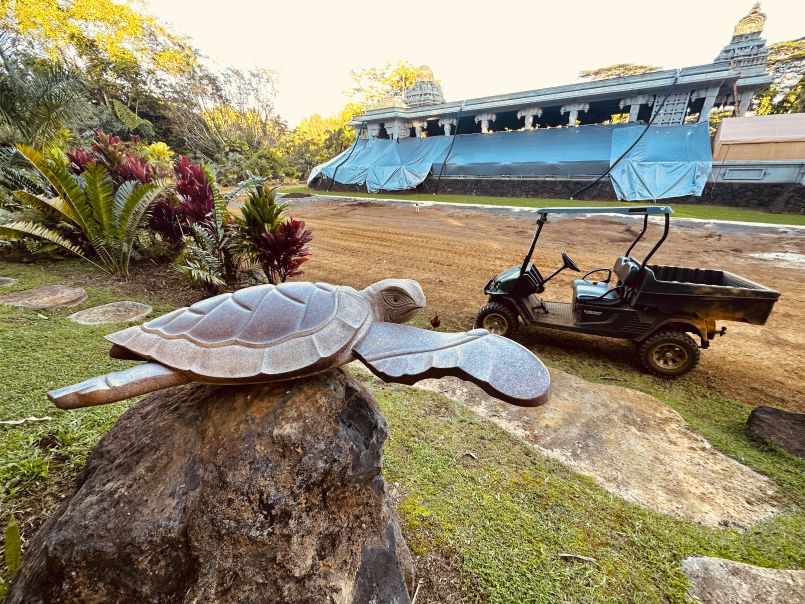 The silpis have reinstalled our rose granite turtle near Iraivan. It is one of the small carved marvels that pilgrims stumble upon in their explorations of the sacred gardens. The short story is that the fins were broken after it arrived from the Artha Enterprises worksite in Bengaluru four years back, so new ones had to be carved. They arrived in November and have been affixed in the last few days. This honu, symbol of widsom and good fortune, sits on his rock overlooking Iraivan Temple. With thanks to our multi-talented silpis.

Some honu facts: The Hawaiian turtle, also known as the honu, is a beloved symbol of good luck and longevity in Hawaiian culture. These gentle sea creatures can often be found basking on the sandy shores or swimming gracefully in the warm waters of the islands. With their green and yellow shells and friendly faces, honu are a cherished sight for both locals and tourists alike. In Hawaiian tradition, the honu is seen as a symbol of wisdom and is said to bring good fortune to those who are lucky enough to spot one. They also play an important role in Hawaiian marine life and are protected under state law. Whether you're swimming with them, watching them sunbathe, or simply admiring them from the shore, the honu is a truly special and revered creature in Hawaiian culture.

The honu is also commonly known as the green turtle. It gets its name from the greenish color of its cartilage and fat, which is visible through its translucent skin. The green turtle is considered an endangered species globally, according to IUCN Red List. Human activities such as hunting, egg collection, coastal development, pollution, and accidental capture in fishing gear have all contributed to the decline in green turtle populations. Conservation efforts are in place to protect the species and its habitats, such as protected nesting beaches, but more needs to be done to ensure the survival of this magnificent animal.

This entry was posted on Monday, January 16, 2023 at 10:21 am and is filed under Sacred Gardens. You can follow any responses to this entry through the RSS 2.0 feed. You can leave a response, or trackback from your own site.