The Story of Stone

Granite's remarkable qualities make it unsurpassed media for building structures, creating artistic forms and communicating with fellow human beings across the millennia. It's abundant--about 30% of the volume of continents. It's durable--capable of withstanding erosive forces better than almost any other rock. No wonder India's craftsmen chose it for their holy sanctuaries. 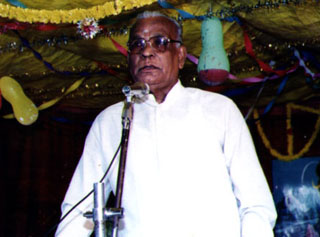 Granite is among the oldest of rocks. India's repositories are 2.5 billion years old, and samples have survived 3.8 billion years, very near the beginning of Earth's birth. All granite is recycled, born-again stone, most of it reformed many times throughout geologic history. This happens when feldspar, quartz and other minerals mingle when melted above 850.C, as they continuously do in some volcanos, in places where continents collide and in the planetary furnaces 60 kilometers below the surface.

It is in stone that many of the great achievements of the human spirit have been enshrined--from the Great Wall of China to Cambodia's Angkor Wat, from Egypt's hieroglyphic language tablets to Michaelangelo's David. The most long-lived heritage of stonework comes from India, where the masters still live and carve. One, the eminent Shri Vaidyanathan Ganapati Sthapati, traces his lineage to the 6th century Chola dynasty. In the following presentation he gives voice to a 6,000-year-old tradition.

THE SOUL OF STONE

According to the shilpaic tradition, nothing in this universe is inanimate. Stone contains the All-Pervasive Energy. It is a living entity. It is one of the manifestations of the Primal Energy, Shakti. Shilpis call this shakti Paravastu, literally the :"ultimate luminous substance." Thus, rock or stone is held as divine in Hindu tradition.

Stone, when touched, is felt to be cold. This is due to its moisture content. When two pieces of stone are brought into collision, fire is produced. Hence stone contains fire. Stone is earth in consolidation of particles of earth. Stone contains pockets filled with air. Stone, added to this, has the quality of space in that it echoes sound. Thus, stone is a composite of the five elemental substances--water, fire, earth, air and space. Stone is the final product of the ultimate Energy.

Also, there is one special quality attributed to celestial space as well as earthly space. This is Absolute Sound. We have stones with audible resonance, demonstrated by the famous "musical pillars" found in some temples. The Shivalinga, which signifies Cosmic Space, is always made of a resonant stone. Apart from this, stone has many unique qualities. It is said to live longer than any other material on earth. Hence the tradition of producing temple buildings and temple Deities has taken deep roots in the tradition of stone.

There are three basic types of stones. One produces a metallic sound like that of a bell, another variety gives a slender, long note and a third has no sound at all. They are respectively called "male," "female" and neuter." Shastras prescribe male stones for male images, female stones for female Deities and neuter stones for temples stones and homes. Stones containing marks of gold are held even more sacred than resonant pieces.

A yogic intimacy develops between a stone carver and his stone. That is why the Shastras say that the shilpi should always be joyous and of good spirit. According to tradition, a grief-stricken shilpi produces a sad form. The worship of such a form produces bad effects on the worshiper.

The trainees are also expected to study religious concepts of the Koyil Samayam. "temple religion." according to vastu tradition, the temple itself is a form of God, as well as the home of God. These two concepts are still preserved in the Hindu religion, though the former concept is not well known to the philosophers. On the consecration day, the sacred water contained in a gold pot is taken out and poured over the vimana building. Only thereafter does the consecration of the Deity in the imagic form, kept inside the sanctum, take place. A well known saying captures the spirit quite simply, "Look upon the temple as the form of God and offer worship." The sthapati and the shilpis are supposed to internalize these spiritual concepts so that the sculptor becomes the sculpture, the architect becomes the architecture, just as the poet becomes his poem.

For Hinduism to flower, flourish and continue to exist in India, two branches of culture science have been responsible and powerful since a very remote past. One is called vastu shilpa, the art and architecture tradition, and other other is the Agamic religious tradition with all the codes of liturgy and temple ritual. The Agamas do deal with art and architecture, but not as extensively as do vastu texts. In fact, a common source for the Agamic tradition has been the ancient Vastu shilpi texts. Even Jains and Buddhists use them. The manasara Vastu Shastras, by Maharishi Manasara of the shilpi clan, contains extensive details of iconometrical and iconographical material of the Hindu pantheon consulted by shilpis of North and South India.

For millennia, shilpis (sculptors) and sthapatis (sculptor-architect-builders) worked in tightly-organized guilds. Training was hereditary, from father to son, and started formally at the age 12. Students were given practical training, not in a separate college, but right in the workshop, where large projects were being executed under an aged and experienced sthapati. At night and in the early pre-dawn hours, they receive theoretical instructions in the Vastu Shastras (ancient architecture manuals) and allied science. They were taught measuration, geometry history and drawing. They were expected to know music, dance and yoga. Town and village planning and house construction were taught. They learned to regard houses and villages as spiritual entities, living organisms. A complete training extended for not less than 10 years. Thereafter, the father or teacher would take these boys from place to places, where the guild had secured prestigious projects.

The shilpi who matured into a sthapati was expected to be a master of proportions. The vastu concepts are brought out into visual lines and forms by a unique marking technique applied on the stone during the carving process. The carvers carve on the stone following the lines and forms marked out on the stone by the more competent sculptors. Superficially, this may seem mechanical, but it requires great skill and years of experience. One who works on architectural stones is called a takshaka, and one who works on a sculptural pieces is technically called a shilpi.

India's shilpis have for millennia been holders of the knowledge of the vastu tradition and worshippers of Shakti. This is the Vastumatam, vastu "religion." This is also called Mayamatam, name after its originator, Mayan. The shilpis accordingly worship Goddesses kali, Kamakshi, Ankalaparameshvari, Akilandeshvari, Bhuvaneshvari and Brahma Chamundi. Science, shakti and bhakti are integrated in the life of the shilpi.

On Vijayadashami day, shilpis worship the five-headed Vishvakarma and also their personal tools. The Shastra texts that they hold sacred are also worshiped. At day break on Vijayadashami day, the shilpis, amidst joy and merriment, start carving work on fresh pieces of stone preceded by the shilpi guru. The shilpis' children are initiated into the craft on this day.

From rock to sculpture, there are rituals pujas that the sthapati performs. He has to do puja to Vishvakarma and Vastu Purusha while initiating stone quarrying for each new work. There is another puja where the shilpis assemble to give the initial stroke at an auspicious moment with a golden hammer and chisel, followed by their assistants. Sometimes a guru or the sponsor gives the initial stroke, though this is rare.

Another puja of great importance is the "chiselling of the eye" or netron meelanam. This means opening the eye of the God, in idol form, preceding installation. This is attended to by the project's chief sthapati. No one else may even watch. The reason is that while carving the shilpi causes irritation to the eyes. Such irritated eyes should not gaze on others. The sthapati, being mother of the form given birth to, is exempted from the effects of the irritated vision.

Fortunately, modern technology has not laid its hand on the vastu tradition. The ancient tools remain. They are handy, flexible and very cheap. During my career, I actually tried to introduce mechanical devices-but in vain. For work of this delicate, aesthetic nature, machines are useless. The traditional tools are time-tested and honored. All tools for stone carving are locally made and of a special character.

Unfortunately, our vastu shilpa tradition has mostly come to be looked upon as totally mechanical, and the shilpis of this honored tradition as mere workmen. There remains little insight into or knowledge of the stoneworkers' extraordinary and abundant contributions to the culture and civilization of Bharat.

One key factor adding to this marginalization is that all available texts on vastu and shilpa are in sanskrit and highly technical. They do not speak of the intuitive, feeling base of artistic creations. No real text exists in any of regional languages. No illustrations are found as in the classical and contemporary art and architecture of the West.

The stoneworker's craft is not widely known for another reason: the shilpi experience has remained within the shilpi guilds. They only spoke with the patron kings. What they were doing and how, nobody knew or inquired about. The history of the rishis who gave birth to the tradition has remained shrouded,. Fortunately, this absolutely spiritual tradition is being re-recognized of late by many scholars and researches, and the tradition is coming back to life. It is gaining ground. The incrustations are being scraped off and the naked beauty of this sacred and scientific tradition exposed.

Tala is rhythm. Through talam, the shilpi creates and his own feelings take form. He feels transformed into the gross forms that he has created. Seeing himself in the forms, he experiences inestimable joy. He looks upon them as atmajans, his own sons and daughters in flesh and blood. The shilpi is jivatman, the microcosm. The macrocosm is the Paramatman. As they resonate with each other, in the same way two veenas set to same pitch resonate, they lose their individual identities. This is advaitic experience. This is atma samyoga, the soul's experience of oneness. This is pure love and the ultimate goal of life. This is what the vastu shilpa tradition has been doing ever since it appeared on the cultural scene of the Indian subcontinent.