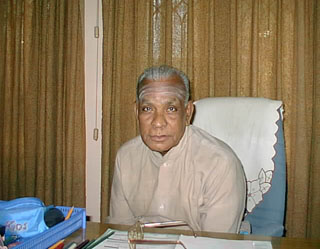 Shri Vaidyanatha Ganapati Sthapati, 71, is one of the most prominent sthapatis (temple builders) alive today. He studied the arts of stone carving and sacred architecture-- the Vastu Vedic tradition-- under his father and uncle and took degrees in mathematics and Sanskrit. For 27 years he served as principal of the Government College of Architecture and Sculpture at Mamallapuram, India. During his time, he worked to revitalized an ancient art imperiled by technology's usurpation of the whole hand-crafted way of life and its deeply spritual and aesthetic priniciples. He also personally trained many outstanding shilpis (sculptors) and designed and built temples in India and in many foreign countries including United Kingdom, USA, Singapore, Malaysia, seychelles and Fiji. He is presently carving a 133-foot-high statue of the weaver/saint Tiruvalluvar on a rock island just off the coast of India's southern tip, near Kanyakumari. One of his most acclaimed oriiginal works is a sculpture of the legendary dancer Madhavi which took him a year and a half to carve with three assistants.

To articulate and spread the shrouded principles of the stone carving science, he founded the Vastu Vedic research Foundation, which now publishes its own magazine. In June 1992,he released a magnificently filmed, award winning video, Vastu Purusha on the stone carving tradition. In a broader arena, Ganapati Sthapati has become one of the most outspoken critics of India's near abandonment of the aesthetic ideal in contemporary industrial and residential design. Brick on brick, block on block, steel girder on steel--designs apathetically bent toward the ugly even when, at no more cost, greater beauty in both form and material could have been achieved.

Ganapati Sthapati is a devout Hindu, disappointed by the educated/secularist/atheistic thinking brainwashing India. His efforts to reverse this decline are inspiring, but no list of his religious works would reveal his spritual moorings as clearly as this wonderful personal experience. He recounts: "The basic prerequisite for the sthapati is his devotion to his tradition and to the God he sculpts. As he is the creator, he assumes the status of a mother in the process 'Mata-Shilpi' mother sculptor."