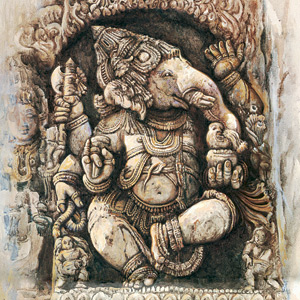 The northern entrance leads to the gateway of the Sanctuary itself, which will be graced by a large, ornate, traditional South Indian style stone arch. Each visitor's journey begins on an 8-foot-wide path heading down in elevation and south through landscaping of neem and konrai, or golden shower trees, palms, dwarf coral shower trees and heliconia, with tall, blue gum eucalyptus, Java plum, cinnamon and camphor trees just to the west. The whole Sanctuary slopes down from the north to the south, a gentle decline that leads to the emerald green Wailua River. The walk on the path is the beginning of the visitor's opportunity to disengage from the normal cares and patterns of his or her life, a loosening or liberating from everyday thoughts and worries. The 1/2-mile straight path runs through a pungent blend of mature, exotic Hawaiian, Amazonian and Indian landscaping, sparkling waterways and groundcover-festooned rockeries. Along the way, pilgrims are first greeted by a shrine to Lord Ganesha, the Hindu God of Art, Science and Culture, on a bridge over a small valley amidst the dangling tendril-like roots of a giant banyan tree.