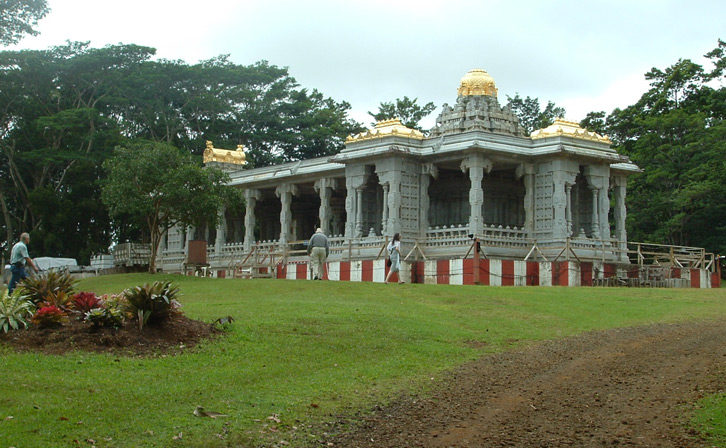 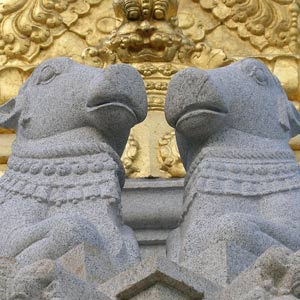 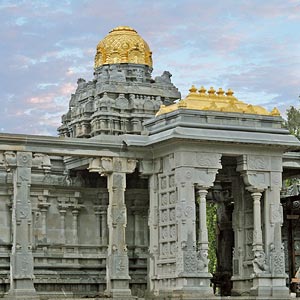 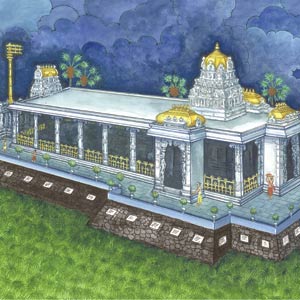 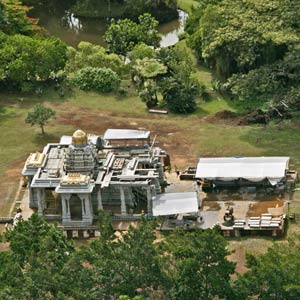 Temple under construction in 2005

Gurudeva decreed that Iraivan, an ancient Tamil word for God, would contain images of no other Gods than the Great Supreme God, Siva. As if one had stepped back 1,000 years or more into ancient, tropical South Asia, this religious edifice is magnificent to behold amid the unspoiled Hawaiian landscape.

A temple of this quality and design is both science and spirit. It is geometrically rigorous, a nesting of rectangles inside one another, the granite medium--rich in quartz crystal--serving as a resonating chamber. Fabulous stone pillars, intricately carved bas-relief wall blocks, beams, ceiling slabs, floor pieces and curvilinear capstones all interlock in a stunning creation of architecture from one of the most innovative eras of human history. This temple, though not cavernous and acre-covering like its ancient sister temples in India, is endowed with sculpting that is not only uplifting art, but actually conveys teachings. Gurudeva explained that the 240 carefully planned images of Saiva Siddhanta philosophy, worship and metaphysics, Indian and Hawaiian sacred plant life and other symbology carved into 24 of the temples 40 pillars would be "a library in stone." No visitor, whether secularly, culturally or religiously minded, will stand between the massive granite elephants composing the temple's formal entrance and not feel a deep impact of well-being and regard for humankind's higher aspirations.

The geometry of the temple, following India's 4,000-year-old design codes, telescopes out from the innermost sanctum, a stone chamber containing a 3-foot-tall, six-sided, 700-pound quartz crystal Lingam, the mark of God Siva as Absolute Reality, the formless in form. The crystal's six sides rise to a single sharp point, and while the sides approach the smoothness of a polished gem, they are entirely a product of nature. No hand, tool or machine has altered this crystal. Its morphology and mass is wholly a molecular construct of nature, 50 million years in the making.

Similarly, the temple stonework--including white, black and rose granite--is not the result of machine blades, lathes and polishing grinders. From quarrying to final finish, the stone is virgin to machines. Each granite piece is cleaved, carved and polished by the hands of craftsmen and artisans, using draftsman skills and hand-held tools millennia old.

The use of fly-ash concrete technology for the 1,000-yard foundation was a pioneering effort, the first-ever massive pour devoid of reinforcing bars. From subterranean foundation to the pinnacle of the main capstone, the temple is engineered to thrive through 1,000 years--until the 31st century. It is an extraordinary time span, filled with the promise of protean changes in global society, human consciousness and Earth environment. Through century after century, the San Marga Sanctuary with its stone-mass Siva temple will be inspiring, uplifting and transforming visitors from near and far shores. This 1,000-year criteria for the temple is a unique approach in modern temple building.

The temple, too, is historic in that it is the first all-stone, hand-carved Hindu temple constructed in the Western Hemisphere. Large-scale and complex stone temples have been constructed outside of India in Indonesia, Vietnam, Cambodia and China during the great expansion of Indian culture from the 9th to 14th centuries. The Sanctuary's Iraivan Temple is the first granite temple erected in the new territories of Indian culture, the West.

Next: Path of the Tamil Saivite Saints