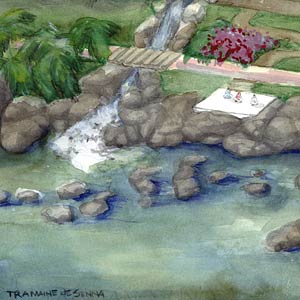 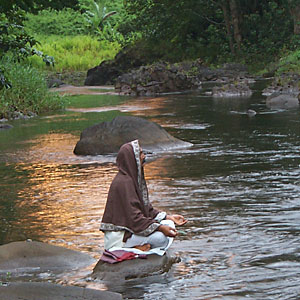 Beyond the pavilion, pilgrims proceed through an open meadow slope heading for the stone-brushing sound of the Wailua River. This steep, wide meadow will be accented with rare trees and observation decks. At the meadow's bottom, on the southern edge of the Sanctuary, flows the river, a transparent moss green color churning over rocks and boulders. The Wailua runs the entire length of the southern boundary of the Sanctuary, fed continuously from rainfall and the swamps at the top of Mount Waialeale. The river ridge path turns east here, skirting the river, with small trails breaking off down to scenic meditative lookouts. Along the way are small groves of rainbow eucalyptus, giant albizia, exotic bamboos and rare palms.

Smaller paths diverge east from the entrance steps of the temple, continuing along the river bank to a series of small landscaped terraces next to a dramatic rock falls, called Bali Hai, created by the waters from the Sanctuary flowing over tall boulders, rushing toward the Wailua River. This is a favorite place, already frequented by pilgrims, for reflection, healing solace and yoga meditation. Other trails take visitors to lookout points on the river as it drops over a short rock-chute falls into a 150-foot-diameter natural rock pool, emerald green due to its unusual depth. Called Nani Kaua, "beautiful rain," by the ancient Hawaiians, the natural rock pool and its falls form the visual and mystical heart of the adjoining parcel where live the monastics who oversee Iraivan Temple and the San Marga Sanctuary.

Next: Steps to Iraivan