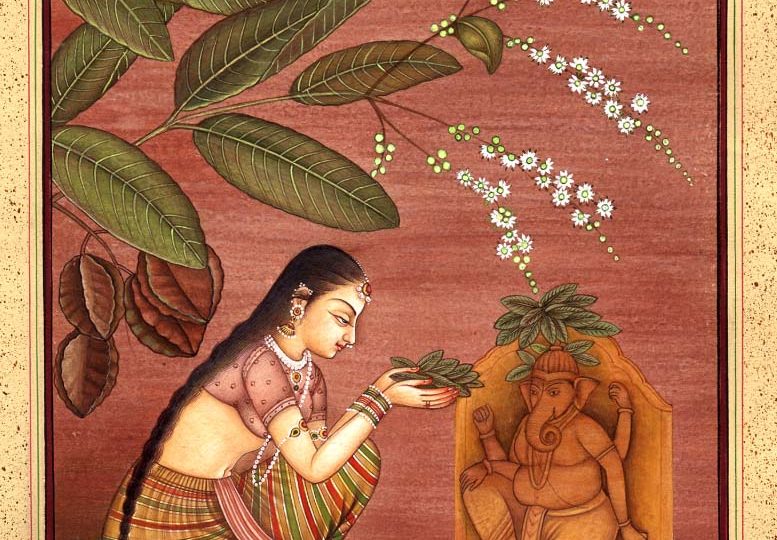 A saint of Tamil Nadu (ca 200 BCE), a contemporary of Saint Tiruvalluvar, devotee of Lord Ganesha and Karttikeya and one of the greatest literary figures in ancient India. As a young girl, she prayed to have her beauty removed so she would not be forced into marriage and could devote her full life to God. She was a great bhakta who wrote exquisite ethical works, some in aphoristic style and some in four-line verse. Among the most famous are Atti Chudi, Konrai Ventan, Ulaka Niti, Muturai, and Nalvali. Her Tamil primer is studied by children to this day. Another Saint Auvaiyar may have lived in the ninth century.

In this famed poem of the second century bce saint Auvaiyar she offers terse advice for youngsters, one topic for each letter of the Tamil alphabet, beginning with A.

In Praise of God

Let us always respectfully praise the Lord (Ganesha) Who is sitting on the lap of the Lord (Siva) who is wearing a garland of Thiruvaatti flowers.

3. Do not refuse to give what is possible to give away.

4. Do not prevent acts of charity.

5. Do not boast about your possessions.

6. Do not give up industriousness.

7. Do not despise mathematics and writing.

10. Live in harmony with the world.

11. Do not discontinue recitation.

12. Do not speak envious words.

13. Do not short-sell the amount of grain given.

14. Do not speak about what you did not see.

15. Bend like the letter “nga” to do physical labor.

16. Take an oil bath on Saturdays.

18. Do not build a house that is too spacious.

20. Protect your father and mother.

21. Do not forget gratitude.

22. Plant a crop during the proper season.

23. Do not make a living by grabbing others’ land.

27. Do not speak deceitful words.

28. Do not do disrespectful things.

33. Protecting others is a sacred commitment.

36. Do not give up that which is high-minded.

37. Do not become estranged from good friends.

39. Make ongoing efforts to listen to words of wisdom.

40. Do not hold back in teaching a handicraft.

43. Give up vilifying others.

46. Do not speak hyberbole.

47. Do not forget to strive for renown.

51. Approach a person, ascertain his or her nature and then befriend.

52. Do not wander with insults.

53. Do not be careless when speaking.

54. Do not move through life in an apathetic manner.

55. Move through life so that you are a worthy person.

56. Desire to be charitable.

58. Give up wrongful actions.

59. Do not bring suffering on yourself.

62. Live in harmony with your countrymen.

63. Do not listen to women’s conversations.

64. Do not forget ancient times.

67. Act in ways that are acceptable to the country.

68. Do not depart from a good position.

69. Do not play in dangerous waters.

70. Do not eat tidbits that are unhealthy.

74. Do not become involved in destructive actions.

75. Do not speak insulting words.

76. Do not bring illness on yourself.

77. Do not utter vulgarities.

78. Do not associate with people who are like snakes.

81. Protect and cherish your supporters and prosper.

82. Plough the land and cultivate crops.

83. Procure the support of great men.

85. Do not associate with the immature.

86. Protect your wealth and prosper.

87. Do not cause quarreling to occur.

89. Do not accommodate your enemy.

90. Do not speak excessively.

92. Do not tarry where warfare has broken out.

93. Do not associate with obstinate people.

94. Hug your wife of tender nature and good character.

95. Listen to the words of high-minded people.

96. Keep away from a house of immoral women.

98. Give up infatuation for that which is impermanent.

100. Do not argue with elderly, wise people.

104. Live amicably with the people around you.

107. Rise from sleep before daybreak.

In Praise of God

Let us worship ever the Feet of the son of the Lord (Siva) who is wearing the konrai garland.

3. Householder dharma is the only excellent dharma.

4. The wealth of misers will be taken by dishonest men.

5. Eating less is an excellence in women.

6. Dislike of those around you destroys long-established ties.

7. Numbers and letters are mankind’s eyes.

8. Children who obey without instructions are parents’ amrita.

9.  Do your duties even if you have to engage in begging.

10. Marry one and carry on with that person.

11. For a brahmin good conduct is more important than skill in recitation.

12. Speaking with envy will lead to destruction.

15. The excellence of a woman is in protecting her virtue.

16. Forget that which is unattainable.

17. Speak in humility even to one who is low in social status.

18. No friends and relations for fault finders.

19. Do not brag about bravery even though you have arrows in hand.

22. True wealth is that of education and not the wealth that you have on hand.

23. Friendship with the king is help when in need.

24. Backbitings told to a fond listener will spread like fire fanned by the wind.

25. A vilifier becomes a foe to everyone.

26. Excellence for the continuation of descendants is to avoid family planning.

27. Excellence for parents is to hear their progeny acclaimed wise.

28. Excellence in austerity is to worship Lord Siva.

30. Excellence for friends and family is to stand by one in prosperity and adversity.

31. To gamble and argue causes vexation.

33. Even if shut up in prison get nighttime sleep.

34. As your wealth permits share with the poor and then eat.

35. The pure will acquire wealth.

37. No mantra is better than one’s father’s advice.

38. No temple is greater than one’s mother.

39. Pursue wealth even if it means going overseas.

41. Overbearing women are like embers hidden in the abdomen.

43. If God is angered the practice of austerity is fruitless.

44. Spending without earning ends in ruin.

45. Sleep under a thatched roof in Thai and Maasi months.

46. To plough and eat is sweeter than to fawn and eat.

47. Do not speak of your ignorance even with friends.

49. As the entire nation prospers, evil is dispelled.

50. The merit of perfect learning is to refrain from going back on one’s words.

51. Live in a town where there is water.

52. Even on trivial matters act only after careful deliberation.

53. Learn the accepted course of conduct and then live it well.

54. No cunning thoughts can pass without mind’s awareness.

55. No good are austerities not done properly.

56. Though one may refrain from injuring, do not speak insulting words.

57. Even those whose achievements are insignificant deserve praise.

58. Austerity is not killing and eating the meat.

59. The merit of one’s good deeds can be seen in the stored grain from growing a crop.

60. Though it is food mixed with milk, eat at the right time.

61. It is a virtue not to covet another’s wife.

64. The low-bred have no cultured conduct.

65. The wise have neither wrath nor foes.

66. Feigning ignorance is an ornament to women.

67. Take measured steps and the world will hold you up.

69. Food is that which comes through one’s ploughing the fields.

70. Even if it is elixir of life share it with guests.

72. Every lightning brings rain in its wake.

73. A ship without a pilot will not sail.

74. Evil done in the morn begets the evil reward in the evening.

76. Excellence in sleep is to sleep on a mattress.

77. Wealth made by ploughing never gets reduced.

78. Keep away from a house of immoral women.

79. Ignore the words of the wise and your efforts will get ruined.

80. Silence is the brim of wisdom.

81. Though a farmer, assess your harvest and live accordingly.

83. A house without guests is lacking in proper virtues.

84. Friendship of the brave is like having a sharp arrow.

85. The respectable do not beg even in misery.

86. To be energetic is excellence in acquiring wealth.

87. There is no cunning for those whose thoughts are pure.

88. None can help when the king is angered.

90. Sleep in a suitable place.

91. Those without proper learning lack proper conduct and knowledge.