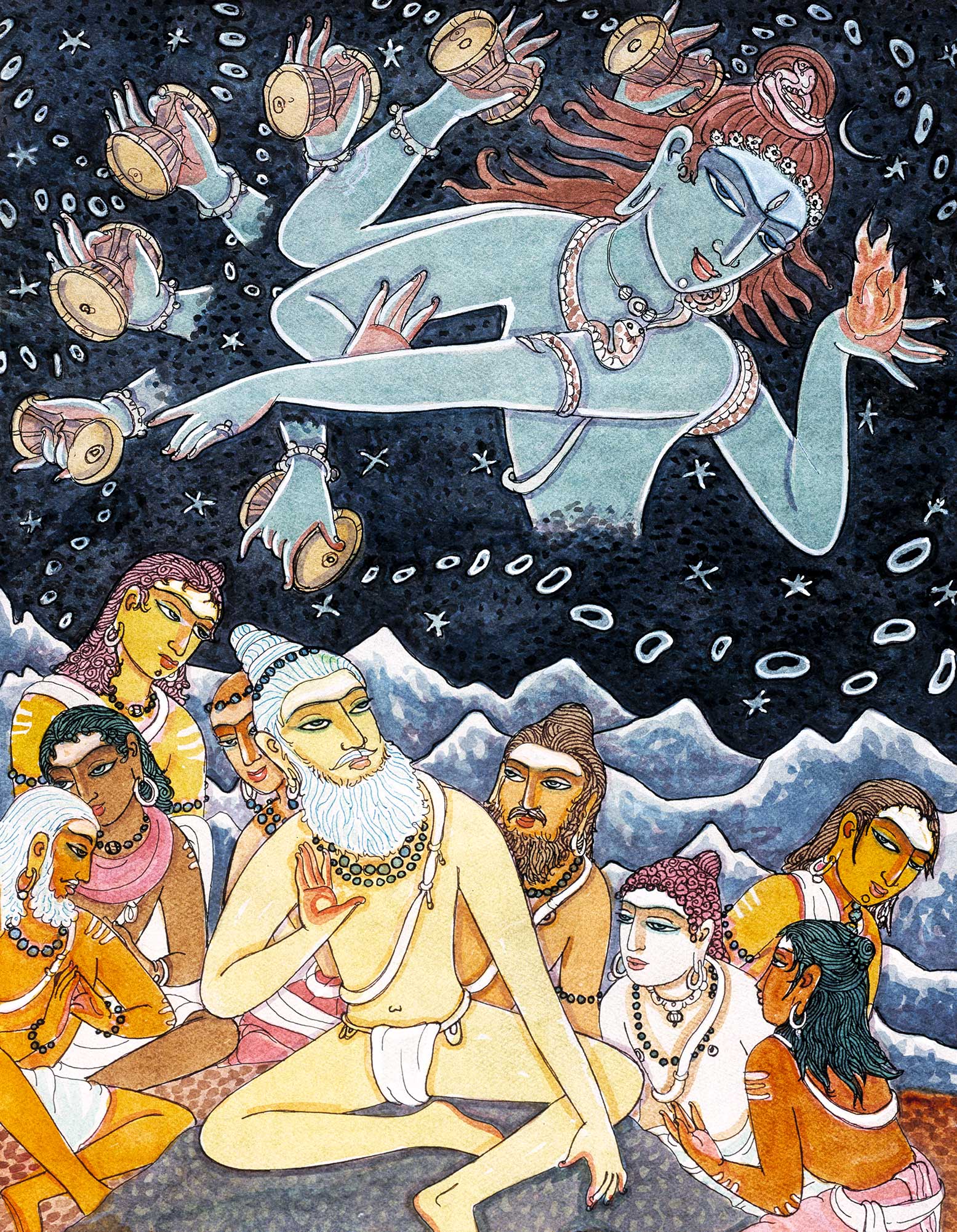 Compassionately willing to elevate the Siddhas such as Sanaka and others and to install them in the highest plane of consciousness related to the transcendental sound, Lord Nataraja, the absolute and unparalleled Lord of cosmic dance, sounded the drum (held in His raised right hand) fourteen times at the ending phase of the Dance. The transcendental sounds emanated from the drum assumed the form of fourteen aphorisms and came to be known as the Collection of Siva Sutras. Now I proceed to explain the core meaning of these fourteen sutras.

Here and in the context of all other aphorisms, the final letter is meant for making known the hidden meaning of the root word and for enabling Panini and other learned Sages to gain proficiency in the science of audible and inaudible sound as desired by them.

The Supreme Lord who is eternally free from the association of three qualities, having entered the cosmic flux known as maya through his Conscious Energy becomes all-pervasive, assumes the form of the worlds and governs them.

The letter a is the first and foremost of all the 51 alphabets; it is of self-luminous in nature. Because of its total identity with the Supreme Lord it shines forth as the Supreme Isvara Himself. Upon the union of the first letter a and the final letter ha (h), the word aham gets formed.

In the beginning all the sounds were of the nature of paravak only. And all these worlds born of para denoted by the notion ‘this’ (idam) were in the state of knowability alone, being in unmanifest form. From the state of para emerges pasyanti and subsequently comes out the state of madhyama.

The same sound reaching the visuddhi cakra and mouth assumes the form of vaikhari. The mere state in which the world existing in the state of knowability is about to manifest, is distinctly called madhyma vak’.

Being in the closest vicinity of the first letter a and being the seed for the emergence of the worlds and being the inner potency of all the letters, the letter i is to be considered as the basic source for all kinds of manifestation.

When the desire to create the world appeared within the heart of the Lord, then there appeared the seed letter i. The sages who have deeply studied and understood the core meaning of the Vedas declare that the letter i is significantly called kamabija.

The letter a is of the nature of cogitability alone, being the unmanifest. The letter i denotes citkala. Because of its pervasive nature, the letter u denotes Vishnu. That which is in the state of cogitability alone, having associated with citkala assumes a form for the sake of cosmic function, creates the worlds and enters into them by means of pervasive nature (Vishnu) and becomes cogitable as the Great Lord (Mahesvara).

Through His own energy known as Cit-Sakti and through His own Will, the Supreme Lord makes the entire range of worlds to unfold from the causal source known as maya. The knowers of the Scriptures realize that the letter r’ which denotes the Supreme Lord and the letter l’ which denotes Sakti are the specific letters belonging to the category of neuter.

The letters e, o and n indicate the unified state of maya and Isvara. This kind of unification is seen in all the existents. Since He is the witness-consciousness (sakshin) for all the manifested things, it is ascertained that the Supreme Lord is solely One only, having nothing apart from His own existence.

The letter ai, being the unified state of a and e, denotes the formless Supreme Lord who is of the nature of pure consciousness. The letter au, being the unified state of a and o, denotes the assumed form of the Supreme Lord, which shines forth as colored by Sakti. Willing to bring out and to expand the entire range of the universe, which is within His own Self, The formless Supreme Lord assumes a fitting form constituted of Sakti and presents Himself as the Great Yogi, as Sadasiva.

Out of the five gross elements knowable here, the four elements namely the space, air, water and fire get originated from the letters ha, ya, va and ra respectively as willed and activated by the Great Isvara. From all perspectives, it is to be known that the Absolute and Supreme Lord is Siva alone, the knower and the doer of all.

For all the embodied beings, the earth is the basic supportive element. It is the source for food, drinks and so forth. From food develops the seminal seed and from that the embodiment occurs for the individual soul. The earth is the basic source and support for all these. Because of such primary importance, it is exclusively said that from the letter la, evolves the earth.

As illumined and activated by the Supreme Lord, who is of the nature of pure consciousness and who presents Himself in the form of the entire range of the worlds and the worldly objects (virat purusha), speech and hand evolve from the letters jha and bha. The speech and hand could be seen in all the embodied beings. They cannot be seen in the immovables like trees, mountains and so forth.

For all the embodied beings, legs, anus and genital organ coming under the group of the organs of action, get evolved from those forth letters, gha, d’ha and dha which belong to the ka group, ta group and ta group respectively.

It has been declared that for all the embodied beings, the five organs of knowledge, namely, ear, skin, eye, nose and tongue get evolved from the five letters ja, ba, ga, d’a and da respectively.

Lord Siva is beyond all these tattvas whose evolution has been told so far. He is the Supreme One. He is the sole witness of all beings and their actions. He assumes a form fit enough to bestow His abounding grace on all beings. “I am the Self of all and I am one with the supreme letter ha”. Having imparted this final message, Lord Nataraja concealed Himself from the vision of the sages.