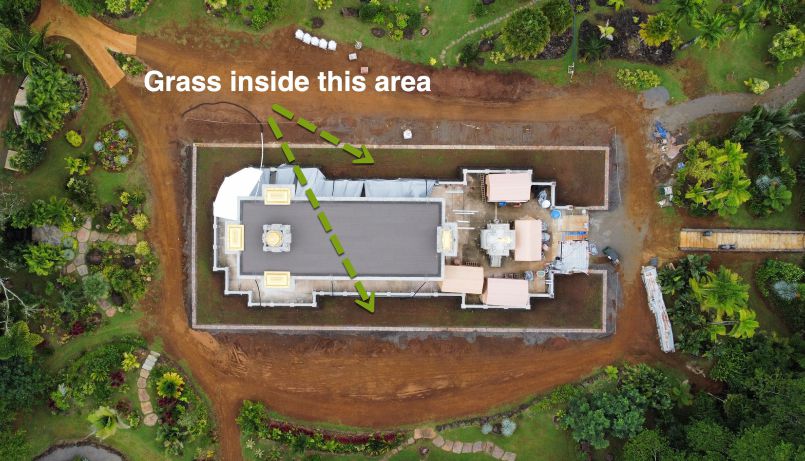 A team has been pushing hard to establish a perimeter of grass 8-12 feet wide next to Iraivan, right up to the lava rock plinth. Much preparation has happened, starting with a bulldozer sloping the land, installing a substrate support grid, filling with compost, seeding and more. After a couple of months, we are seeing the results, bright green grassy area on which future pilgrims will walk barefooted to read the 35 bronze plates on the perimeter wall. Just this morning Tandu Sivanathan covered the entire area with a special fertilizer designed to encourage root growth (high in potassium). See the slideshow for progress. 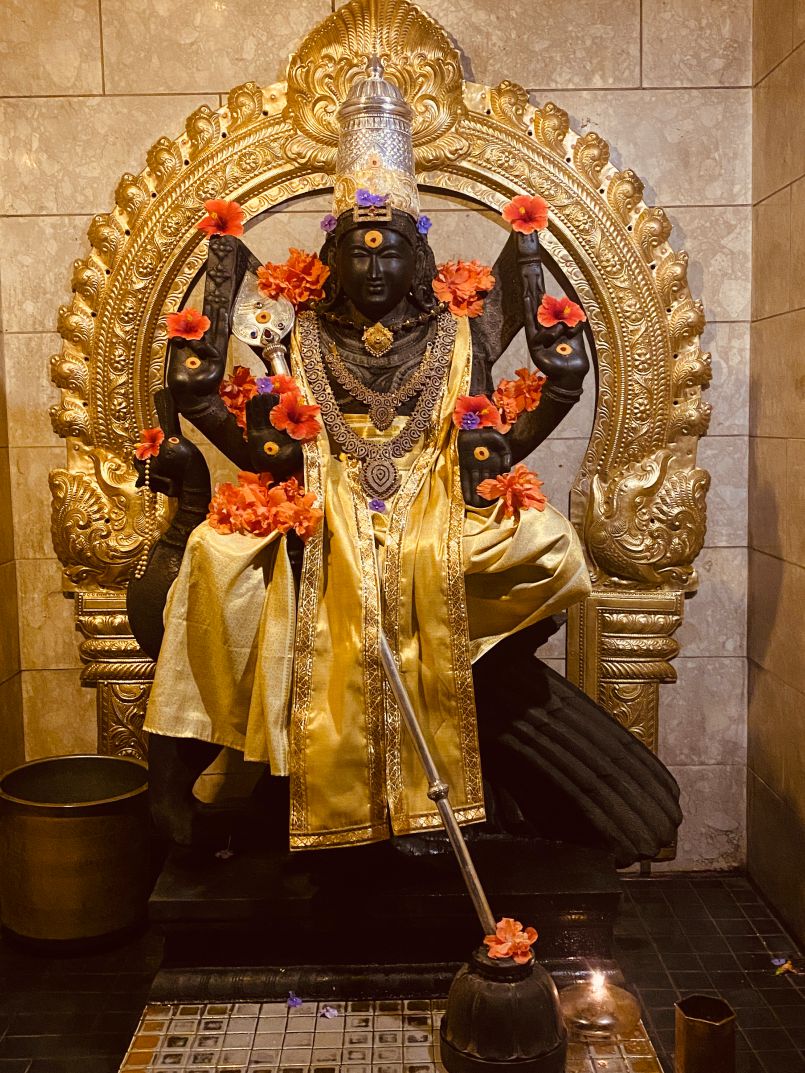 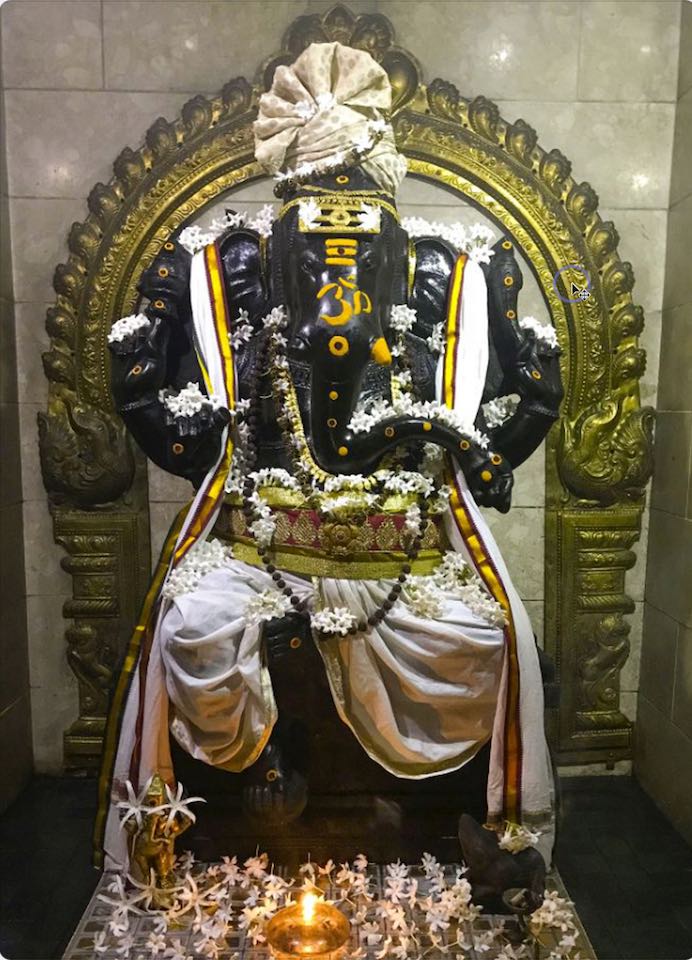 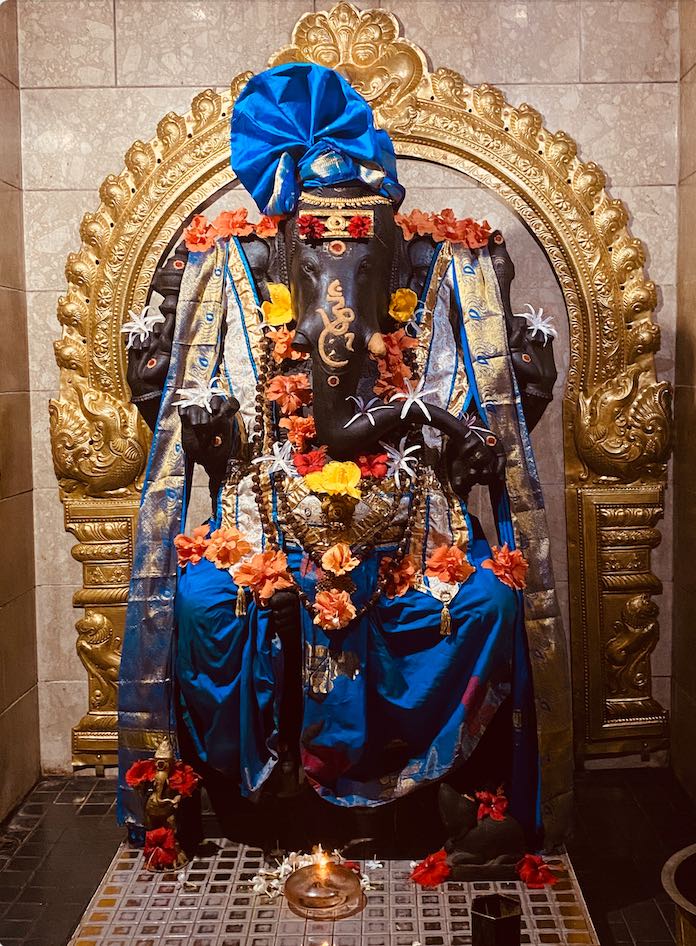 The ancient Silpashastras describe the archway that is one of the ornaments of the Deity in a temple or shrine. It is called Tiruvasi, and it represents the Cosmic Sphere in which Siva dances or another deity abides. The flames are consciousness and the fierce face at the top is Mahakala, Lord of Time who ultimately devours all.

The two tiruvasis in Kadavul were made many years back under the supervision of Jiva Rajasankara. Since he is on pilgrimage here, he undertook the refurbishing of the hammered metal arches, which had become a bit worn and weary, as this do over time. It took several days and they were reinstalled last night. See the slideshow for the short story. 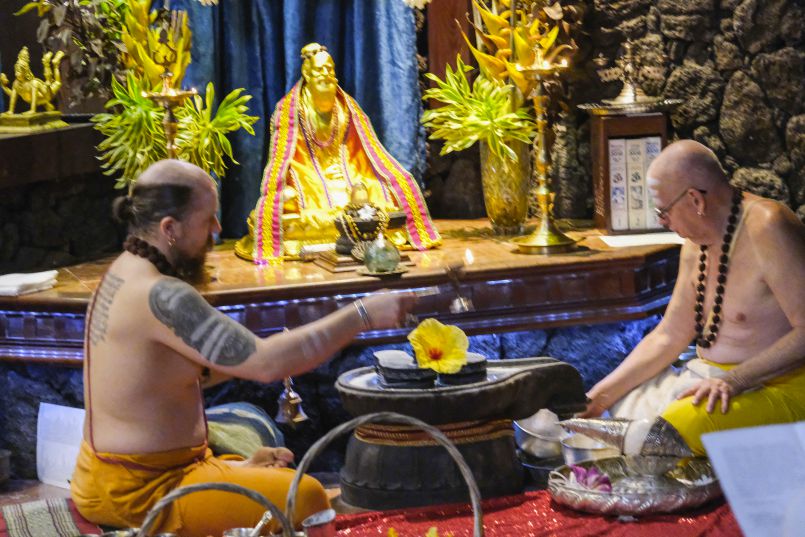 This morning our monks and local shishya celebrated the Chitra nakshatra with their monthly observance in Kadavul Temple. Sannyasin Tillainathaswami and Yogi Haranandinatha performed an abhiskekam at Gurudeva's shrine, while other monks chanted Sri Rudram. Aum

"It is not a matter of becoming the Self, but of realizing that you never were not the Self. And what is that Self? It is Parasiva. It is God. It is That which is beyond the mind, beyond thought, feeling and emotion, beyond time, form and space." - Gurudeva 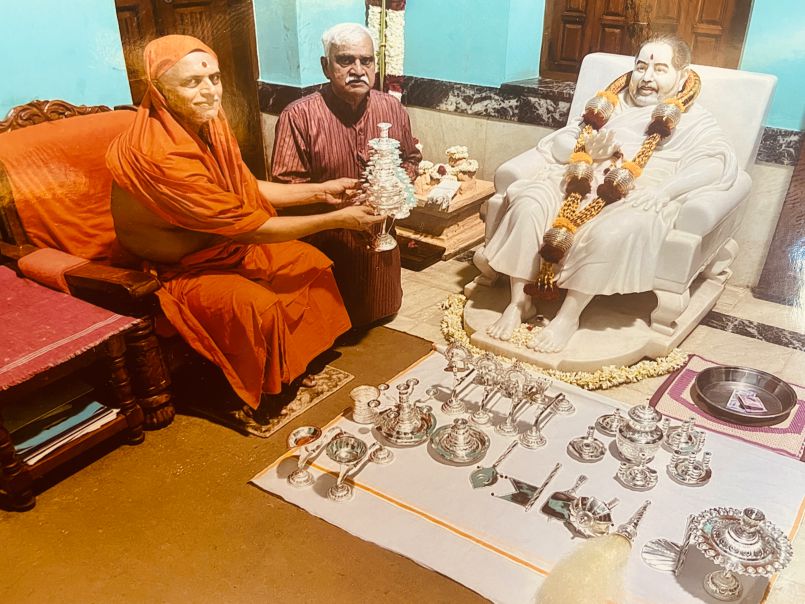 When Jiva Rajasankara and the three silpis arrived from Bengaluru a few days back, they had many boxes of items for the monastery. One held these amazing silver puja items, given by Swami Jeyendrapuriswami, shown below with Jiva holding an alankara lamp. Swami knew Iraivan would need these when the temple opens and commissioned them made by one of South India's finest silver smiths. Such a precious gift to Siva. Nandri, Swami. They will serve us for many years into the future. 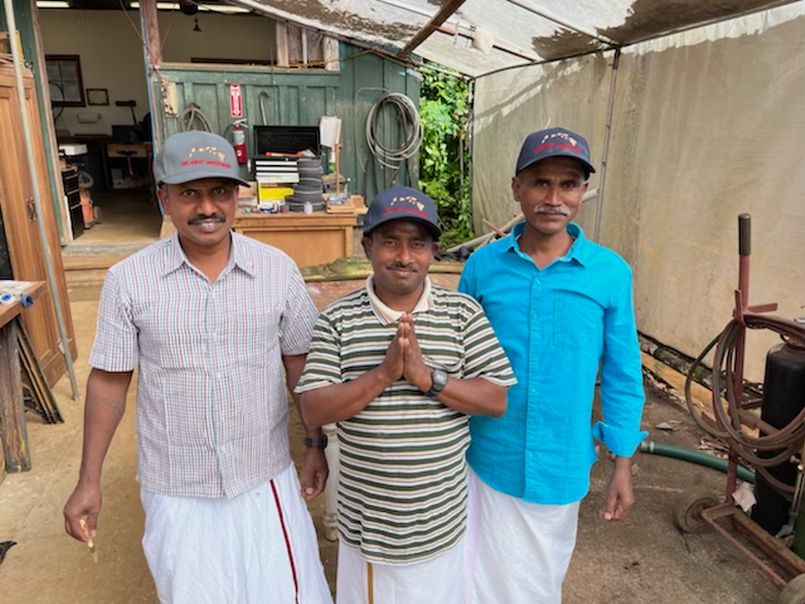 Aloha all! We are very excited to announce that after an absence of years the Silpis have recently arrived back from India and have begun to work on Iraivan Temple and the Nandi Mandapam in front of Kadavul Temple. Enjoy the photos of progress and look forward to more 🙂
Aum Namah Śivaya 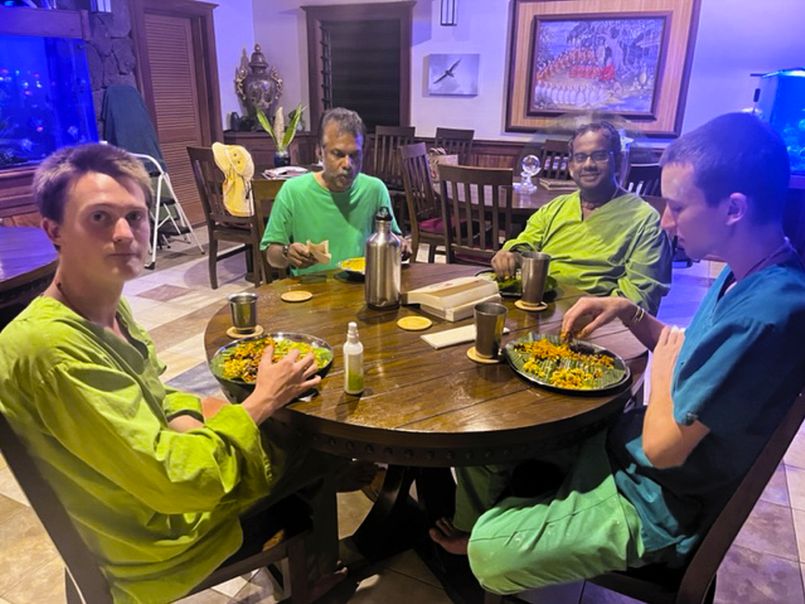 Recently our inspired team of taskforcers got together to cook a wonderful and tasty meal for all the monks and Satguru. Encouraged by their fearless culinary-leader, Vatshalan, the group embarked on a quest to create a banquet of traditional Sri Lankan dishes including idiyappam, coconut and tofu curries, onion sambar, coconut chutney and carrot sambal. The meal was served on traditional banana leaves and deeply enjoyed by all! 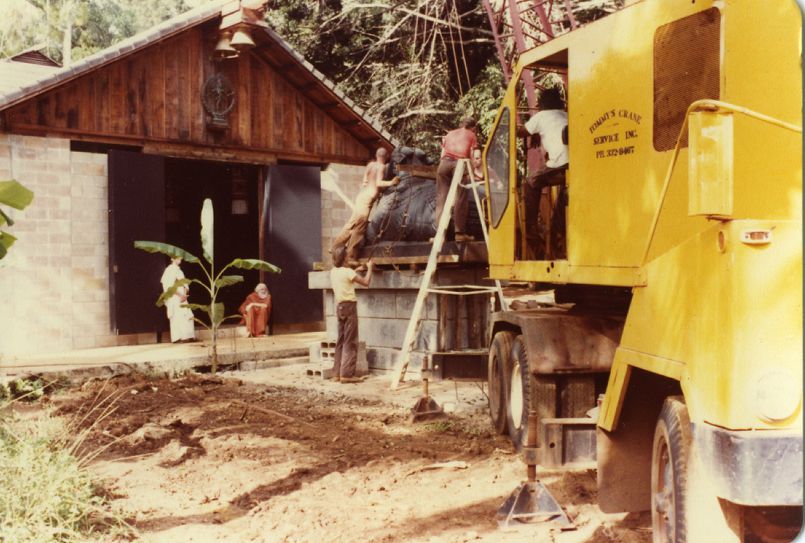 This rare photo from 1980 shows Gurudeva seated on the Kadavul threshold watching the young monks guide a giant crane that is lifting and putting into place the 32,000-pound granite Nandi. It was so heavy, it bent the crane! That night on the evening news from Honolulu (remember TV news before the Internet?) the opening story from Kauai was captioned "16 Tons of Bull!"

When Nandi was in place, Gurudeva lamented that the black granite murti was magnificent, but the base on which he kneeled "is a pile of rocks." He was not happy with the roughness of the stones. So here we are, 42 years later, bringing the base up to Gurudeva's hoped-for standard.

This morning the three silpis and Jiva, newly arrived from India, are uncrating sculpted granite cladding that has been in the Bengaluru workshop for some three years. In the days ahead they will be assembling these stones in front of Kadavul and we will visualize Gurudeva seated on the threshold smiling that his words were still ringing in our ears and his Nandi will have a proper throne as he kneels before Siva Nataraja.