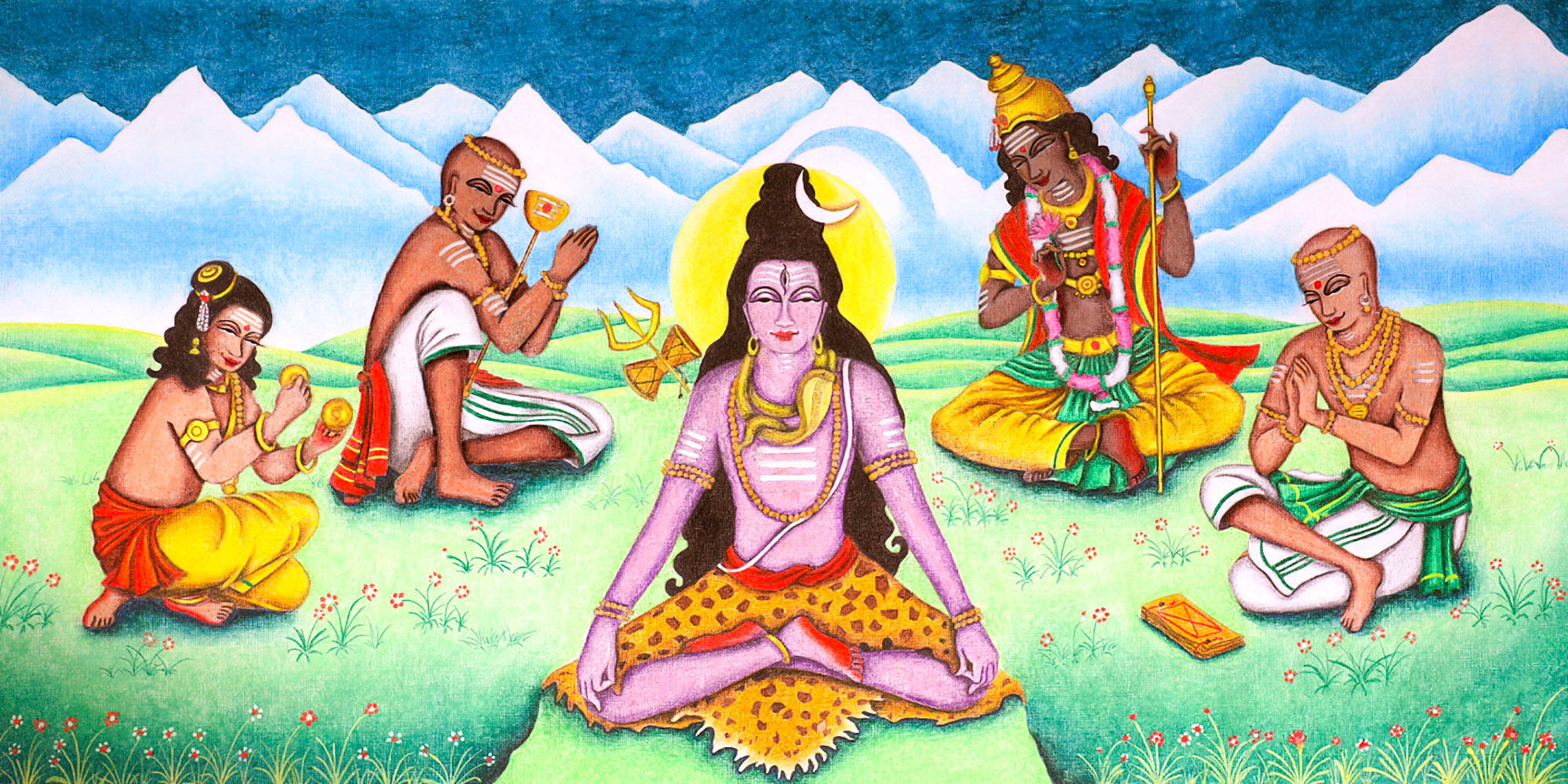 During the 6th through 9th centuries, South India was home to 63 fervent devotees of Lord Siva who became known as the Nayanars (or Nayanars). Several among these pious souls, coming from all segments of society—potter, fisherman, farmer, merchant, priest, hunter, washerman—composed devotional hymns that are sung to this day by devotees worldwide. A festival dedicated to the 63 Nayanmars, the Arupathu Moovar Thiruvila, is held annually at Kapaleeswarar Temple in Chennai, Tamil Nadu.

Three of the most prominent Nayanars—Appar, Sambandar and Sundarar (composers of Thevaram hymns)—along with Manikkavasagar are called the Samayacharyas (teachers of the faith) referred to in Tamil as Nalvar, “The Four.” They promoted Saiva Siddhanta philosophy and culture, countering the incursion of Jainism and Buddhism. They taught that Siva is Love and that love (for all beings—indeed, for all existence) is the key to reaching Siva, the Supreme Being.

Thirugnana Sambandar was born to a pious Brahmin couple in Sirkali in the 7th century after the father had prayed to Lord Siva for a worthy son who would reestablish the glory of Saivism. When he was three, his parents took him to Sattainathar Siva Temple and told him to wait near the pond. Soon the child started crying, and Goddess Parvati, along with Lord Siva as Thoniappar, came to console and nurse him. When the parents returned, they saw milk on his mouth and asked who had fed him. Sambandar pointed heavenward, spontaneously singing his first hymn about Siva, “Thodudaiya Seviyan.” The milk is regarded as Sivajnanam, milk of divine wisdom or knowledge of Siva, and the child became known as Thirugnana Sambandar (the saint related to God by knowledge), and as Aludaiya Pillayar (the Lord’s child).

Sambandar is glorified in the Periyapuranam as Tala Vendan, the unparalleled king of rhythm. The prodigy starting singing about the Vedas at age seven, eventually composing a body of hymns that comprise volumes 1-3 of the Thirumurai, the 12-volume compendium of hymns and writings by South Indian Saivite saints. In his short life Sambandar bested Jain monks in debate and brought the hunchbacked king Koon Pandyan (later Sundara Pandyan) back into the Saivite tradition.

When a wedding was arranged for him at age 16, Sambandar sang to Siva seeking liberation. Legend tells us that there appeared a great blaze of light—Siva Jyoti, the light of Siva. Then, as Sambandar composed the “Panchakshara Padigam,” everyone present attained union with Lord Siva, the source and final destination of all.

The 7th-century poet-saint Thirunavukkarasar pilgrimaged on foot to at least 125 Tamil Nadu temples, humbly sweeping the temple paths, worshiping and composing hymns praising Siva. When he met child-saint Sambandar, he prostrated at the boy’s feet. Sambandar reciprocated and respectfully addressed him as Appar (father), the name by which he is commonly known.

Born as Maruneekkiyar in a Vellalar family of Saivites in Tiruvamur village, the saint lost his parents as a child and was mothered by his sister Tilakavathiyar. The transience of life stimulated in him a yearning for everlasting truth. He joined a Jain monastery, and his sister prayed to Siva to bring him back to Saivism. The boy fell severely ill and returned home. Brother and sister prayed at Thiruvadigai Temple, and Maruneekkiyar was cured. Becoming a fervent Siva devotee, he composed many Siva hymns (Thirumurai volumes 4-6) and was named Thirunavukkarasar, “king of divine speech.” At 81, Appar attained mukti at Agnipureeswarar Siva Temple in Thirupugalur.

Sundaramurti Nayanar, uniquely, was born to parents who are also Nayanars, around 800ce. His hymns comprise the seventh Thirumurai volume. When he was about to get married, an old ascetic covered in sacred ash and rudraksha beads interrupted the wedding, claiming that Sundarar was his slave, citing a palm-leaf manuscript. Sundarar called him a pitthan (lunatic). But the palm leaf proved valid, and Sundarar followed the man to the Thiruvennainallur Siva temple, where the ascetic disappeared into the sanctum. Lord Siva asked Sundarar to compose a hymn with the word pitthan per his initial address. Sundarar sang this first hymn, “Pittha pirai choodi” (O crazy one wearing the crescent moon), venerating the Lord at Tiru Arul Turai Temple (today’s Kripapureeswarar Perumal Temple), one of 82 Siva temples he visited in his life. Sundarar lived only 18 years but became one of the foremost saints of Tamil Saiva poetry.

Manikkavasagar was born as Vadavurar in a Saivite priest family in 9th-century Thiruvadavur, near Madurai, and rose to become prime minister to the Pandyan king. According to later accounts, one day the king gave him a large sum of money to purchase war horses. On the way, the minister was drawn to an ascetic (who was in fact Lord Siva) sitting with disciples under a tree. Vadavurar, taking the sage as his guru, sat at his feet in meditation and received enlightenment. Totally forgetting the king’s assignment, he renounced the world and used the royal funds to build the Athmanathaswami Temple (Avudaiyarkoil).

The hymns of Manikkavasagar (“he of ruby-like utterances”), comprising Thirumurai volume 8, express his aspirations, trials and yogic realizations, praise the Namasivaya mantra, and stress cultivating love for Siva. The king, too, was blessed by Lord Siva and gave up his throne to pursue spiritual life. Sculptures illustrating the poet-saint’s life can be found in the Madurai Meenakshi Sundaresvara Temple and in the Chidambaram Nataraja Temple, where he spent his final days.