The spiritual leader of Kauai Aadheenam is Satguru Bodhinatha Veylanswami. He has been the monastery's head since the founder, Satguru Sivaya Subramuniyaswami, attained mahasamadhi, his great departure, in 2001. Subramuniyaswami, known affectionately as Gurudeva, designated Bodhinatha, a disciple for 37 years, as his successor. 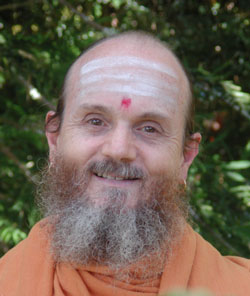 Most of the year finds him on the island of Kauai, where he oversees the varied publications of Himalayan Academy and serves as publisher of the international magazine Hinduism Today. At the 382-acre monastery-temple complex, he trains the younger monks in their service duties and spiritual practices, and guides the lives of hundreds of families around the globe. Following in Gurudeva's footsteps, he works informally with Kauai leaders to perpetuate the island's aloha spirit of love and friendliness and to help the community achieve greater sustainability.

Bodhinatha is immersed in a series of educational projects and international seminars that focus on bringing religious instruction to Hindu youth, and on pamphlets and books that present Gurudeva's teachings in thoughtful, step-by-step style. A recent project produced the first two books of the series Hindu Children's Modern Stories. Volume One, Ten Tales About Self-Control, and Volume Two, Ten Tales About Religious Life, are based on the yamas and niyamas, Hinduism's ethical restraints and religious observances.

Bodhinatha travels intensely, teaching Hinduism and consecrating major Hindu temples around the world. He has personally blessed the openings of temples in North America, Australia and India. Communities across the United States, Canada, the Caribbean, South Asia and elsewhere have brought him to speak to their devotees. Every few years he conducts Innersearch Travel-Study Programs, taking pilgrims to India, Australia, New Zealand, Malaysia, Cambodia and, most recently, to the Hindu-majority island of Mauritius in 2015.

In 2011 he was honored by the Sivacharyas of India for overseeing a three-year project that digitized over a million inscribed palm leaves to preserve and share with the world ten thousand deteriorating manuscripts, including Saiva Agamas and other important scriptures. Additionally, he guides the financial and administrative staff of four major nonprofit organizations, including the eighteen-million-dollar Hindu Heritage Endowment, for which he was the principal architect under Gurudeva's guidance.

Born in Berkeley, California, on October 15, 1942, Bodhinatha began studying Vedanta and meditation in 1960, soon developing a deep interest in monastic life. He met Gurudeva at the Mountain Desert Monastery in September of 1964 in Virginia City, Nevada, while still in school. At this first meeting he stated his desire to realize God. Gurudeva brought him close quickly by having him stay in the San Francisco monastery on weekends. When school was completed in June, 1965, Bodhinatha moved full time into the monastery and took his sadhaka vows a few months later in August at age 22.

Bodhinatha managed Gurudeva's Master Course Correspondence Study from the Nevada monastery in the late 60s, guiding hundreds of students in their initial explorations of yoga, meditation, mysticism and Hindu metaphysics. He was in the initial group of four monks who moved with Gurudeva to Kauai to establish Kauai Aadheenam in February, 1970. Later that year, Gurudeva took him to Sri Lanka and introduced him to the Jaffna Saivite culture and worship. He worked closely with Gurudeva from 1970 to the present as Vice President of Gurudeva's several nonprofit corporations and one of the stewards guiding the life of the monks, their activities, publications and projects, responsible directly for all financial, legal and administrative matters.

In March, 1972, he received sannyas diksha in a powerful ceremony at which a number of monastics were initiated by Gurudeva at his Sri Subramuniya Ashram in Alaveddy, Sri Lanka. He received from Gurudeva the name Veylanswami a few weeks later at the Murugan Temple in Palani Hills. After helping Gurudeva take 72 pilgrims on the round-the-world 1972 India Odyssey Innersearch to many temples and ashrams in India and other nations, he was sent by Gurudeva to live, meditate and do special sadhanas for six months at the Sri Subramuniya Ashram in Alaveddy. He stayed six months at the Sri Subramuniya Ashram again in 1974. During this period, totaling one year in the homeland of the Kailasa Parampara's tradition, he was able to visit many times for worship and meditation Paramaguru Yogaswami's hut in Columbuthurai, the Sivathondan Nilayam on KKS Road, the famous Nallur Murugan Temple, the Kumbalavalai Pillaiyar Temple, Katirgamam in the South, as well as numerous other places of worship. Though Yogaswami passed in 1964, his shishya Markanduswami was still living, and Bodhinatha was able to spend time with this remarkable direct disciple on a number of occasions.

In preparation for beginning his first teaching mission, he was directed by Gurudeva to spend nine months living in complete solitude as a hermit in a thatched hut on a small oceanfront parcel on the Kona Coast of Hawaii where he performed intense daily worship and meditation during most of 1977. Later, in 1982, he began to serve in a senior administrative capacity at Kauai Aadheenam, also accompanying Gurudeva on lecture tours to Mauritius, Malaysia and Singapore. In 1988, Bodhinatha spent six months on pilgrimage in India, spending time worshiping and meditating at ashrams and temples from as far north as Rishikesh to Tiruchendur in the South. Upon returning to Kauai, he received acharya diksha from Gurudeva, becoming the first acharya of Gurudeva's Order.

From 1993 onwards Gurudeva entrusted to Bodhinatha the formation and development of the Hindu Heritage Endowment, which will support Hinduism and the church far into the future.

In 1995 a new version of the Church's manual, called the Saiva Dharma Shastras, was published in which, for the first time, Gurudeva named his successors. Three were designated, with Bodhinatha being the first, followed by Palaniswami and then Ceyonswami.

Gurudeva was on retreat for three years from 1997 to 1999, absorbed in completing his legacy work, the Master Course trilogy. During those years, he vowed not to leave the island of Kauai. Therefore, Gurudeva asked Bodhinatha to represent him and to travel more frequently to the USA, India, Malaysia, Singapore and Mauritius to visit members, students and devotees. He met them in small and large groups, giving private and public talks and holding satsangs. Activities during these years included taking members and younger monks on pilgrimage to major temples in Tamil Nadu, visiting ashrams in Karnataka and spending time at our Bangalore carving site for the Iraivan Temple. In 1997 Gurudeva initiated Bodhinatha as Paramacharya, which empowered him to give the first Saivite initiation of Samaya Diksha, also known as Mantra Diksha, and gave him the name Bodhinatha, which means "lord of wisdom" or "chief among the awakened ones." During his 1997 travels, he gave Samaya Diksha to members in Mauritius, Malaysia, Singapore and India.

In 1999-2001 Gurudeva was again traveling on month-long programs, such as the Innersearch Travel Study Programs to Alaska, the Caribbean and Northern Europe, and to the United Nations Millennium Summit of Religious and Spiritual Leaders. He was again away from his normal duties at the Aadheenam during his three month recovery from a hiking injury suffered on December 5, 2000. Bodhinatha was the senior monk in charge in Gurudeva's absence, responsible for conducting the monks' morning meditations, giving talks to the monks as well as presenting the semiweekly discourses in Kadavul Hindu Temple for devotees.

On October 21, 2001, the tenth evening of Gurudeva's 32-day prayopavesha fast, Gurudeva asked Bodhinatha to come to his bedside which all the monks had gathered around. He sent for his aadheenakartar pendant, the symbol of the spiritual head of Kauai Aadheenam, then placed it lovingly on Bodhinatha's neck. He took his beautiful golden Namasivaya bracelet and softly clasped it on Bodhinatha's wrist. It was a gracious moment, and no one in the room missed its importance. Gurudeva then removed one of his rings and placed it on his successor's finger stating that his name would be Satguru Bodhinatha Veylanswami, then declaring, "You are the guru now."