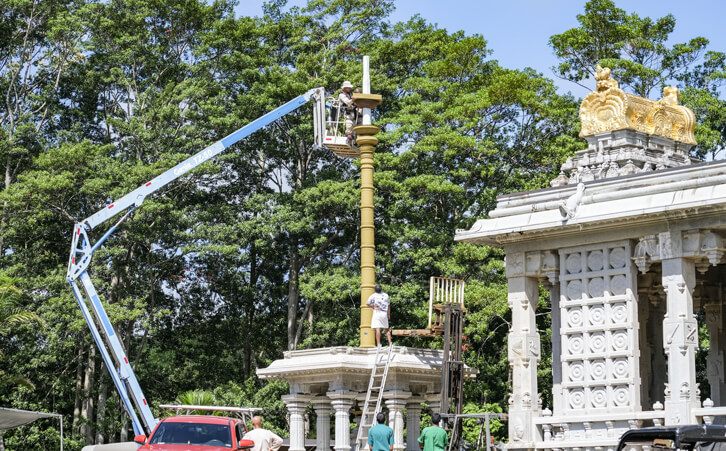 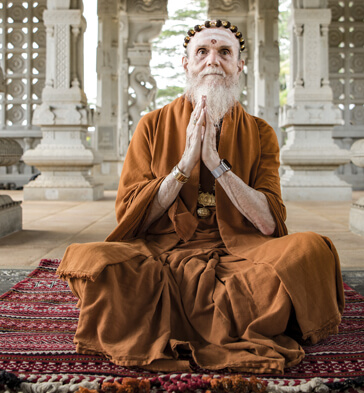 Having been here for the entire year, our team of seven silpis has been able to make great progress on Iraivan Temple. Pilgrims visiting in recent months were definitely inspired to personally view the high-caliber work the craftsmen are executing. More and more temple builders are coming to Kauai on a pilgrimage and spending a few days worshiping, meditating and performing other sadhanas, especially attending the popular, and powerful, monthly Ardra nakshatra abhishekam for Lord Nataraja in Kadavul Temple.

As in previous years, work on three major “extra” projects—the bronzes of the Temple Builders’ Pavilion, landscaping around the temple and the 13-foot-tall bronze Hanuman—is being funded separately by donors who are inspired to support those specific creations. A small portion of our Iraivan Temple Fund will be used to cover the cost of the initial planting of the newly landscaped areas around Iraivan Temple and the San Marga entrance area.

We end with an inspiring quote from the monastery’s Iraivan Temple affirmation: “We see Iraivan as Gurudeva’s legacy to the world, a fulfillment of parampara, scripture and temple: the three pillars of Saivism. Gurudeva declared it journey’s end for those seeking Siva’s darshan, a place where you do not have to invoke God, for God is here, for this is where heaven meets the Earth.” With infinite blessings to each of you for a bountiful family life and spiritual progress.

Satguru Sivaya, Subramuniyaswami (1927-2001), founder of the temple, stands with the extinct volcanic mountain, Waialeale, in the background.

Located in the heart of a traditional Hindu monastery complex reminiscent of ancient mathas and aadheenams of India, Iraivan is more than a temple; it is a pilgrimage destination, a place of sadhana and spiritual rejuvenation. Iraivan Temple is a living edifice that brings ancient tradition into the 21st century, a stable anchor sustaining and strengthening Hindu dharma for our children, their children and generations to come. In 2001, Gurudeva said: “When you begin the pilgrimage to Iraivan Temple, you drop off and dissolve the karmas of the past. Then, because of the direction the temple is facing, the temple gives a new start, a new impetus for a wonderful future. It is a boon-giving temple, a gift-giving temple, a life-giving temple, a wish-fulfilling temple.” 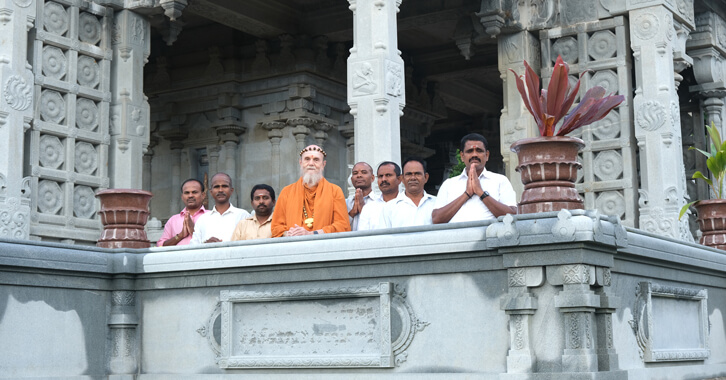 Satguru Bodhinatha Veylanswami with the silpis on Kauai.

Startling may be best way to describe the myriad changes in Iraivan Temple over the last year. We’ve all been told that each element of the temple has a specific function in channeling the power of the inner worlds, but until you experience those elements being set in place one by one, the enhancement is impossible to appreciate. 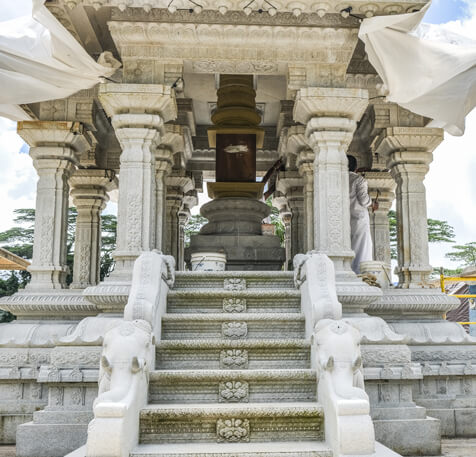 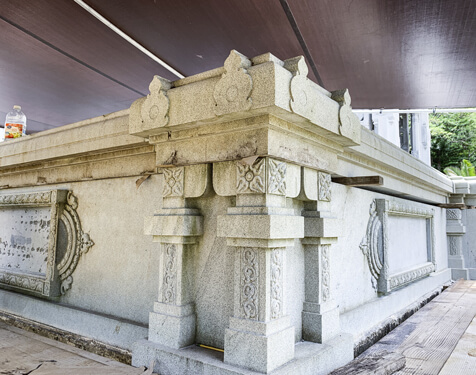 The perimeter wall has been a major accomplishment this year.

The nearly completed Nandi Mandapam and Kodimaram have dramatically changed the shakti of the temple, as has the placement of the first course of the perimeter wall; and most profoundly the 11,000-pound metal avudaiyar base for the crystal Sivalingam, which was muscled into the innermost sanctum by the silpis and several strong members and monks in November of 2018. The latter event allowed us to finally complete the hand railing around the temple, again increasing the potency—and all this without daily pujas. One can only imagine the increase in power after the kumbhabhishekam! 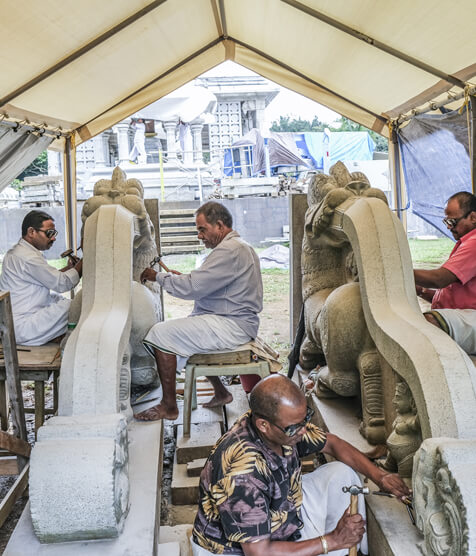 Four silpis work patiently on the two massive yalli handrails that will frame the entry. 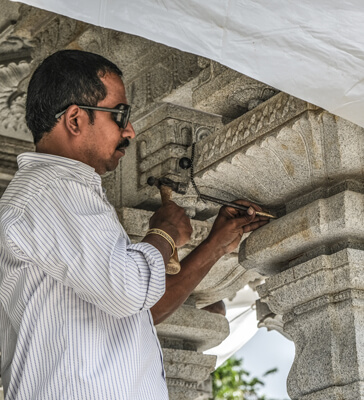 A silpi adds refinements to a mandapam pillar.

Less noticeable details recently completed include the upper wall ornamentation of the Mukha Mandapam (the chamber outside the innermost sanctum) and setting of the inner sanctum floor stones. The silpis are currently working to complete the giant yalli stones that flank the wide main entrance steps. Those steps and the second course of the perimeter wall are their main focus now. 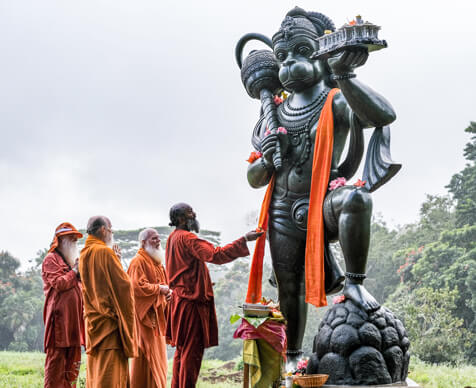 Hanuman (below) is installed on His mound near the Rudraksha Forest; the Shadkonam desert garden from high above

Hanuman Installed at the New Visitor Center
Outside the temple, the most spectacular addition is the 13-foot bronze Hanuman statue now standing near the Rudraksha Forest at the entrance to San Marga. It will be the showpiece of the future Visitors’ Center. As you may know from our TAKA reports, the original stone Hanuman statue broke at weak points after lying several years at the monastery waiting to be installed. Bronze artisan Holly Young spent months making molds from the stone murti and re­creating an even greater masterpiece in bronze. The patina makes the metal look exactly like green jade. 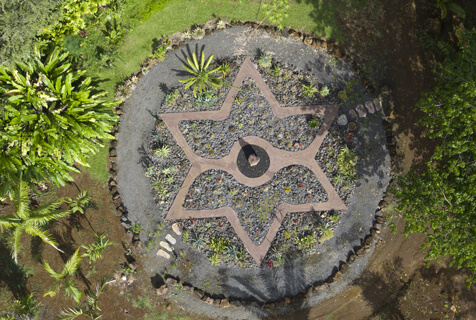 Shadkonam Arid Garden
Landscaping work in Siva’s sacred gardens continues apace. Clearing was done and plans are being drawn up for the future Visitors’ Center gardens parking area. Essential facilities must be in place before the temple building permit can be closed and the kumbhabhishekam can be held. Clearing has also been done along the Path of the Saivite Gurus, in part because earlier plantings, especially of bamboo, had expanded beyond their intended areas. Next to the temple, the 60-foot-wide Shadkonam (six-pointed star) arid garden is nearing completion. Yes, we’ve discovered that hundreds of desert plants are quite happy with our 80-120 inches of rain a year. Hence, we’ve imported many species from around the world to create an unusual expression of landscaping art in the tropics. 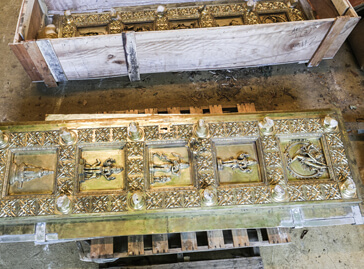 The two sanctum doors, made of teak and clad in bronze, arrived on Kauai island.

Temple Doors Arrive
In other happy news, the two exquisite temple sanctum doors with ten forms of Siva have arrived. They are being kept crated for now, to be installed once they have been gold-leafed and everything else is close to completion. 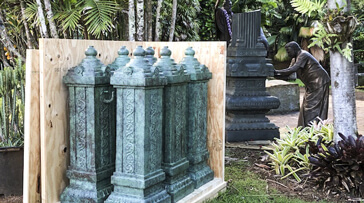 An aerial photo of Iraivan amid the newly developed sacred gardens.

As we move toward completion, important tasks remain before Kumbhabhishekam. Among them are the installation of the copper covering of the kodimaram, installation of the main entry steps and the second course of the perimeter wall. Five major parts that don’t require the silpis will also move forward: installation of the second prakaram red granite floor, the foundation’s 4-foot-tall lava rock facing, the 37 bronze perimeter panels, a copper roof for the Nandi Mandapam, and gold-leafing. We will also repair leaking joints in the temple roof sun shades, and remove calcite deposits caused by those leaks. A small Chola-style Ganesha shrine will be installed near the beginning of San Marga. Landscaping will continue, with recent plantings having filled in, creating new garden settings. And planning will proceed for the Visitors’ Center, with bathrooms and parking areas needing to be completed before the consecration.

LET’S WORK TOGETHER TO COMPLETE IRAIVAN 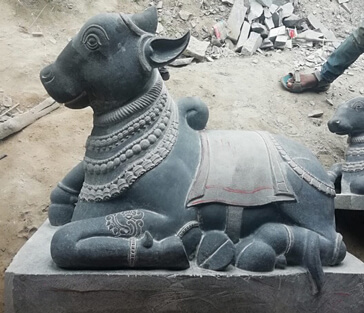 With the main edifice nearing completion, Iraivan Temple needs your support now more than ever. Be generous and send your special year-end contribution today.