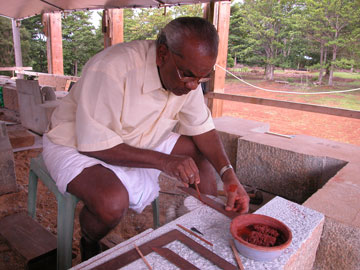 Shanmuga Sthapati is one of India's great builders. While Ganapati Sthapati designs temples, Shanmuga Sthapati supervises their construction. He is famous for his work on erecting the 133-foot tall stone image of Tiruvalluvar, Kanya Kumari, India. He is now the lead architect on site for the construction of the Iraivan temple. We are honored and fortunate to have such a great soul building this historic monument. In this photo, he is carefully marking a piece of stone to be carved out by the team of artisans that are working here under his supervision in Hawaii. During our 2002 Guru Purnima celebrations, Sthapati gave the following wonderful speech in Tamil, which we have translated here below into English. about the Iraivan temple.

Aloha! I begin my speech with this sacred word. Gurudeva, Srila Sri Bodhinatha Veylanswami, Srila Sri Palaniswami, Ceyonswami and all Swamis of the Kauai Aadheenam, and all those who have gathered here today, to you I express my humble greetings. I hold my Guru, 'Vasthu Vignani' Dr. Ganapathi Sthapati in my mind and on his behalf, share our thoughts with you all today, the concluding day of this year's Guru Purnima celebrations.

This ancient land of Hawaii, rich in tradition and culture, is the same as Kailash, in a way. There appears to me a divine connection between the Saivite land of Siva's abode, Kailash and Kauai, Hawaii. I sense that this Garden Island is special in the whole of America.

Amidst natural surroundings such as in Kailash, a symbol of Saivism is being built - the Iraivan Temple. Our Gurudeva and Ganapathi Sthapati have, in the past, spoken a great deal on the philosophy and significance of a temple such as this. It is not quite possible for anyone else to say much more on the subject. We can but, repeat over and over, all that our Gurudeva has already said, which in itself, brings us great satisfaction and joy.

From somewhere near the city of Bangalore in the State of Karnataka in far-away India, come the white stones for this temple. The craftsmanship and artistry come from the stone-carvers of Tamil Nadu. Transported across the seas are the stones and the stone carvers, here to this distant Western land to be built into a beautiful temple of such grandeur and meaning. Such a task would be possible only by a seer and sage such as our Gurudeva, no one else. Only that kind of shakti could achieve something such as this.

The inner sanctum is in faithful Chola tradition, with beautiful pillars holding the outer mandapams, four magnificent entrances, garuda, and the vimanam at 41 ft from the ground, musical pillars, a mandapam for Nandi, kodi maram, along with the stone steps leading down to the river - all this besides the most significant deity in the sanctum sanctorum. Siva in the form of the natural formed crystal sphatika lingam. Even a thousand years will not change the color or form of this indestructible Temple for Iraivan. This will be evidence enough to the world, of the natural connection between Kauai and Kailash. Being home to America's first all-stone temple will be a cultural treasure for Hawaii. In this, there is no doubt.

Our Gurudeva, Sivaya Subramuniyaswami, was created by God for just this purpose - holding this wonderful temple as a symbol of Hinduism, to explain the methods of worship and to spread the message of Hinduism to the Western world. Let not anyone here think that their work is done once this Temple is completed. There is one fundamental fact that we should not forget. Hinduism has had many teachers in the past. Our Gurudeva was prepared for this life in his previous births when he nurtured Hinduism and its rich temple art and culture. This should never be forgotten. Born as a Chola king, he built magnificent temples and established the Chola-style of temple architecture. Many a temple stands testimony to this. The Brigadeeshwarar Temple at Tanjavur, the temples at Gangaikondacholapuram, Tarasuram, Patteeswaram, Thiruvalanchuzhi, Thirukadaiyur, Thiruvarur are but a few of the temples that he gave to this world. From the merit accrued from such a birth, he came as Sivaya Subramuniyaswami in this life to bring the Western world to the path of Hinduism, and to live a blissful life following its edicts.

In Indian astrology, there is a verse which is chanted when reading a horoscope.

This means, all the happiness, blessings, comforts that we are to get in this life is decided by the time of birth. All the achievements in profession, business, skills is decided on the basis of the family. All the name, fame and position is determined by the merit earned in past lives.

All this is written at the moment of birth itself. In accordance with this, our Gurudeva was born as a Chola king in South India, completed all that was required of him over there, and then as a result of the good he did in that birth was born here to spread the message of Hinduism for the benefit of the people in this land.

Keeping this in mind, it is clearly seen that our task does not end with the building of this temple. Temples were not built by kings of yore just for the worship of God or the fine workmanship of the sculptors and architects. The temples served the people as places of worship, centers for scriptural and Vedic learning, schools of Bharatanatyam dance and music, besides serving occasionally, as courts of law in the jurisdiction of God. In short, the temple served much as a University does today. We cannot forget the practice of people visiting temples to worship God as well as to acquire skills for the material world. It was to suit such diverse needs that the temple had several courtyards. Even medicine was taught alongside basic schooling. As needs grew, there were separate colleges for medicine, sculpture, music, natural sciences under the umbrella of a university.

What we need to keep in mind is this expanded role that the temple played in people's lives. Gurudeva was well aware of this, by virtue of his birth as a king and then as a rishi and all-seeing jnani. We ought not to narrow down the role of the temple as a place of worship alone. With the support of those who have gone to India to learn dances such as Bharatanatyam and arts such as sculpting, there should be a second courtyard for this Temple with small areas for learning dance, musical instruments like nadaswaram, scriptures, Vedas, painting and sculpting. Work on this could start after the Kumbhabhishekam of the Iraivan Temple, creating the environment that everything can be learnt here. For a thousand years will stand the Temple and the Aadheenam, breathing new life into the dying Hawaiian culture. It is only by steadily working towards identifying and executing the right projects to spread Hinduism can we fulfill Gurudeva's mission.

There is another practice which has been in vogue for a long, long time. That is the practice of establishing a shrine in honor of the kings and poets who performed the sacred task of temple building. This was called the 'Temple Builder Shrine'. We have always followed tradition. In this too, if we could build a small temple for Gurudeva, so that pilgrims can go down to the river to wash their hands, feet and face, have darshan at the Gurudeva Temple and then come to Iraivan. This should be done before the Kumbhabhishekam or at least, within a couple of months of it. Then, work can start on the second courtyard of Iraivan Temple. In this way, the Temple-Building work of the Aadheenam will continue. As long as the Temple stands, so will the Aadheenam. In that there is no doubt.

This is why, I believe that nobody's work is done when the current scope of Iraivan Temple work is completed.

There is a practice in our country. A father nurtures his son, supports in his growth into a smart and intelligent person. Later, the son performs his duty towards his father. This is what Thiruvalluvar said in Verse 67.

This means, it is the duty of the father to bring up his son such that he is able to hold his own among men of great learning.

I have one daughter and 3 sons. In accordance with this Kural, I educated my first 3 children well. Born as stone-carvers, we are not very rich people. But, I did not want my children to face the difficulties and insults that I faced due to my not being educated. That was the motivation for me to educate my children. For my youngest son, too, I did not want to be amiss in my duty. He got a Diploma in Computer Technology. Then, following the advice of many well-wishers I arranged for him to enroll for a Bachelor's Degree in Engineering. This was just before I came to Kauai.

One month ago, there arose a big confusion in my mind. I got a call from my home that this education would cost Rs. 280,000, including donation and fees. I was confused. Where do I go for this amount of money? I am here at this time. Were I at home, I might get some kind of financial support for my son. What can I do from here? A great deal of confusion!

Finally, a thought came through to my blinded mind. Why am I thinking of going here and there for help? Am I not here because Gurudeva brought me here for his work? Why should I not ask him for help?

For many days after that, I held Gurudeva in my mind, and prayed for him to get my son's admission. During this time, I got an email that my son had a counseling session on the 28th. On the 26th, at 00:10 a.m. I got a call from my eldest son. He said, "I have good news. Muthu Ganapathi has a got a free seat in the college, even before his counseling session."

How do you think all this happened? It happened because of our Gurudeva. He could do such a big help for someone like me. What would he not do for you all, who are inheritors of his limitless love?

Belief is the central root of Hinduism. Believe in Gurudeva totally. Gurudeva has not gone anywhere far away from us. He has given his shakti to Satguru Bodhinatha Veylanswami and in a different form is showering blessings on us.

Contribute more than before to the Iraivan Temple. Gurudeva will protect you always. Do not wait to be told what to do. Don't look for instructions. Spend all your free time towards the Temple. Put aside a large portion of your earnings for the Temple.