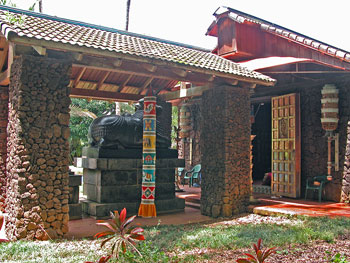 Kadavul is our Nataraja temple, established in 1973, where the monks worship and meditate together each morning. There is a sixteen-ton Nandi bull who worships Siva day and night from his pavilion out front.

(Entry to our small Kadavul Temple building itself is only for personal worship/meditation, and is now by reservation. You may reserve to attend our 9am Siva puja, or more brief entry at 11am. Please visit our reservations page for a reservation.)

Read on to learn about the scriptures, denomination of Hinduism and specific philosophy followed at Kadavul Temple, as well as the Deity who is worshiped, the priests who worship Him and the founder's dynamic vision that made the temple manifest.

Kadavul Hindu Temple is a traditional Sri Lankan style Siva temple. It is the spiritual nucleus of Kauai Aadheenam, a 382-acre monastery/temple complex also known as Kauai's Hindu Monastery. It is the primary temple for the resident monastics, who meet here each morning for Siva puja in the early hours before dawn. The monks rotate in three-hour vigils during which time they worship, meditate, chant, practice Sanskrit and perform personal spiritual disciplines. This sadhana has been maintained since the temple was established in 1973, adding to the temple's profound power which changes the lives of many a visitor, much like the ancient temples of South India.

Supreme God Siva is enshrined in the main sanctum in the form of Nataraja and a crystal Sivalingam. In front of Siva's sanctum is a 700-pound, 3-foot-tall, naturally formed crystal Sivalingam (among the largest known sphatika svayambhu lingams in the world) that will one day become the primary image of worship in the hand-carved white granite Iraivan Temple now being built nearby on the monastery property. Six-foot-tall black granite murtis of Lord Ganesha and Lord Murugan (Karttikeya, riding on a peacock and thus called Shikivahana) are installed in two side shrines. There is also an Ardhanarishvara murti and an elaborate silver trident (trishula), symbol of God Siva's three fundamental powers of desire, action and wisdom. Lining the main walls of the temple is a rare collection of Siva's 108 tandava dance poses in 16-inch-tall bronze icons covered with gold leaf. The shrine for the temple's founder, Satguru Sivaya Subramuniyaswami, affectionately known as Gurudeva (1927-2001), was established to the right of the entry door on the first anniversary of his mahasamadhi. Just in front of the temple stands a lava rock and redwood timber pavilion for Nandi the bull, Siva's mount and devotee, a giant form weighing 32,000 pounds, carved from a single stone. A small temple tank has a bronze statue of Saint Sambandar, dancing joyously. Kadavul Temple is open to the public everyday from 9am to noon.

Kadavul Hindu Temple follows the Saivite tradition, the oldest of the four main denominations of Hinduism. In the Tamil language of South India, our religion is known as Saiva Samayam, or simply Saivam. We worship the one Supreme Being as God Siva, and Lords Ganesha and Murugan, whom God Siva created to assist Him in the care of His great creation. In Saivism, Shakti is God Siva's manifest power and is not separate from Him. This is depicted most clearly in the image of God Siva as Ardhanarishvara, whose left side is female and right side is male. In Kadavul there is no separate Deity representing Shakti, for in our tradition the Supreme Being is neither male nor female, but encompasses both.

Every Hindu temple relies on a sacred text as its source of spiritual ritual, usually an Agama. The Agamas are an enormous collection of Sanskrit scriptures which, along with the Vedas, are revered as revealed scripture. Like the Vedas, the Agamas (literally "that which came down") were part of an oral tradition. As old as 7,000-8,000 years, the Agamas are the primary source and authority for ritual, yoga and temple construction. In the South Indian Saivite tradition, there are 28 Saiva Agamas. As in temples run by the Sivacharyas of South India, the traditional liturgy performed in Kadavul Hindu Temple takes as its spiritual authority the Kamika and Karana Agamas, and their derivative priestly manuals.

We worship the Supreme Being as Siva, enshrined in the main sanctum in two forms: a spotless crystal Lingam and a 6-foot-tall bronze murti of Nataraja. Worship of the Sivalingam in India dates back to the very beginning of the Saivite religion, millennia ago. The Lingam is the most prevalent emblem of Siva, found in virtually all Siva temples. It is the simplest and most ancient symbol of God representing Absolute Reality, Parasiva, beyond all forms and qualities. Nataraja, "King of Dance," is perhaps Hinduism's richest and most eloquent symbol, representing God with form, known as Parameshvara, the "Supreme Ruler" or Primal Soul. The dance of Siva is the dance of the entire cosmos. Within the symbolism of Siva's dance we find His five powers, or shaktis: 1) creation or emanation; 2) preservation; 3) destruction, dissolution or absorption; 4) obscuring grace, the power which hides the truth, thereby permitting experience, growth and fulfillment of destiny; and 5) revealing grace, which grants knowledge and severs the soul's bonds. Temples with prominent Nataraja images are rare and are found primarily in South India, most notably at Chidambaram, though there are Nataraja temples in Sri Lanka and Kashmir.

As Kadavul Hindu Temple is part of a monastery, the mathavasis, or monastics, naturally form its primary priesthood. The monks' potent spiritual disciplines make the temple powerful, its vibration pure. The monks perform pujas every three hours in Kadavul Temple, 24 hours a day, 365 days a year. The primary daily puja is held at 9:00am. Under the aegis of the late Sivashri Dr. T.S. Sambamurthy Sivachariar, head of the South India Archaka Sangam, Adisaiva priests came to Kauai's Hindu Monastery in the mid-1980s to train qualified monastics in the art of parartha puja, "worship for the benefit of others," to be performed daily in the Aadheenam's established temples. Up until this time, only Saivite brahmins of the hereditary Adisaiva priest lineage were entitled to conduct rites in Agamic Siva temples. Kadavul Temple brings adept Adisaiva priests from South India or elsewhere for special ceremonies, such as kumbhabhishekams and other major events. Sometimes we also have unmarried Adisaivas help with the daily pujas in the temple and provide additional chanting and pujari training to the mathavasis.

The philosophy followed and taught at Kadavul Hindu Temple is the non-dualistic Saiva Siddhanta (Advaita Siddhanta) of Rishi Tirumular and his guru, Maharishi Nandinatha (ca 250 bce), which proclaims that God Siva is Love, both immanent and transcendent, both the creator and the creation. He is the totality of all, understood in three perfections: Parameshvara (the Personal Creator Lord), Parashakti (the energy which permeates all form) and Parasiva (Absolute Reality which transcends all). Simply put, God Siva is all, and is in all. Souls and world are identical in essence with Siva, yet also differ in that they are evolving. This philosophy differs from the dualistic form of Saiva Siddhanta propounded by Meykandar (ca 1250 ce), which teaches that God is Lord and Creator, but He remains ever separate from man and the world. For more information about the Saiva Siddhanta philosophy, see Gurudeva's book Dancing with Siva, Hinduism's Contemporary Catechism.

It is said that the most powerful temples are those founded by the Gods themselves through visions. Kadavul Hindu Temple is such a temple. Gurudeva describes his vision and the events leading up to the temple's founding: "At Mahasivaratri time in 1973, in the jungles of Kauai, our Kadavul Nataraja Deity, Lord of the Dance, arrived at Kauai Aadheenam and was placed in the gardens overlooking the sacred Wailua River, where it was spontaneously decorated, bathed and worshiped. That night the exact location of the Deity's installation was chosen by Lord Muruga Himself when He appeared to me in an early morning vision, upturned His glistening vel, His scepter of spiritual discernment, and powerfully pounded its point three times on the cement steps at the Aadheenam entrance, marking the precise spot to place the Deity." This mystical vision marked the founding of Kadavul Hindu Temple. Shortly after the installation of the Nataraja Deity, Gurudeva received what he called "a magical boon" of reading clairvoyantly from inner-plane manuscripts, which he then dictated to his monks over a two-year period. These writings from the devas and Mahadevas formed the shastras, spiritual instructions, that now guide his monastic order. During the same time, Gurudeva received devonic directions that written prayers could be sent to the inner world devas by being burned in the sacred fire inside Kadavul Temple. On auspicious days, hundreds of prayers from all over the world are offered into the temple fire. The magical happenings and answers to these petitions have become part of the temple's renown. Writing and delivering prayers to the Devaloka through the sacred fire is an ancient Natha Sampradaya practice. Today this method of communication is still employed in Shinto and Taoist temples in Japan, China, Singapore, Malaysia and other areas of Southeast Asia. The prayers are written down and placed in the temple fire. As the paper burns, the astral double of the prayer appears in the Devaloka. The prayer is then read by the devas, who proceed to carry out the devotee's requests. These temple devas are fully dedicated to assist all who come through the temple doors with their emotional, mental and physical problems.