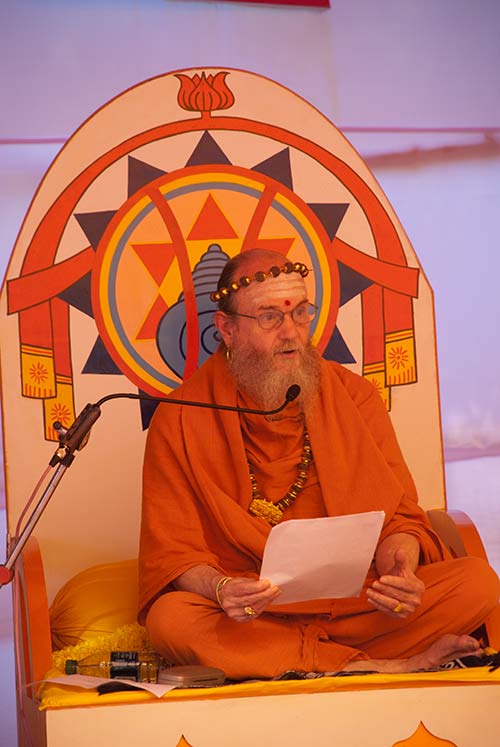 Bodhinatha and Palaniswami have moved on, but we received some photos of their activities at the Sri Goloka Nimbarka Semmelan held at the Sri Golokdham Ashram in Delhi Golok Dham. This was the main focus and primary mission of this trip to India having been invited by His Holiness Dharma Ratnam Swami Shri Gopal Sharan Devacharya Maharaj

Here is Bodhinatha giving his talk on the main public day when all the saints gave their discourses which were aired on Ashta TV.

“The main event was under a large tent, and went from 1:30 to 4:00, with Bodhinatha’s talk taking the first thirty minutes, followed by three long discourses in Hindi. He spoke on the parallels between our own monistic theism and the Dvaita-Advaita of the Nimbarka tradition, and he urged families to have a shrine in their home and worship there daily. Many comments afterwards on his talk.

“Seems his pragmatic discourses are so different from the normal Puranic stories and Gita interpretations that they stand out more here than at home as useful. Tools you can use in life.” This is His Holiness, Jagadguru Nimbarkacharya Shri Shriji Maharaj. He is the living force behind the global Nimbarka sampradaya and the many works done at various centers. He gave a rousing talk, full of philosophical reflection, with a power that belies his 93 years.

An ascetic of the highest order, he does his own laundry and food, travels with a vengeance and speaks powerfully. 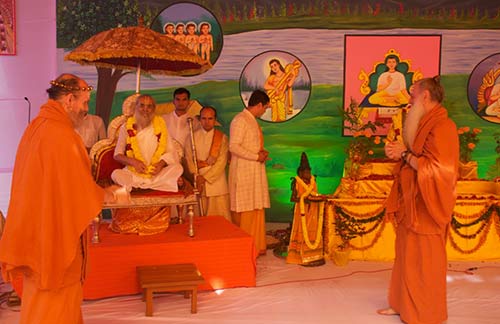 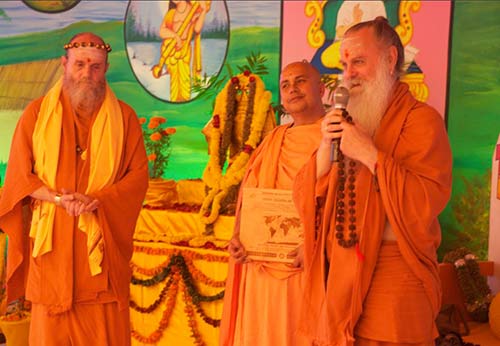 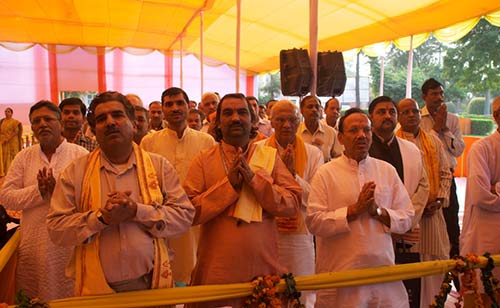 An appreciative crowd of devotees…. 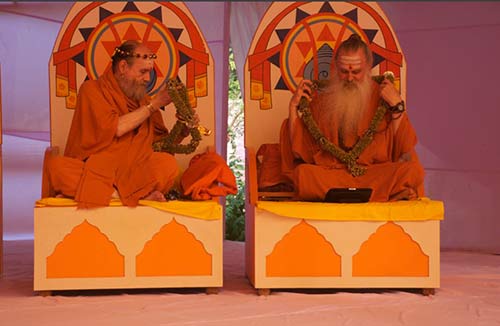 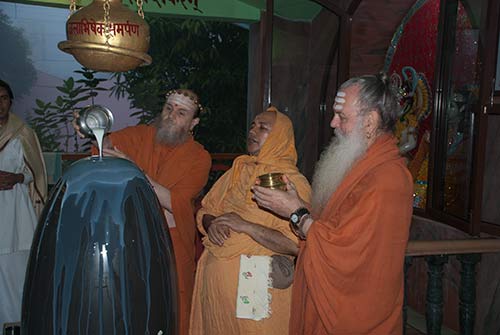 Beside the public events, Bodhinatha and Palaniswami had the special privilege to join Swami for his morning sadhana.

Today we again joined Sri Gopal Sharan Devacharya for worship of the giant Sivalingam in his Golok Dham gardens. It is an essential part of the Nimbarka Sampradaya, which is otherwise strictly Vaishnava, to worship Siva, and their form of worship includes Ganesha and Muruga and Nandi. We felt so at home in the open pavilion where he does a 40-minute puja each dawn. 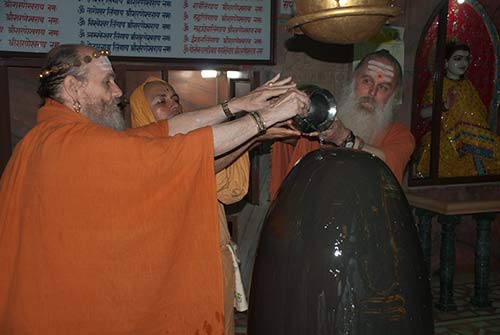 Sri Gopal Sharan Devacharya invited us to come to his side today and join in every offering. It was a bit blissful, the three of us offering chandanam (they stone grind the real thing each morning, adding a little saffron for color), durva grass, flowers, and hand bathing the lingam with fragrant oils, a kind of loving oil message we all gave for our dear Siva. 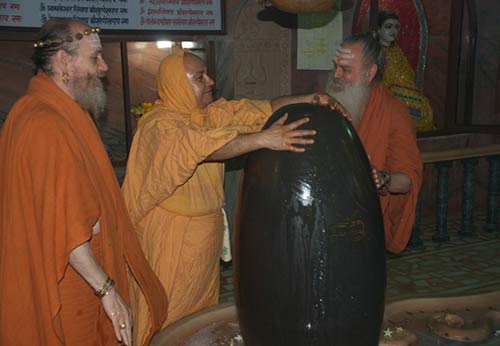 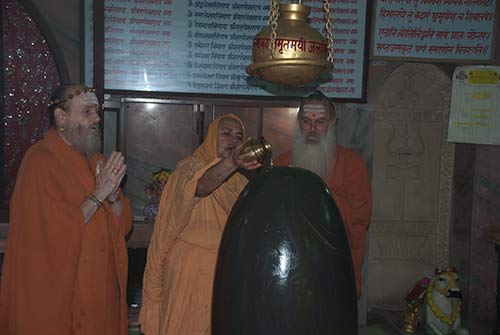 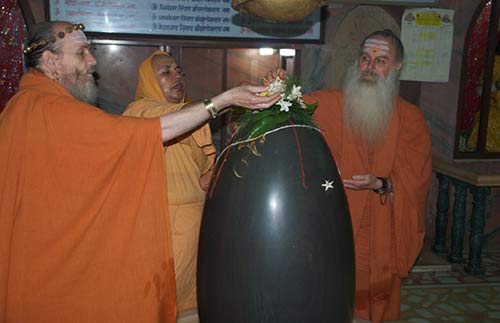 Then to an hour of sitting in their marble mandir before the Radha Krishna shrine, complete with a five piece musical group three feet from us singing the most delightful songs, all written by them and about their lineage. Great tabla and bansari flute compositions. At nine Guruji invited us to sit with him for the abhishekam of a delightful ten-inch bronze of Nimbarkacharya, all in a circular marble clad chamber some fifteen feet in diameter. It is his private worship of the founder of the lineage.

Nimbarka was a yogi and ascetic who ate, for years, just a few ounces of neem juice each day. His yoga led him to deep devotion and thus their emphasis on both advaita and dvaita. He was the first to propose that Krishna and Radha were bound in perfect unity as a singular and absolute Deity. We departed Golok Dham Ashram at five pm, meeting one last time with Guruji, exchanging gifts and goodwill between our fellowships. He gave his Hawaiian guests a big hug as we departed and, following his tradition, with a mischievous smile placed a one inch sweet ball-like goodie in our mouths! Enough sugar for a week in one bite. Thank you, Siva, for this wonderful sangam, this meeting of traditions.

This entry was posted on Saturday, November 20, 2010 at 5:42 pm and is filed under Bodhinatha, Travel Missions. You can follow any responses to this entry through the RSS 2.0 feed. You can skip to the end and leave a response. Pinging is currently not allowed.