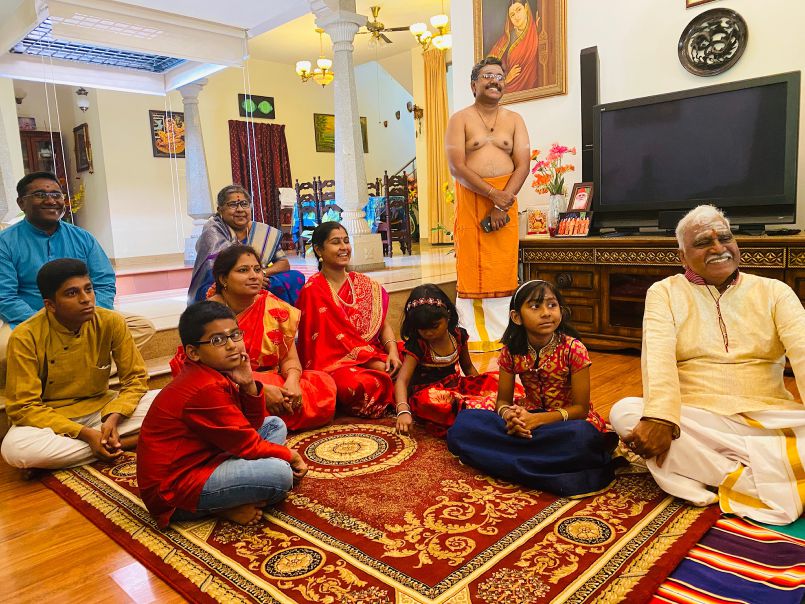 Satguru's travels continue. After making his way up to Bengaluru, he and Sannyasin Shanmuganathaswami visited the Rajasankara's home and adjacent carving site. While there they got to see the remaining red-granite pots which will sit upon Iraivan Temple's perimeter wall. These are almost finished and will eventually be shipped to Kauai. Next, our travelers took a flight to Malaysia.

This entry was posted on Thursday, January 30, 2020 at 5:00 pm and is filed under Bodhinatha, Travel Missions. You can follow any responses to this entry through the RSS 2.0 feed. You can leave a response, or trackback from your own site. 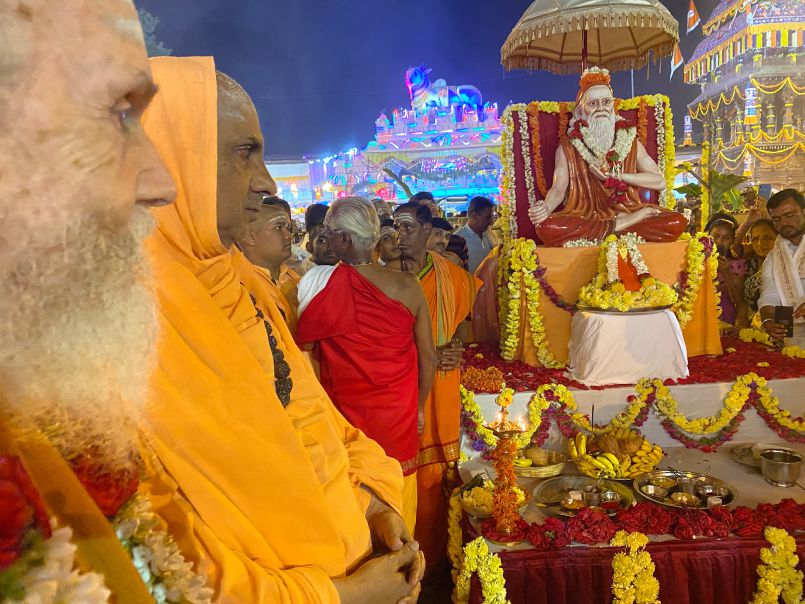 Several Days ago, Satguru visited JSS Mutt in Mysuru, Karnataka. Satguru was there to attend the Mutt's annual celebration of Jatra Mahotsava, to their founder, Adi Jagadguru Sri Shivarathreeshwara Shivayogi Mahasamji. Thousands of people from around the area were there to pay their respects to this great being, and to celebrate the lineage and all its wonderful works.

This entry was posted on Tuesday, January 28, 2020 at 11:17 am and is filed under Bodhinatha, Travel Missions. You can follow any responses to this entry through the RSS 2.0 feed. You can leave a response, or trackback from your own site. 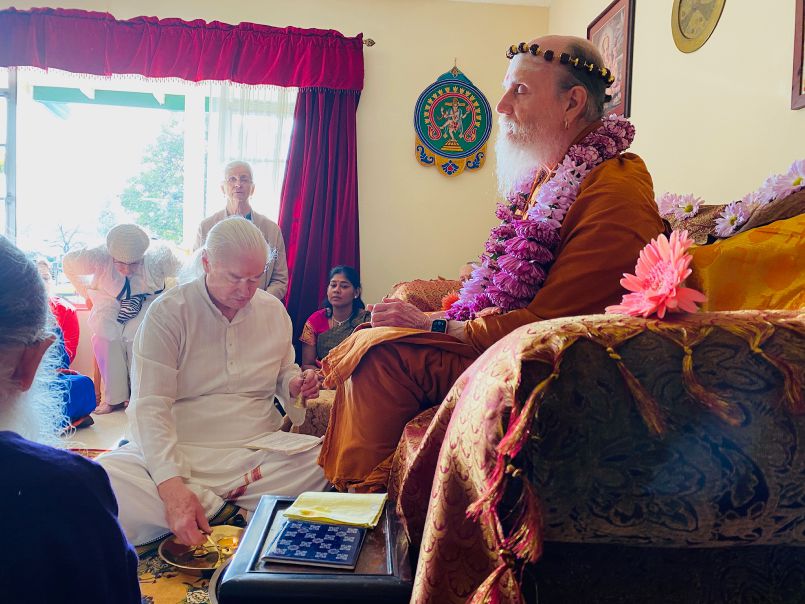 For the past few days Satguru has been in the Bay Area. Satguru attended Satsang with members in Concord as well as with the Bhajanai group, a group of Sri Lankan who have been gathering together for some 15 years. Aum.

This entry was posted on Tuesday, January 21, 2020 at 12:45 pm and is filed under Bodhinatha, Travel Missions. You can follow any responses to this entry through the RSS 2.0 feed. Both comments and pings are currently closed. 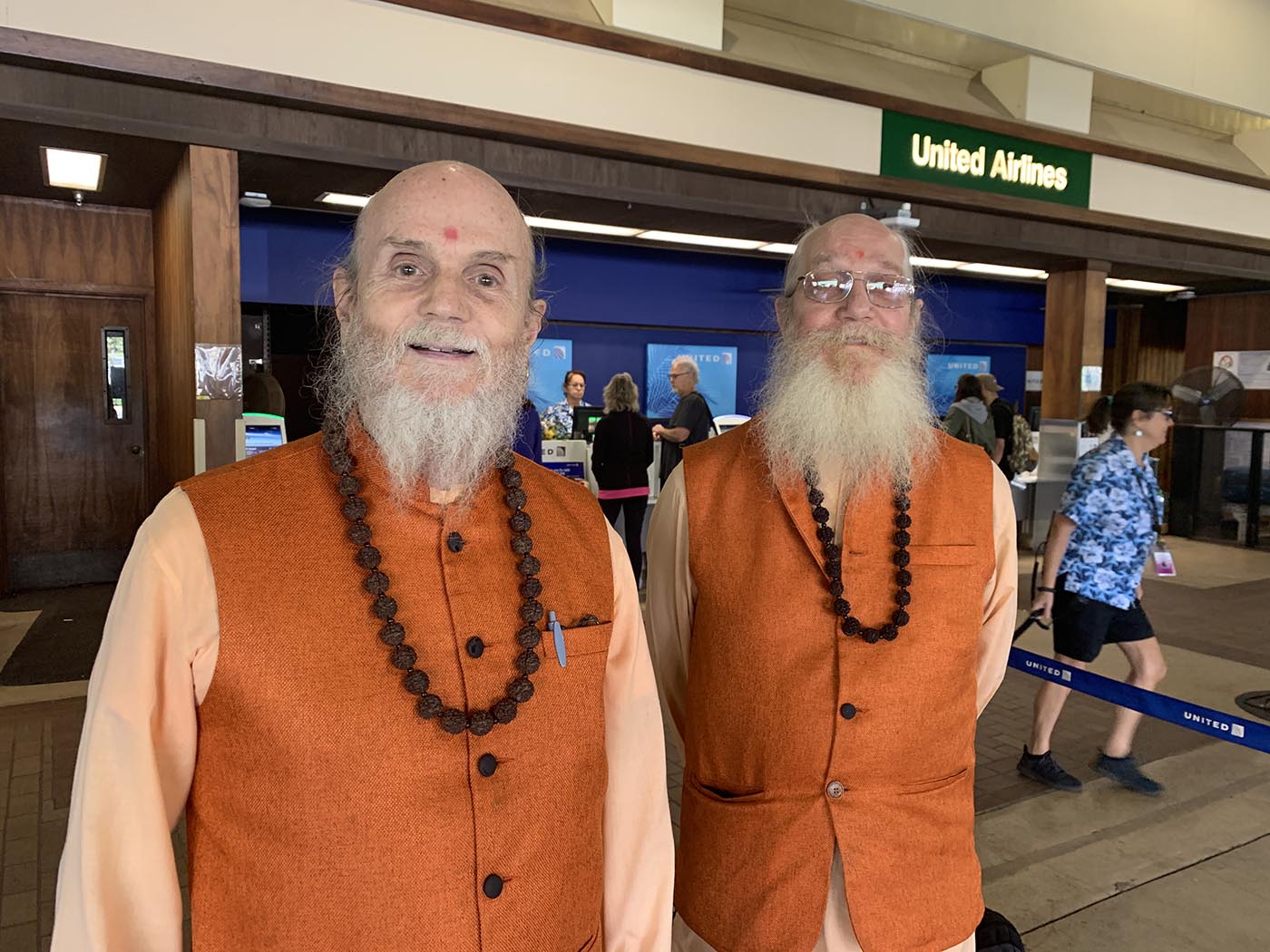 Recently, Satguru Bodhinatha Veylanswami and Sannyasin Shanmuganathaswami left on their next adventure. This time Satguru will be visiting San Francisco, India and Malaysia. See more details about their destinations on our travel page

This entry was posted on Monday, January 20, 2020 at 11:58 am and is filed under Bodhinatha, Travel Missions. You can follow any responses to this entry through the RSS 2.0 feed. You can leave a response, or trackback from your own site. 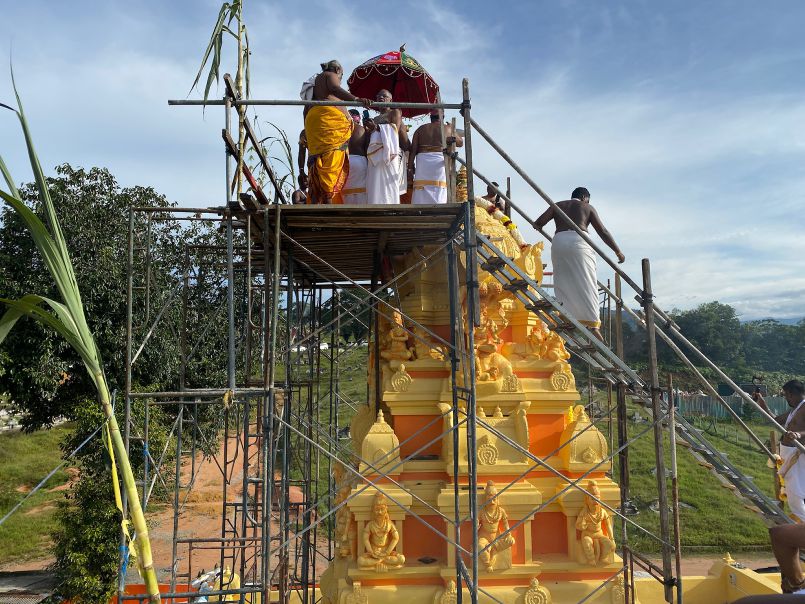 Photos from Satguru's recent trip to Malaysia to meet with members and to attend the kumbhabhishekam for the Tapah Siddhar Temple.

This entry was posted on Thursday, December 5, 2019 at 4:35 pm and is filed under Bodhinatha, Travel Missions. You can follow any responses to this entry through the RSS 2.0 feed. You can leave a response, or trackback from your own site. 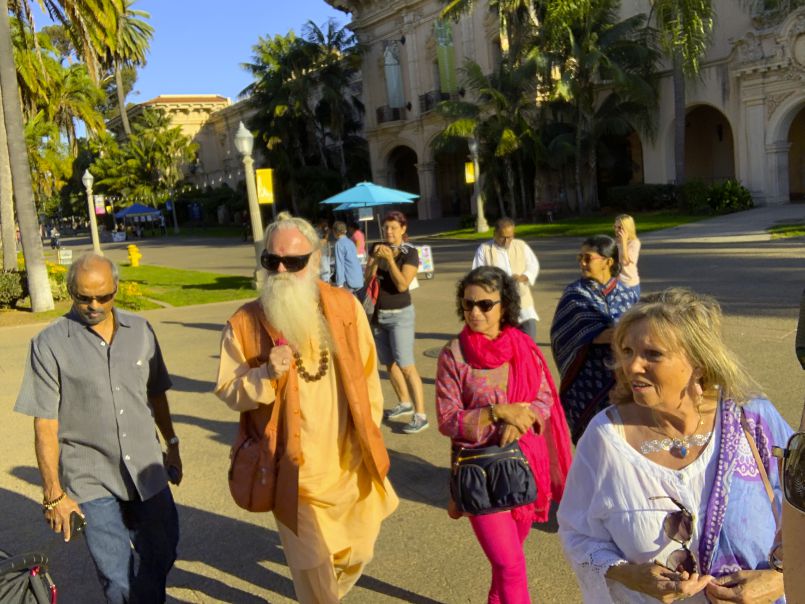 In early October, Paramacharya Sadasivanathaswami and Yogi Jayanatha traveled from Canada down to Southern California. There, they visited members' homes and had satsang. This was their final stop before returning to Kauai from their 25 day journey on October 6th. Aum.

This entry was posted on Friday, October 18, 2019 at 5:10 pm and is filed under Travel Missions. You can follow any responses to this entry through the RSS 2.0 feed. You can leave a response, or trackback from your own site. 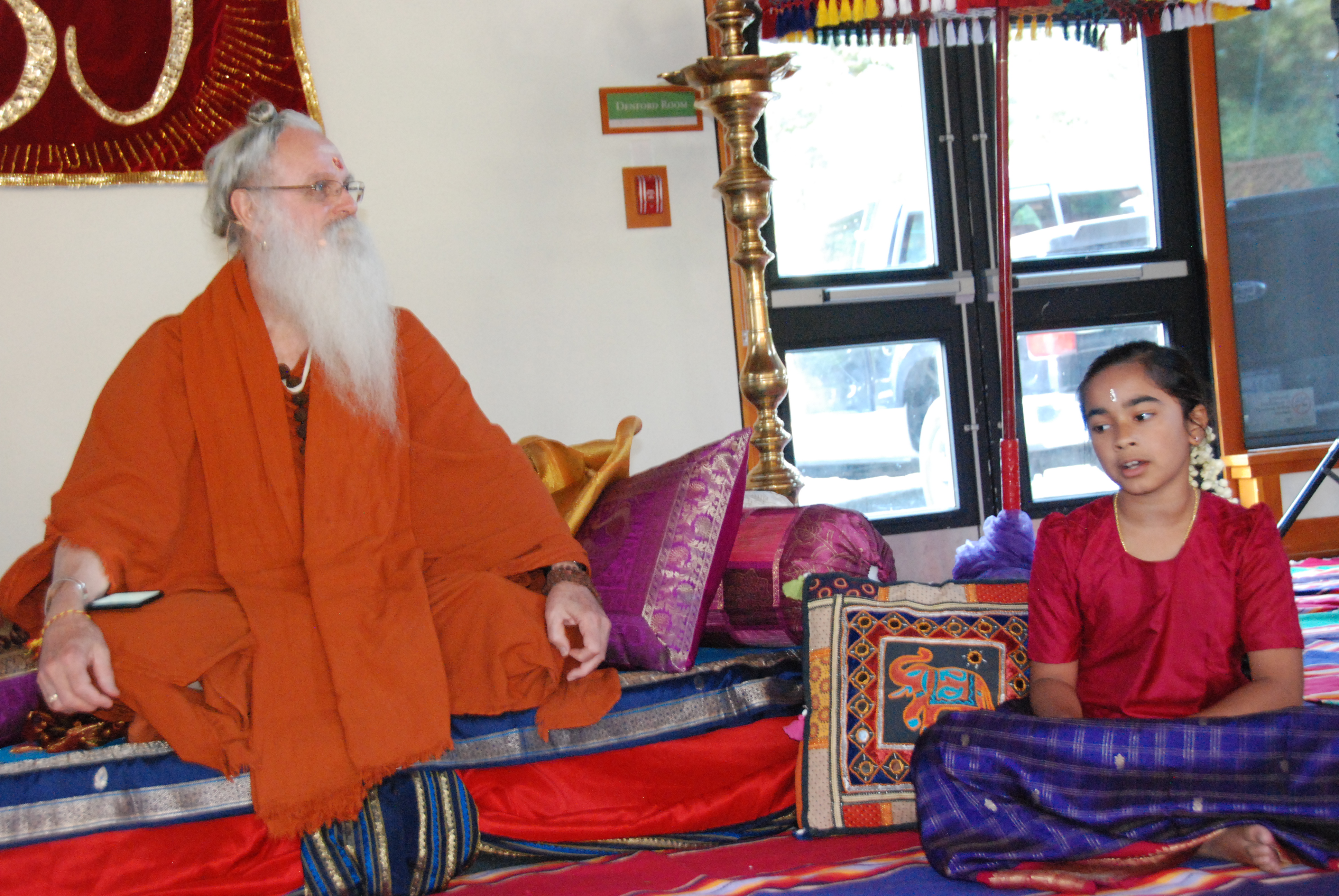 At the end of September, Paramacharya Sadasivanathswami and Yogi Jayanatha traveled up from Tucson to Canada. While there their primary hosts were the Pillay family, who first took them for a quick visit to one of Canada's most beautiful national parks, Banff in Alberta. Following their exploration of Canada's natural beauty, they then traveled to the city of Victoria, British Columbia. While there, they visited the Pillay's home and and event was held for Paramacharya to give a public talk to more than 100 seekers and devotees. Paramacharya's talk was focused on the intricacies of meditation and on the complexities of karma. The talk was deeply appreciated by those who attended.

This entry was posted on Thursday, October 17, 2019 at 10:33 am and is filed under Travel Missions. You can follow any responses to this entry through the RSS 2.0 feed. You can leave a response, or trackback from your own site. 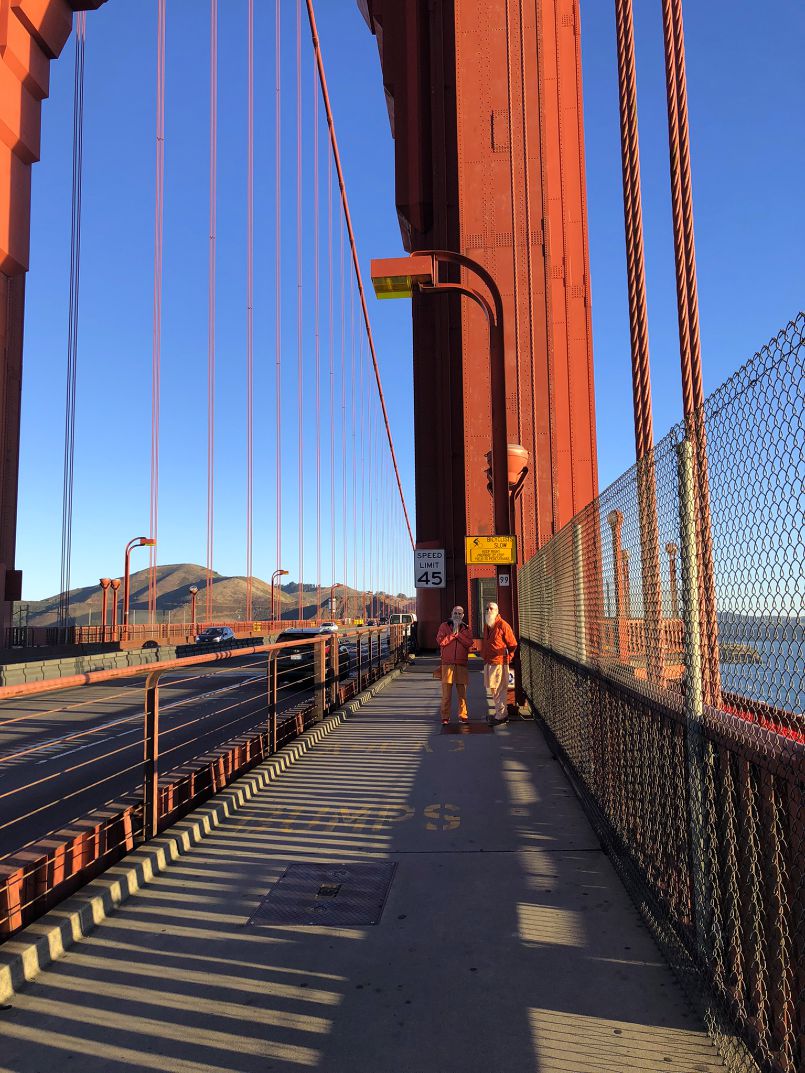 Satguru Bodhinatha Veylanswami and Sannyasin Shanmuganathaswami have been actively making their way through California, Arizona and Texas. Here are a few photos of their adventure.

This entry was posted on Thursday, October 10, 2019 at 4:15 pm and is filed under Travel Missions. You can follow any responses to this entry through the RSS 2.0 feed. You can leave a response, or trackback from your own site. 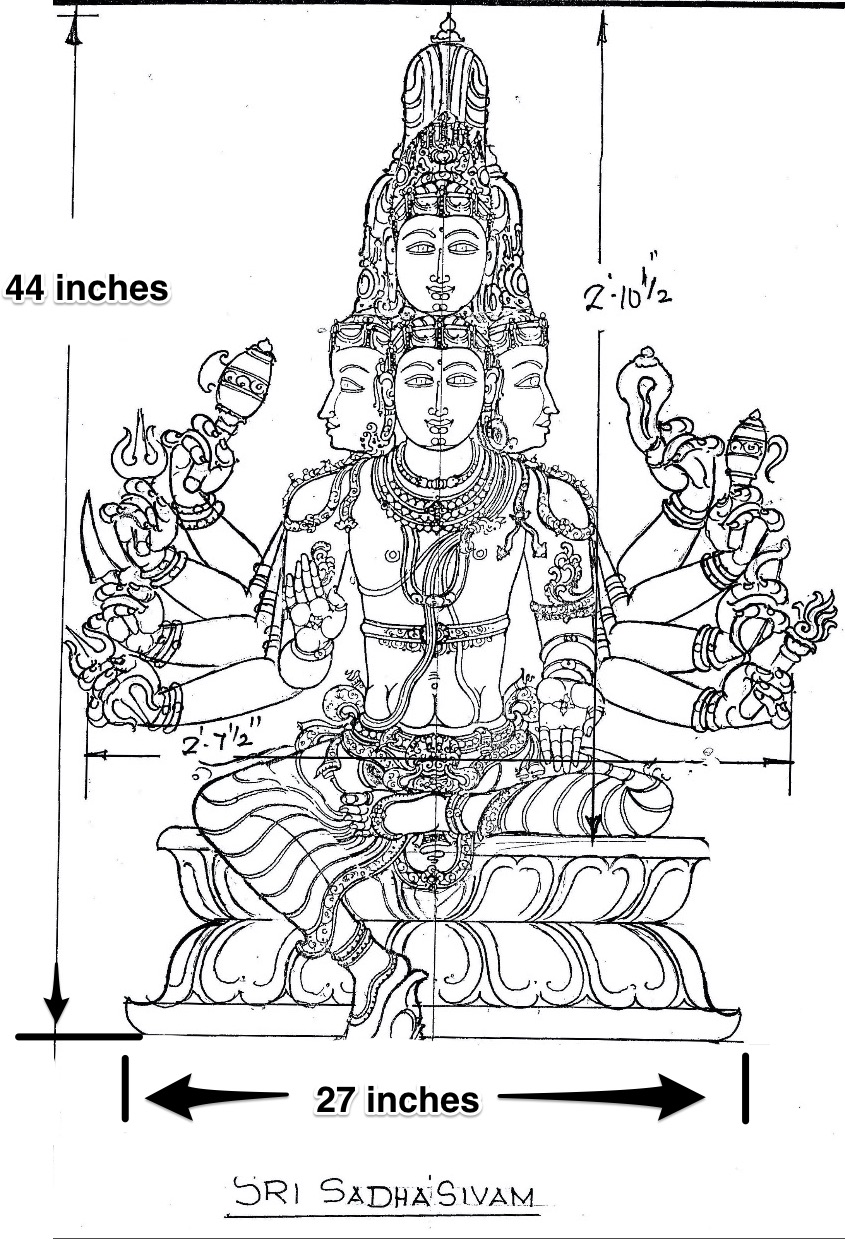 On September 23 and 24 something unexpected and quite inexplicable took place.

Natalie took Paramacharya Sadasivanathaswami and Yogi Jayanatha to the foundry to work with the team in applying the patina to Natalie's bronze Siva. This is the surface color and texture created with heat and chemistry. Under high heat, various chemicals like sulphur and cupric bond permanently to the molecules in the metal.

We performed a simple arati to bless this final and oh-so-important stage. We decided on a dark patina with subtle blue inclusions, meant to make the metal look like stone instead of steel.

It went well for couple of hours, but then the chemist working on the piece became overly enthused and began adding more and more cupric, more and more blue.

The day ended and we left.

Both Natalie and Sadasivanathaswami kept revisiting the color that had been achieved, and both were concerned it was excessively blue.

After consulting, they decided to cancel a mountain trek and return to the foundry and ask the team to redo the statue. It would require them to sandblast off the blue patina, and reapply a new one more link what we had all agreed on.

Reaching the foundry, they were greeted by Paul who said,"You must come and see what happened overnight!"

He took us back to the Sadasiva, and to our astonishment, the metal was no longer bright blue. It had changed overnight, despite the fact that it had been heavily lacquered and also given two layers of clear wax to keep out the humidity.

Paul was amazed. In his ten years of patina work he had never seen anything like this. Not only had the color changed, but it changed to exactly match what was originally asked for. Paul had never seen this happen, and called it a miracle (see his several short videos trying to explain the inexplicable!)

For Natalie, it seemed as if Siva Himself had taken charge of the patina. She hired a photographer, Robin, to capture the final murti, then set in motion the crating and shipping to Kauai.

Thank you, Jim and Natalie, for an amazing gift to the monastery, full of art and spiritual meanings to last 1,000 years. We believe this may be the first traditional Sadasiva murti every made in the West.

Natalie Reflects on the Murti

"A big challenge for me in sculpting Hindu deities in clay was to conform to a template for creating a traditionally proportioned murti which followed a precise representation of divine proportion and sacred geometry, rather than follow my own free spirited intuitive approach. Deeper understanding required increased study of Hinduism and Indian art, as expressed in the cultural gods and goddesses.

"I had to be creative within the context yet honor the traditional form rich with symbolism, inherent in this kind of imagery. And more than that, I needed to breathe life into the sculpture so that Sadasiva's essence could be felt by all.

"Surrender to the Divine" was my mantra for 2 years not only was it an incredible focus of my love and devotion, but the spiritual gifts received from being of service to Siva and the divine dimension of Love, enriched my life in innumerable ways. These are gifts of melting our ego.

"I am grateful for this experience and honored to be of service to the divine through my art."

This entry was posted on Thursday, October 10, 2019 at 3:29 pm and is filed under Travel Missions. You can follow any responses to this entry through the RSS 2.0 feed. You can leave a response, or trackback from your own site. 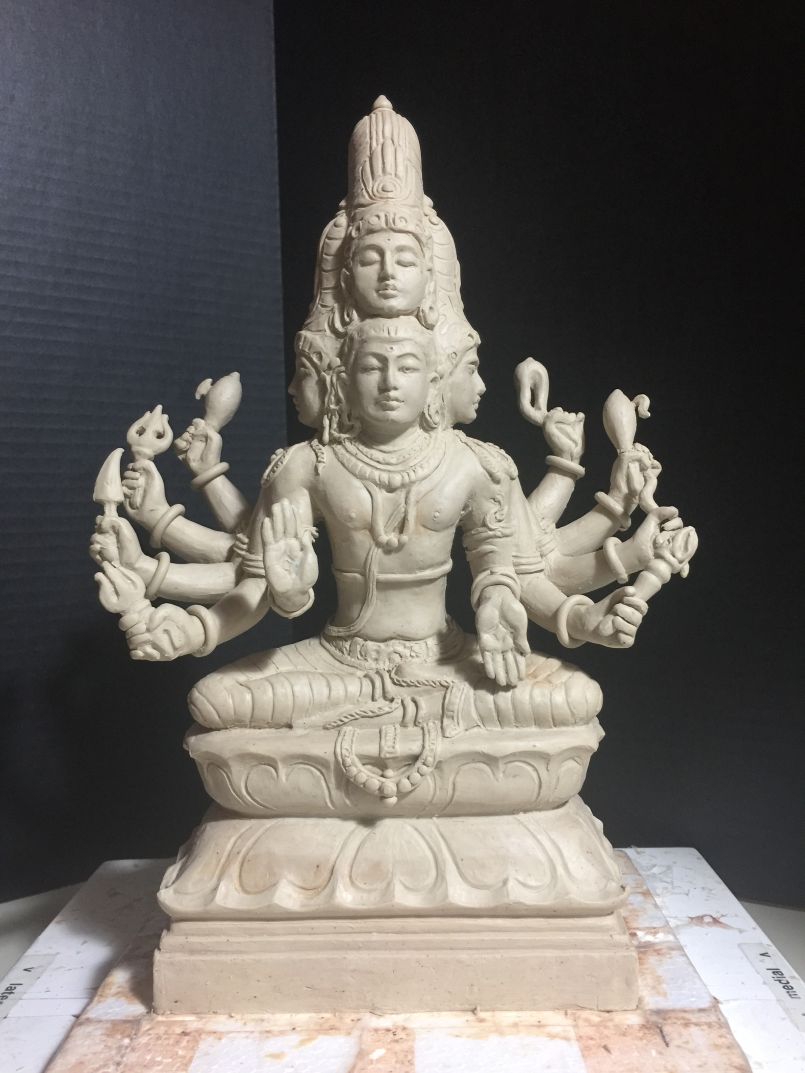 With the small maquette of the Five-Faced Siva done, Natalie turned to the harder task of moulding the full sized murthi. Every step was exacting, even demanding. Imagine, for instance, how one puts five arms and shoulders together on one side, and making them look natural. It's impossible, but Natalie make it work. She went through one style and another. Now the hands, then months on the ornaments, now the all-important faces and their expressions, each different to convey Siva's powers and moods. Months of effort on the implements and the fingers of each hand, and working so that it looks equally natural from the side as from the front. Emails back and forth to Kauai. Hundreds of emails, with attachments, "Swami, does this shape of the hand look better? Or this one? Now about this?"

Natalie met technical challenges at every turn. Scanners. Printers. Mould makers. Meeting one, two more arose. Throughout she chanted sacred slokas and mantras. She studied our Insight section in the magazine, sensing that the more she understood Siva the better the sculpture would be. Day followed day, month followed month, with nary a day off. Finally, the moulds went to the foundry and the metal casting began.

Natalie shares her experience: "I got super charged midway through the sculpting process when Paramacharya Sadasivanathaswami and Sannyasin Yoginathaswami made a stop in Tucson to check my progress on the murti. Their inspired guidance called for another style of headband on each of the 5 faces that involved small protruding beads rather than the indented style of beads I had created, and between each lotus petal along the headband defining a tiny row of vertical beads ascending in size, adding small vertical lines on the crown's jata, and lastly, enhancing the detail on all of the 10 objects that represent Siva's powers, referencing a style on the Nataraja and Sivas of antiquity that the Swami's wanted me to capture.

"These decorative changes made it so much richer! By fixing the headbands, all the faces needed to be re-sculpted again! (due in part from the clay I was using which had become too soft from continuous use of smoothing additives, which had caused a slight breakdown in the clay integrity, rendering the clay more difficult to achieve the desired firmness required to hold the precise detail.)

"Yoginathaswami shared with me the sacred sloka for Sadasiva and I began chanting it to invoke the murti into the form. Performing aarti with the sloka made for a transcendent work environment. I felt Siva's presence even more profoundly enabling me to bring the murti into completion.

"One noticeable grace I received after completing the murti, was that every creative project I did benefitted from this experience: my drawing and painting became enhanced, I saw more, I perceived more, and I had more patience and compassion than ever before. I felt deeper with a heightened sense of my own soul power, enriched with an experience that went way beyond space and time."

This entry was posted on Tuesday, October 8, 2019 at 11:03 am and is filed under Travel Missions. You can follow any responses to this entry through the RSS 2.0 feed. You can leave a response, or trackback from your own site.