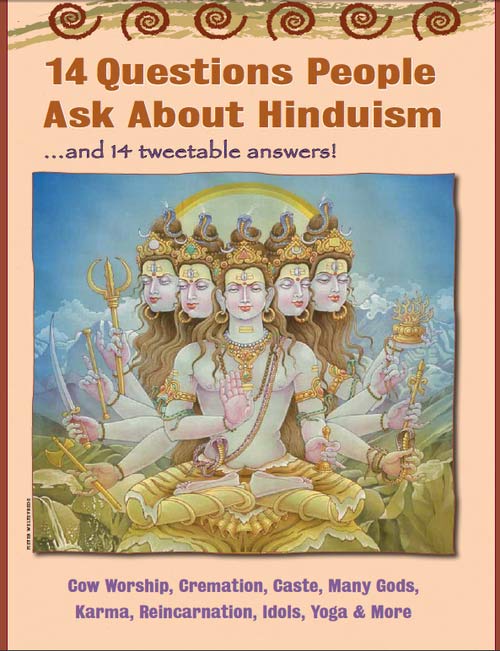 We have just added four more questions to our famed “10 Questions” pamphlet. They will appear in the next issue of Hinduism Today which is just now reaching the bookstores. We are sharing these, one at a time for our CyberCadets to enjoy and perhaps use when confronted with the inevitable questions. 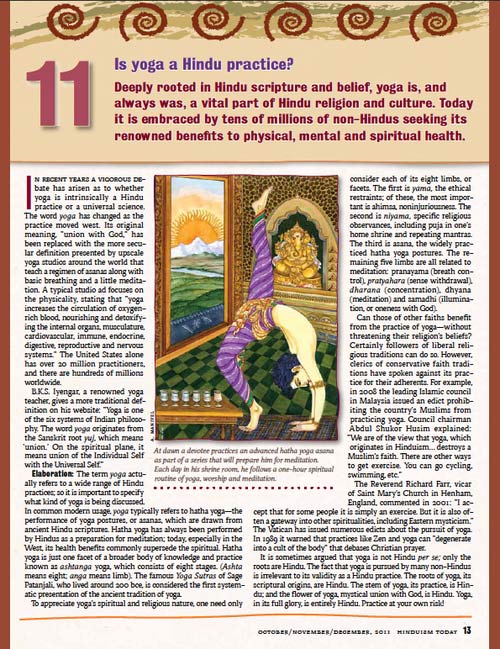 Question #11: Is yoga a Hindu practice? Deeply rooted in Hindu scripture and belief, yoga is, and always was, a vital part of Hindu religion and culture. Today it is embraced by tens of millions of non-Hindus seeking its renowned benefits to physical, mental and spiritual health.

In recent years a vigorous debate has arisen as to whether yoga is intrinsically a Hindu practice or a universal science. The word yoga has changed as the practice moved west. Its original meaning, “union with God,” has been replaced with the more secular definition presented by upscale yoga studios around the world that teach a regimen of asanas along with basic breathing and a little meditation. A typical studio ad focuses on the physicality, stating that “yoga increases the circulation of oxygenrich blood, nourishing and detoxifying the internal organs, musculature, cardiovascular, immune, endocrine, digestive, reproductive and nervous systems.” The United States alone has over 20 million practitioners, and there are hundreds of millions worldwide. B.K.S. Iyengar, a renowned yoga teacher, gives a more traditional definition on his website: “Yoga is one of the six systems of Indian philosophy. The word yoga originates from the Sanskrit root yuj, which means ‘union.’ On the spiritual plane, it means union of the Individual Self with the Universal Self.” Elaboration: The term yoga actually refers to a wide range of Hindu practices; so it is important to specify what kind of yoga is being discussed. In common modern usage, yoga typically refers to hatha yoga–the performance of yoga postures, or asanas, which are drawn from ancient Hindu scriptures. Hatha yoga has always been performed by Hindus as a preparation for meditation; today, especially in the West, its health benefits commonly supersede the spiritual. Hatha yoga is just one facet of a broader body of knowledge and practice known as ashtanga yoga, which consists of eight stages. (Ashta means eight; anga means limb). The famous Yoga Sutras of Sage Patanjali, who lived around 200 bce, is considered the first systematic presentation of the ancient tradition of yoga. To appreciate yoga’s spiritual and religious nature, one need only consider each of its eight limbs, or facets. The first is yama, the ethical restraints; of these, the most important is ahimsa, noninjuriousness. The second is niyama, specific religious observances, including puja in one’s home shrine and repeating mantras. The third is asana, the widely practiced hatha yoga postures. The remaining five limbs are all related to meditation: pranayama (breath control), pratyahara (sense withdrawal), dharana (concentration), dhyana (meditation) and samadhi (illumination, or oneness with God). Can those of other faiths benefit from the practice of yoga–without threatening their religion’s beliefs? Certainly followers of liberal religious traditions can do so. However, clerics of conservative faith traditions have spoken against its practice for their adherents. For example, in 2008 the leading Islamic council in Malaysia issued an edict prohibiting the country’s Muslims from practicing yoga. Council chairman Abdul Shukor Husim explained: “We are of the view that yoga, which originates in Hinduism… destroys a Muslim’s faith. There are other ways to get exercise. You can go cycling, swimming, etc.” The Reverend Richard Farr, vicar of Saint Mary’s Church in Henham, England, commented in 2001: “I accept that for some people it is simply an exercise. But it is also often a gateway into other spiritualities, including Eastern mysticism.” The Vatican has issued numerous edicts about the pursuit of yoga. In 1989 it warned that practices like Zen and yoga can “degenerate into a cult of the body” that debases Christian prayer. It is sometimes argued that yoga is not Hindu per se; only the roots are Hindu. The fact that yoga is pursued by many non-Hindus is irrelevant to its validity as a Hindu practice. The roots of yoga, its scriptural origins, are Hindu. The stem of yoga, its practice, is Hindu; and the flower of yoga, mystical union with God, is Hindu. Yoga, in its full glory, is entirely Hindu. Practice at your own risk!

This entry was posted on Thursday, September 8, 2011 at 7:30 pm and is filed under Publications. You can follow any responses to this entry through the RSS 2.0 feed. You can skip to the end and leave a response. Pinging is currently not allowed.

5 Responses to “Is Yoga Hindu or More Universalistic?”