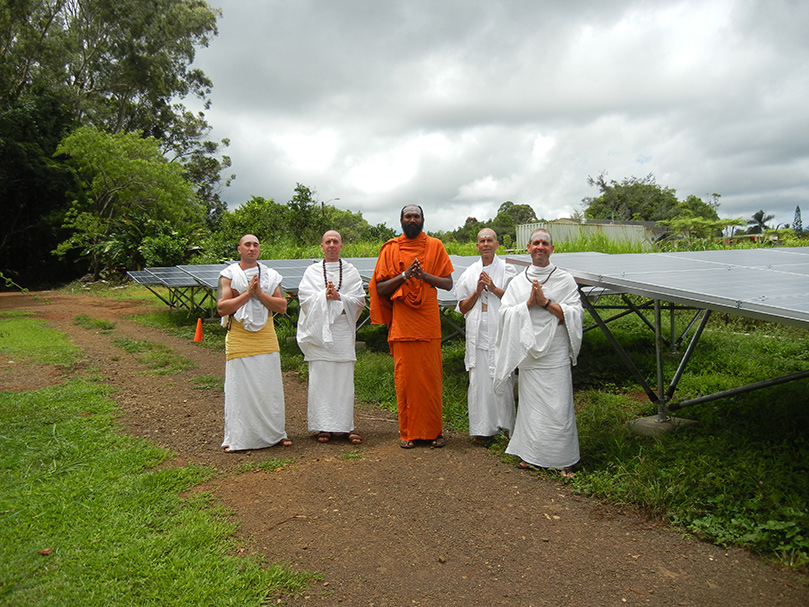 On July 4th the monks celebrated the completion of the monastery's new solar array, and its partial independence from the Island's diesel-generated power grid. A short blessing was performed and the array switch was turned on by Bodhinatha. You can see our array's activity live online at: enlighten.enphaseenergy.com In the ensuing months the monastery will monitor its daytime power usage and begin to adjust energy use for maximum solar effectivity. For example dehumidifiers can be timed for peak solar power hours rather then running at night. The hope is that a very large percent of all our power usage will be from our new array. The whole monastery and the Siddhidata Kulam especially want to thank Kulapati Easvan Param for all the work he has done to see this project come to reality. Over the past several years he has been selflessly providing consulting during all phases of the project and flying over to Kauai to assist with installation. He has even gone through the State of Hawaii, Electricians License exams to maintain a Hawaiian Electrician's license, just to be able to help the monastery in an official capacity. And with that in hand he did the final crucial hook up of the solar array to the grid. Mikka Nandri Easvan!

This entry was posted on Friday, July 5, 2013 at 6:43 pm and is filed under Self-Sufficiency. You can follow any responses to this entry through the RSS 2.0 feed. You can skip to the end and leave a response. Pinging is currently not allowed.