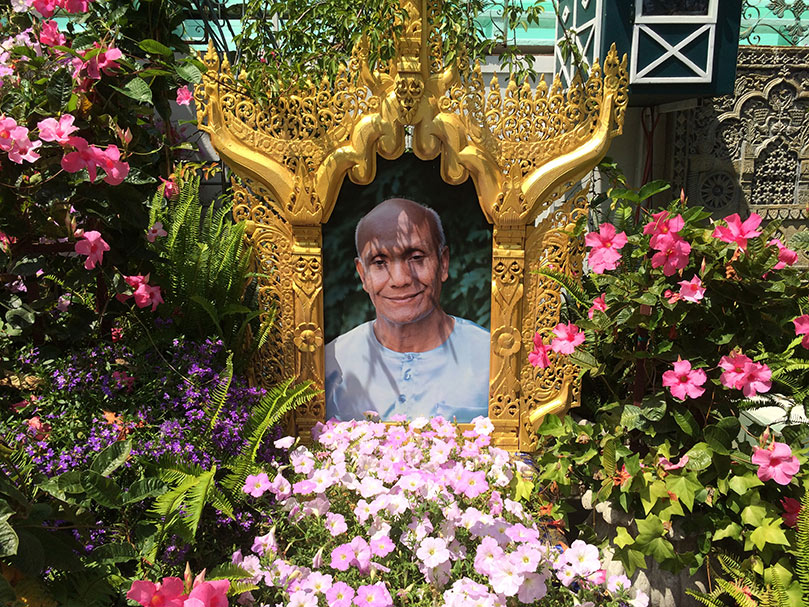 Following the visit to Divya Dham and the BSS center in Queens, New York (recently names America's most diverse community), the traveling swamis were taken to a special and hallowed garden. It is called Aspiration Ground, named by Sri Chinmoy who recalled that at school he found joy in the playground and later, as a guru, he found a greater joy here in Queens where his disciples aspired for the Self within.

The space is a flower-rich refuge from the world, which is only meters away, on the other side of green hedges and trees. This is where devotees have made the Samadhi for their Guru, Sri Chinmoy. It is a sacred space where his presence is nurtured and protected, and immediately one could feel this sage from Bengal. It was here, we were told, that he played tennis and afterwards sat for hours with seekers in meditation, giving precious upadeshas. As we sat, a recording of Sri Chinmoy speaking of the Absolute was played, a powerful call to the Within.

Kusumita Pedersen went to the microphone to introduce the guests from Hawaii to the 75 or 80 gathered devotees, who were here from around the world, to attend the annual anniversary of the center's founding. This is their 50th year, so it was a special time.

Kusumita recalled her first faxes in 1988 with Paramacharya and her unforgettable encounter with Gurudeva in Oxford at the Global for for Human Survival in that same year, and the six or seven times she was with him and Sadasivanathaswami in subsequent international conferences, and with Bodhinatha in Melbourne, Australia.

There followed a small choir which sang some angelic mystical poems from Sri Chinmoy, and also offered a delightful little hymn to Hinduism Today! Yes, a choral praise written by Sri Chinmoy and first sung by his disciples in the Media Studio during their 1998 visit to Kauai. Sadasivanathaswami quickly reached for his iPhone to record the last half of it which we will post for all to hear.

Poems were read and then Sadasivanathaswami spoke of our meetings over the years with Sri Chinmoy, including his giving the U Thant Peace Award to Gurudeva at the United Nations in 2000. Paramacharya spoke of the centrality of the guru and how Sri Chinmoy had impressed the monks with his remarkable outpouring of gratitude, an example to all to be thankful for Siva's infinite grace and abundances given.

Paramacharya shared that when he had asked, 15 years back, for a summary of Sri Chinmoy's philosophy, Kusumita sent a small book, no more than 80 pages, called Samadhi, in which the Guru spoke in remarkably profound Paramacharya ended with a quote from Kabir, the mystic and poet: "If all the land were turned to paper and all the seas turned to ink, and all the forests into pens to write with, they would still not suffice to describe the greatness of the guru." Paramaharya shared that this book inspired our own "Self & Samadhi" book gathering together all of Gurudeva's lofty writing of the Ineffable Self within all. He gave the center a copy of that book and also gifted all present with a rudraksha bead from Kauai's Rudraksha Forest.

Senthilnathaswami was called to the microphone and shared his 1998 encounter with Sri Chinmoy which was a moving tribute to how even a brief encounter with a great soul can endure through the years, and even grow stronger.

The guests from Hawaii were then treated to a tour of the heart of Sri Chinmoy's legacy of painting and photographs, kept in a pristine house that is a loving museum of the Guru who had his Mahasamadhi in 2007. The walls are covered with hundreds of photos of the meetings of world leaders and people of rare accomplishment with Sri Chinmoy who knew virtually every notable person you can imaging. A short walk across the street found us seated in a little restaurant, Annam Brama, that the disciples have run for many years, to feast on some amazing dishes.

There is, at Aspiration Ground, a palpable peace and there is in all of his disciples a remarkable Guru Bhakti and dedication to sadhana.

This entry was posted on Friday, August 15, 2014 at 3:08 pm and is filed under Travel Missions. You can follow any responses to this entry through the RSS 2.0 feed. You can skip to the end and leave a response. Pinging is currently not allowed.