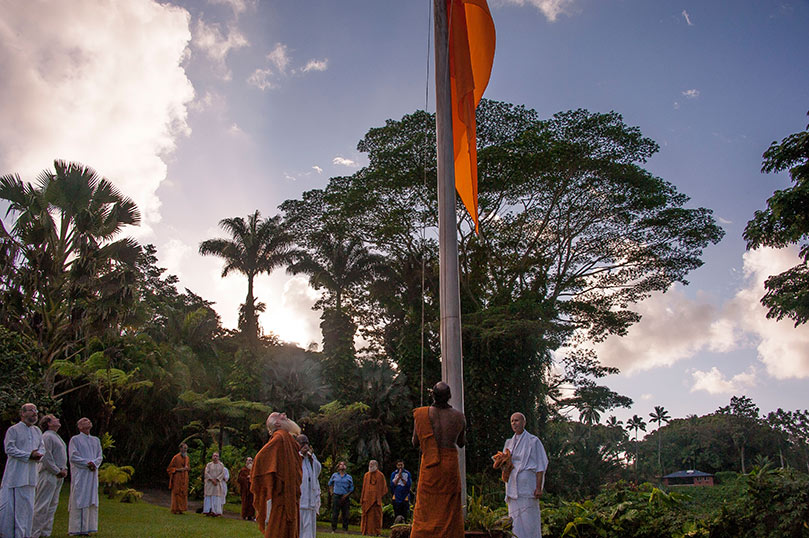 Today is the beginning of not only a new phase, but a new season. This is the first phase after the monk's two-week Sadhu Paksha retreat. It will be a six days and tonight two of our swamis will arrive back from the east coast. On Sun 3 the monastery observes Kadavul Ardra Abhishekam. Following this morning's homa, everyone paraded to the flagpole to raise the colors of the Jivana Ritau.

About the New Season:

Nature
Gurudeva describes this season as a natural time for work, that it is a physical time, a time of exercise and exertion in the physical world, a magnetic time for action and willpower.

The focus is on preserving what has been created, manifesting goals and fulfilling plans made in the past, finishing jobs already started.

It is a natural time for caring for the practical details of the external world including the environment.

Special Sadhanas
There are a number of special sadhanas for the Jivana Ritau.

The main study is the Nandinatha Sutras both at home and at the Mission Satsang. Specifically go through  the sutras as well as review your daily sadhanas looking for the ones that have been neglected or totally ignored. Strive to make improvements in those areas. Bring up to date all vratas and sadhanas in which you have gotten behind.

The  Jivana Ritau is the season we emphasize culture. Thus it is a time for putting more emphasis on teaching the traditional 64 kalas to children, for learning new Natchintanai songs of  Satguru Yogaswami and for improving our Sanskrit puja chants.

It is also the time for honoring those in the vanaprastha asrama including asking them to share their wisdom.

112 Introduction
Beginning with Hindu New Year in mid-April, three seasons of the year divide our activities into three great needs of humankind--the learning of scripture in the first season, Nartana Ritau; the living of culture in the second season, Jivana Ritau; and the meditating on Siva in the third season, Moksha Ritau. Thus we are constantly reminded that our life is Siva's life and our path to Him is through study, sadhana and realization. In ritau one, we teach the philosophy; in ritau two, we teach the culture; and in ritau three, we teach meditation.

117 The Second Season: Jivana Ritau
During Jivana Ritau, the rainy season, from mid-August to mid-December, Living with Siva: Hinduism's Contemporary Culture is the primary text. The key word of this season is work. The colors are rust, copper-maroon and all shades of red--rust for earthy preservation, copper-maroon for fulfillment and red for physical energy. The Aadheenam's 60-foot flag pole flies the rust-colored dhvaja, symbolizing environmental care. Copper-maroon and all shades of red adorn our smaller flags. This is the season of honoring and showing appreciation for those in the vanaprastha ashrama, life's elder advisor stage. The focus is on preserving what has been created, manifesting goals and fulfilling plans made in the past. Inwardly the emphasis is on direct cognition and caring for the practical details of the external world. Practicality is a word much used this season. In the monasteries and the missions, there is a big push on studying the sutras of Living with Siva and these Saiva Dharma Shastras. The format of the mission satsanga changes into one that in fact helps everyone live and breathe with Lord Siva through personal adjustment to the aphorisms of Living with Siva, which define tradition, culture and protocol. Gurukulams are established or renewed to teach the 64 kalas for boys and girls. All work hard to perfect and strengthen Saivite culture in the life of each member. Kulamatas, grihinis and their daughters should think ahead and make plans to send talented children to dancing, singing and art schools for special courses, and ponder ways to make this possible through scholarships and special funds. It is a time of building and repairing and caring for what has been built, planted or created in any realm of life. It is a physical time, of exercise and exertion in the Bhuloka, a magnetic time for action and willpower, of finishing all jobs started since the first ritau. On the farm, there is harvesting of the land's fruits as we celebrate abundance. In the missions during Jivana Ritau, the shishyas can form tirukuttams, and thereby visit students' homes, see how they live and meet their families.

This entry was posted on Monday, August 18, 2014 at 12:50 pm and is filed under Monastery. You can follow any responses to this entry through the RSS 2.0 feed. You can skip to the end and leave a response. Pinging is currently not allowed.

One Response to “Beginning a New Ritau”