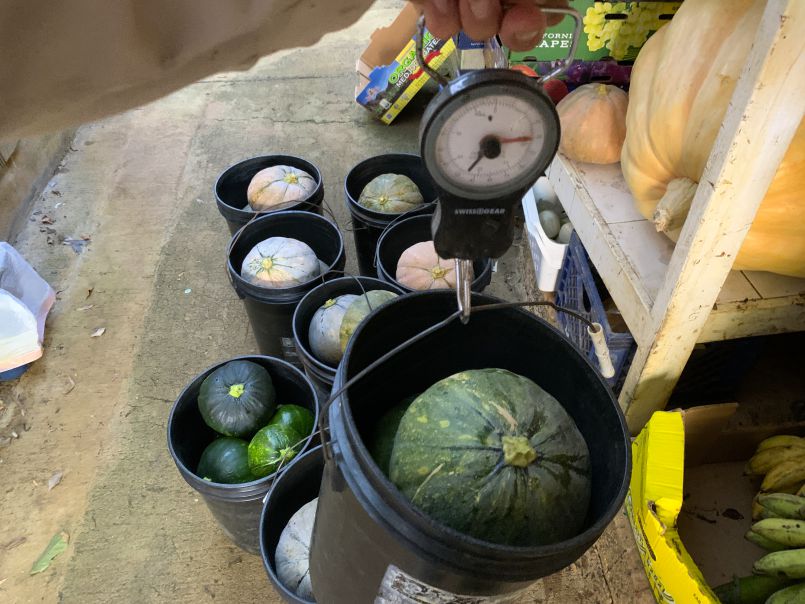 The Siddhidata Kulam reports that on June 9th we planted two Atlantic Pumpkin vines and 2 local pumpkin vines ( Japanese Variety). They were harvested a few days ago. The single Atlantic pumpkin on the cart transport is 120 lbs. This variety is usually grown for size competition in state fairs. The local pumpkin produced 211 lbs from about 33 pumpkins.

This entry was posted on Saturday, October 1, 2022 at 11:07 am and is filed under Farming, Kauai, Monastery, Self-Sufficiency. You can follow any responses to this entry through the RSS 2.0 feed. You can leave a response, or trackback from your own site. 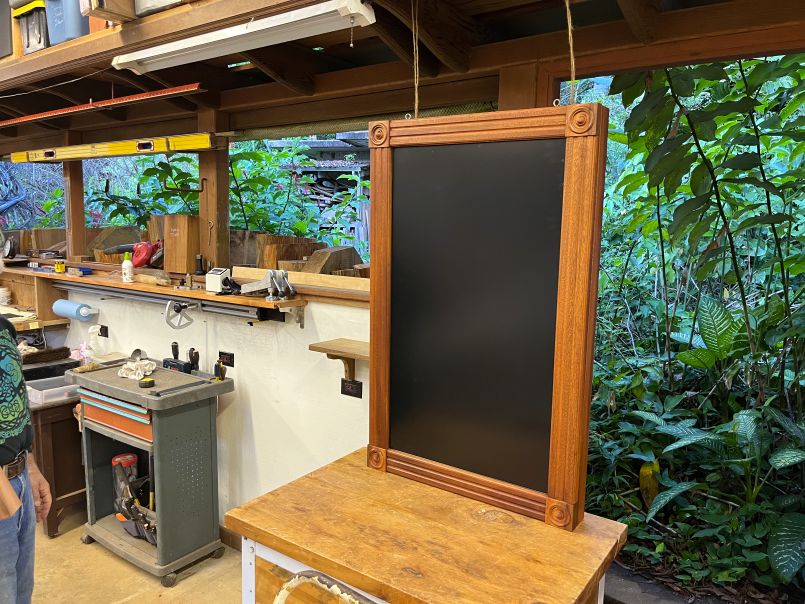 Happy Chitra Nakshatra! After 22 years, we have replaced the trusty, conventional lightbox that has displayed Gurudeva's photos at his shrine in Kadavul Temple. The technology was old school. Each month a monk stepped up on the shrine, opened the box, pulled out the plexiglass sandwich and inserted a new transparency. The new box houses a high grade digital screen that will rotate through many high quality images every three hours, while drawing a similar amount of power as the old unit. Kumarnathaswami and Kanda Alahan teamed up on the project. It was Kanda and his sons who had built the original version in their California cabinet shop.

This entry was posted on Tuesday, September 27, 2022 at 9:19 am and is filed under Gurudeva, Monastery. You can follow any responses to this entry through the RSS 2.0 feed. You can leave a response, or trackback from your own site. 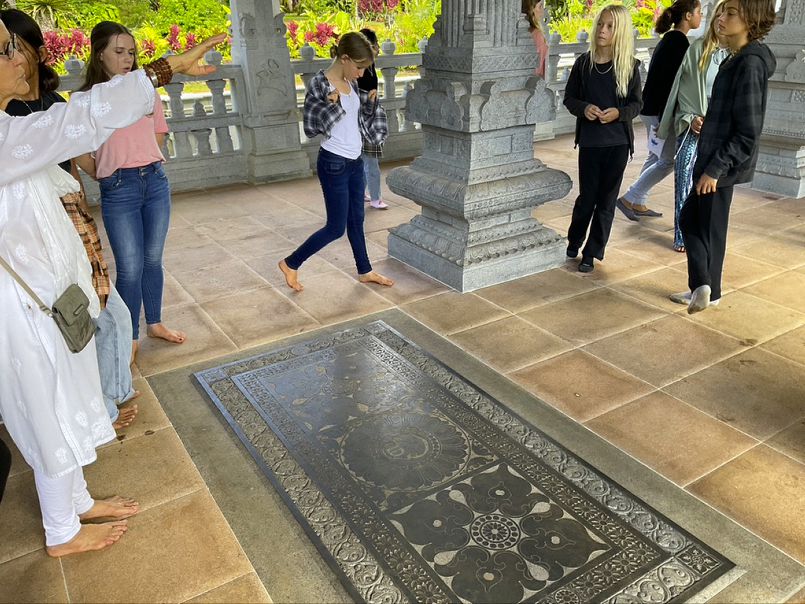 Island School is a private school on Kauai, and the social studies classes have taken a field trip here almost annually during the period of the year when they study world religions. The teachers say the students always enjoy their visit here because it's so different from anywhere else on the island. Pat Gegen is the teacher who brought the students this time. He said, "I really enjoy bringing the students because they are so amazed and it interests them - they leave with a much better understanding and a greater appreciation for the Hindu world." Here are some photos of the group visit a few days ago.

This entry was posted on Tuesday, September 20, 2022 at 5:14 pm and is filed under Monastery, Temples. You can follow any responses to this entry through the RSS 2.0 feed. You can leave a response, or trackback from your own site.

A few days ago we posted about the Bala Alaya events to transfer energy from Kadavul Temple Nandi, Balipeedam and Dhvajastambha flagpole to a miniature wood replica so that craftsmen can soon do upgrade stone work around the bases. Here we present photos of the final event when the shakti was transferred from the kumbha pots into the replicas, just after the priests, Satguru and monks paraded all the kumbhas from the yagasala in Banyan Mandapam into Kadavul Temple in front of the Iraivan Sivalingam.
The shakti is contained in the water inside the kumbha pot, so a small amount of water from each kumbha was poured over each replica accompanied by powerful chanting, followed by decoration, dhupa, deepa, naivedyam. Toward the end, the priests chanted selections from all four Vedas, as is traditional at an event like this. Finally, they honored Satguru and he gave them the traditional tray of gifts and dakshina for their efforts.

This entry was posted on Monday, September 19, 2022 at 4:50 pm and is filed under Festivals, Monastery, Temples. You can follow any responses to this entry through the RSS 2.0 feed. You can leave a response, or trackback from your own site. 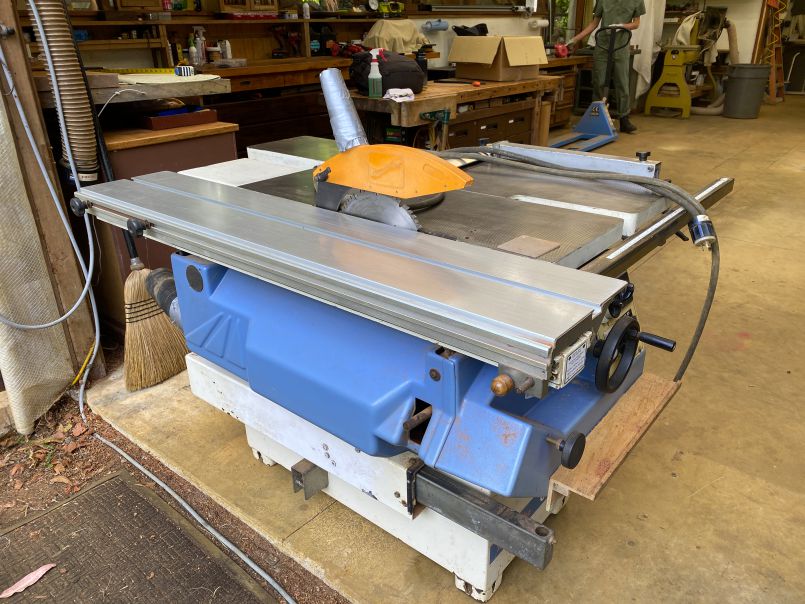 Over the past four years, we have been saving and planning for three new large tools for the woodshop: a wide belt sander, a 20" wide jointer and a combination saw/shaper. Recently the last of three tools arrived: the SCM Minimax ST 5SE Saw/Shaper. In this post, we show a few photos of the installation and of the blessing that was held to inaugurate the trio of tools.

This entry was posted on Saturday, September 17, 2022 at 9:59 am and is filed under Monastery. You can follow any responses to this entry through the RSS 2.0 feed. You can leave a response, or trackback from your own site. 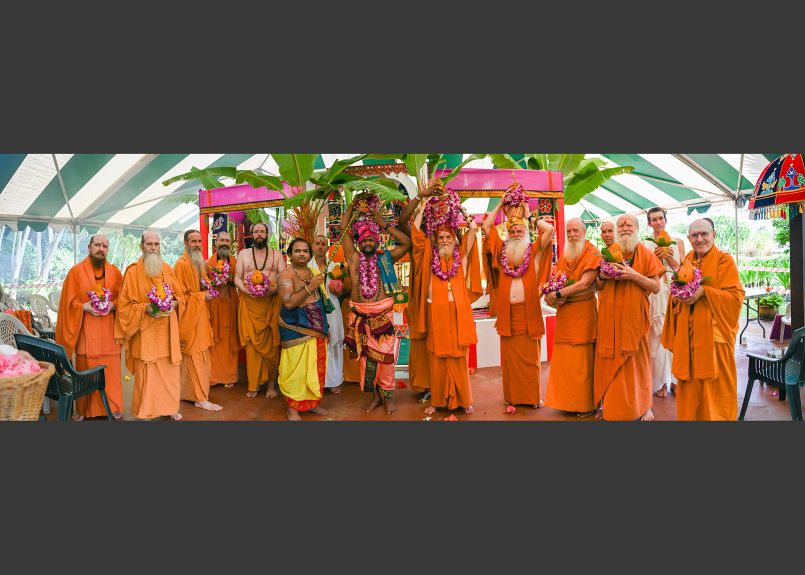 Big News! As you may know, soon we will be adding the granite cladding to the bases of the Nandi Mandapam, Bali Pitham and Kodimaram (golden flagpole) in front of Kadavul Temple. This however, requires an important ritual, as is done for any construction that is to take place on an established temple. Beginning on the 11th, priests Kumar Gurukkal and Arul Vishvanathan performed a powerful ceremony which transfers energy out of the temple's Kodimaram, Bali Pitam and Nandi into a bala (small) shrine. This shrine is placed in Kadavul Temple, and mystically serves as these structures for the duration of construction and repairs. The event occurred in two parts over two days. The energies are transferred into kumbha's (water pots) and later from those pots they are transferred to the bala shrine. During the event various pujas occurred around the temple but a majority happened within the yagasala—a temporary structure for housing energies from the temple. The very first ceremony in Kadavul was a traditional puja which gives the priests permission to become temporary proxies for Satguru. As in the Agamas, the elaborate performance of these rituals is performed by the guru himself. They also asked the Kadavul Temple deities for permission to begin. Without this permission the remaining ceremonies would not be fruitful. The next homa was in front of the temple's kodimaram and as soon as it began, unusually heavy rains poured until the moment that it was complete. Perhaps we should warn our neighbors next time. Next, through various pujas and homas the power was transferred out of the large stone Nandi in front of the temple and into Kumbhas. The following day the kumbhas were paraded by Satguru and the monks from the yagasala into Kadavul Temple. There they were used to transfer the power to the bala shrine. This fig wood replica of all three structures now sits in Kadavul in front of the Crystal Lingam and all rites that would normally happen around Nandi are done to the replica instead. Now the silpis can work on Nandi's base without disturbing Kadavul's energies.

Take a moment with each photo experiencing the event as if you were here with us!

This entry was posted on Friday, September 16, 2022 at 5:23 pm and is filed under Festivals, Monastery. You can follow any responses to this entry through the RSS 2.0 feed. You can leave a response, or trackback from your own site. 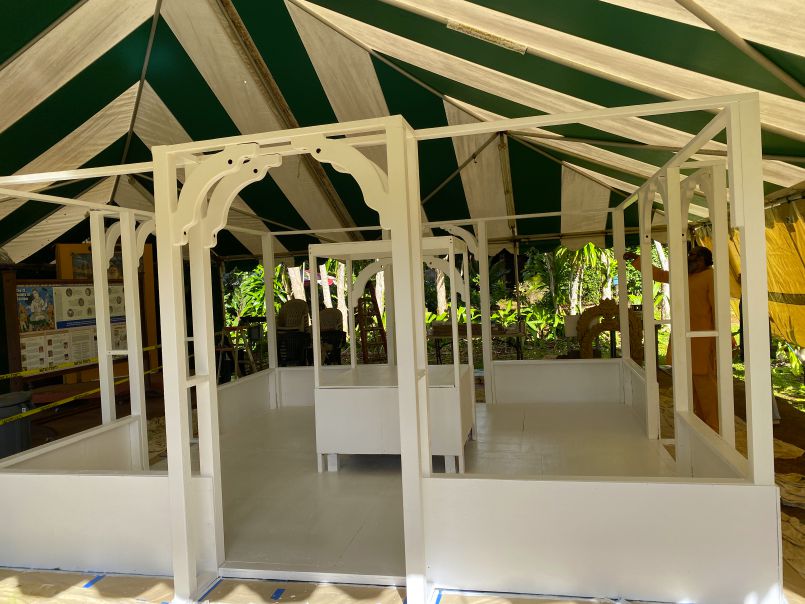 We are getting ready to attach granite ornamentation to the base of the Kadavul Nandi and adjacent flagpole. In order to do this work, the shakti needs to be removed and stored temporarily in kumbhas through a special homa/puja. The Agamas prescribe a yagasala structure to contain the shakti until the work is done and we are ready to reactivate the area. Priests are being flown in to perform the pujas on Sept 11 and 12. Here are some photos of progress in the yagasala construction by the Siddhidata Kulam in our Banyan Mandapam. The kumbhas will be stored in the central platform. In the last photo they are preparing to paint red stripes.

This entry was posted on Wednesday, September 7, 2022 at 10:00 am and is filed under Construction, Monastery, Temples. You can follow any responses to this entry through the RSS 2.0 feed. You can leave a response, or trackback from your own site. 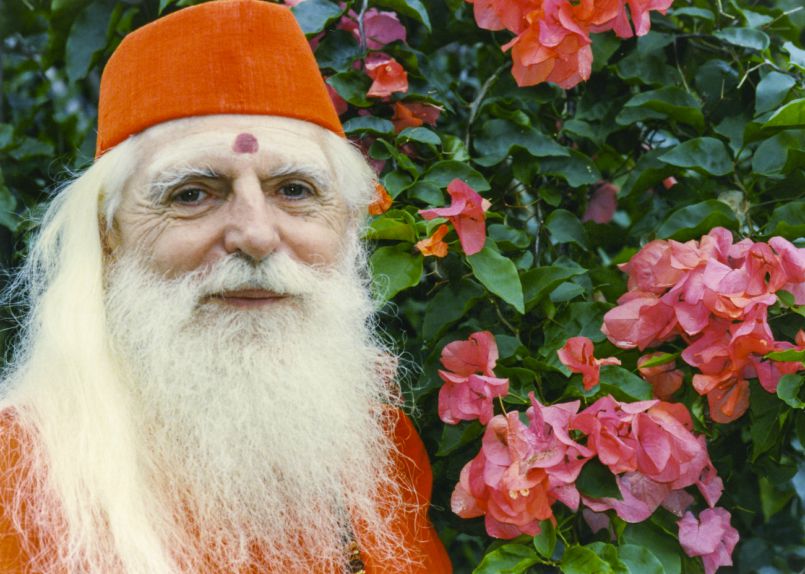 Jai Gurudeva! Our monthly padapuja to Sivaya Subramuniyaswami was performed at Kadavul temple we hope you enjoy the photos we took as well as some curated photos of Gurudeva from our collection. Take a quiet minute to absorb the darshan. "We are all dancing with Śiva, and He with us. Ultimately, we are Śiva dancing." - Gurudeva

This entry was posted on Thursday, September 1, 2022 at 4:32 pm and is filed under Gurudeva, Monastery. You can follow any responses to this entry through the RSS 2.0 feed. You can leave a response, or trackback from your own site. 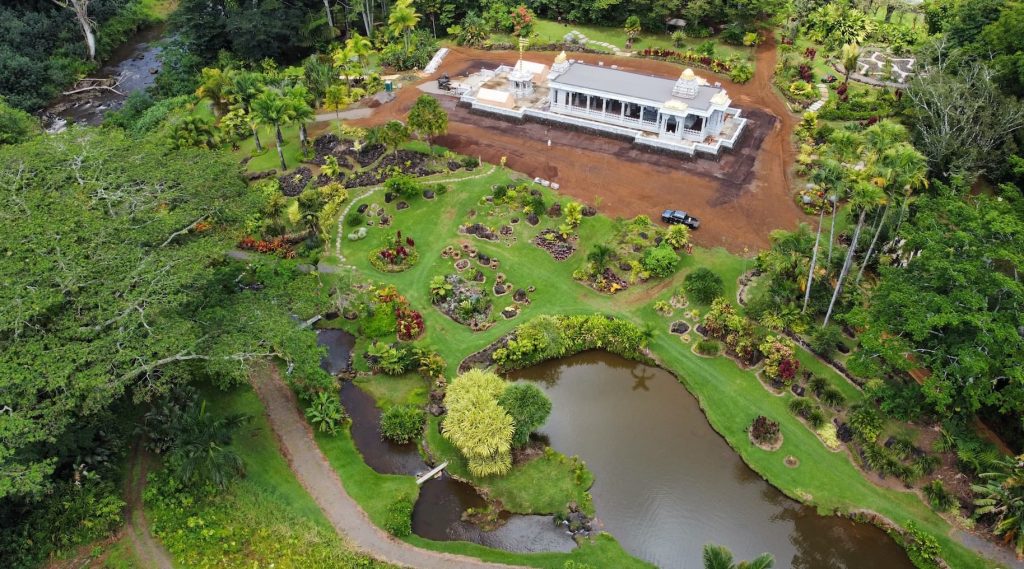 Recently work has begun on the landscaping immediately surrounding Iraivan Temple's foundation. For the most part this means preparing the ground for the hardy grasses that will surround the temple. In other areas, the landscaping is growing in lush and full. Below we present to you some aerial footage of the plants and streams along Rishi Valley, to the west of the temple.

"God is with us always, even when we are unaware of that holy presence. He is His creation. It is an extension of Himself; and God is never apart from it nor limited by it." - Gurudeva

This entry was posted on Tuesday, August 30, 2022 at 9:00 am and is filed under Monastery, Sacred Gardens, Temples. You can follow any responses to this entry through the RSS 2.0 feed. You can leave a response, or trackback from your own site. 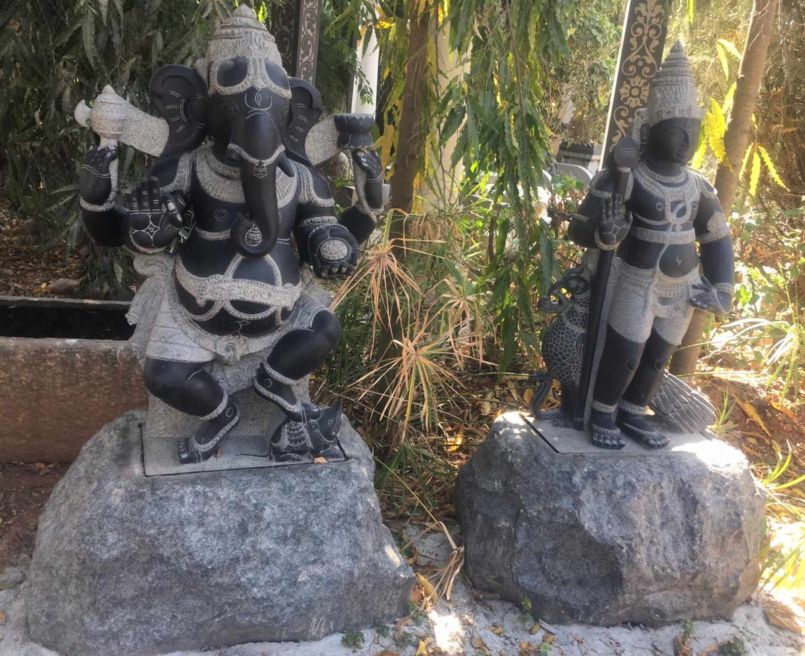 Many years ago a family commissioned these black granite murtis for placing outside their home. Years later plans changed and they no longer needed the murtis, deciding to donate them to our monastery. In discussing where these murtis could call home--at least for the time being--we noted than many general visitors stop by during our closed hours, so enriching the experience at our very front entrance (outside the gate) was felt to be most appropriate. A granite Sivalingam is already there, so now Ganesha and Murugan join Siva. A couple weeks ago when SSC sishya Gaurav and Ripla Malhotra family was here on pilgrimage, they and two Pillaiyar Kulam construction crew, Raymond and Kawika, helped to installed the two Deities.

This entry was posted on Sunday, August 28, 2022 at 10:54 am and is filed under Kauai, Monastery, Sacred Gardens, Saiva Siddhanta Church. You can follow any responses to this entry through the RSS 2.0 feed. You can leave a response, or trackback from your own site.