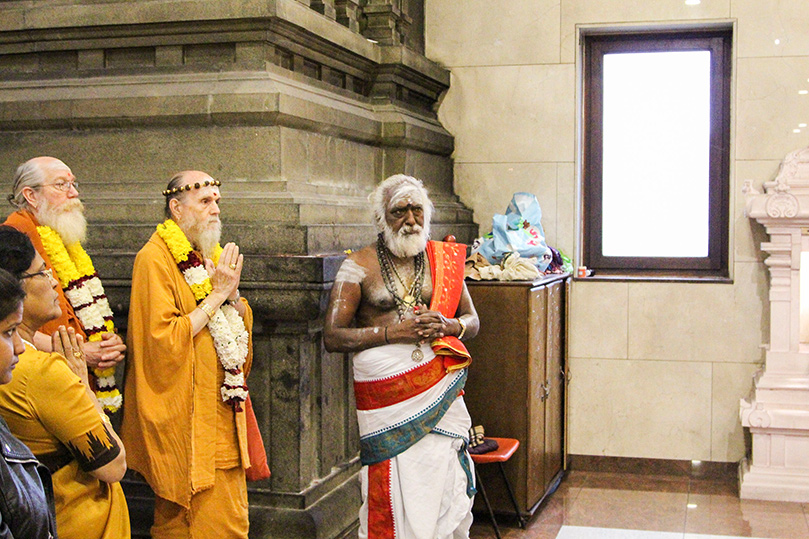 Following Satguru's 10am satsang at the Veergathiyar's home, He and Sannyasin Shanmuganathaswami began their evening at the Sri Murugan Temple in East Ham. Satguru was happy to see Pichai Gurukal there who was on his way to the Maryland Murugan Temple kumbhabhishekam. He has seven of his students at this temple as priests. After arati, Satguru gave a talk about the importance of temples, with Mrs. Santhirapala translating in Tamil. Satguru then visited the Saiva Munnetra Sangam where the priest did a long and beautiful puja to their Deities, which are the same as at Chidambaram: Nataraja, Ambal and Rahasiyam. Satguru gave a spontaneous upadesha to end the evening. Om Namah Sivaya

An excerpt from Satguru's talk on temples:

The first of the three worlds is the physical world called the Bhuloka. The second is the astral world called the Antarloka. It is where we reside in between physical births. The third world is the Sivaloka and is where God Siva, Deities such as Lord Ganesha and Murugan and great souls who have achieved moksha reside.

The purpose of the puja is to create an inner link with the Sivaloka which allows the Deity being worshipped to reside temporarily in the murti. Ajita Agama has a simple description of this process: “Siva lingam puja is for the purpose of invoking the presence of Sadasiva in the lingam.”

My guru, Sivaya Subramuniyaswami gave this description of murti worship: “We worship God Siva and the Gods who by their infinite powers spiritually hover over and indwell the image, or murti which we revere as their temporary body. We commune with them through the ritual act of puja.”

This entry was posted on Friday, July 1, 2016 at 1:29 pm and is filed under Bodhinatha, Travel Missions. You can follow any responses to this entry through the RSS 2.0 feed. You can skip to the end and leave a response. Pinging is currently not allowed.

One Response to “Satguru in London – June 29th”