Selvanathan Sthapati, chief architect of Iraivan Temple, arrives on island to begin another phase of our ongoing grand granite project.
Below are some photos from Sthapati’s past, and ours:

Selvanathan Sthapati’s grandfather and father of Ganapati Sthapati–late Vaidyanatha Sthapati with Ramana Maharishi in 1949. This photo was just recently presented to him. The story goes that the grandfather had finished some work he had been commissioned for and reported to Maharishi that he was “done.” Maharishi told him he was not done and there was much more work for him to do. 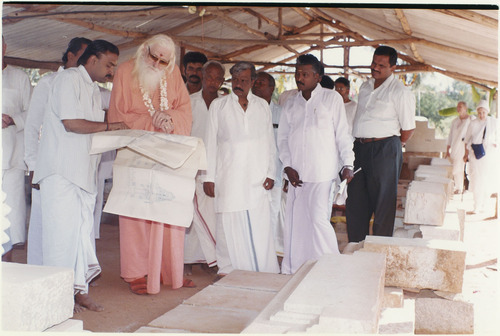 Gurudeva reviewing plans for Iraivan Temple with Selvanathan Sthapati at the carving site in Bangalore.

This entry was posted on Wednesday, April 11, 2018 at 8:04 pm and is filed under Construction. You can follow any responses to this entry through the RSS 2.0 feed. You can leave a response, or trackback from your own site.

3 Responses to “Arrival of Selvanathan Sthapati”