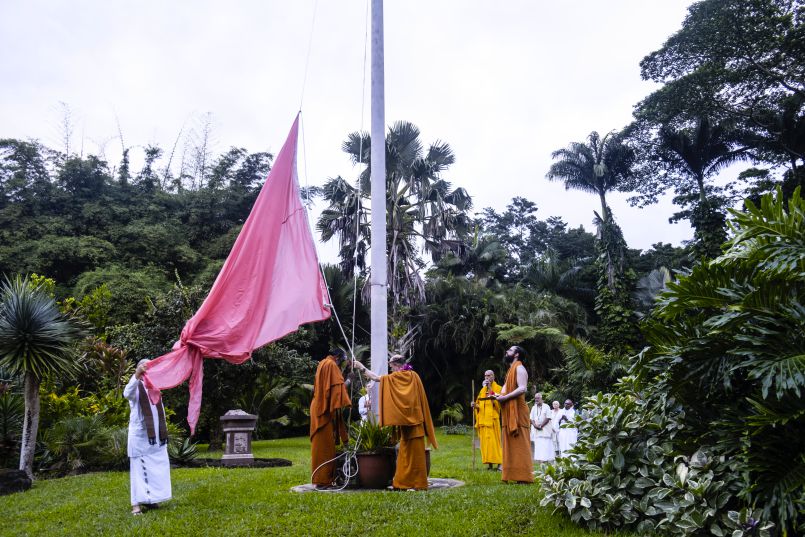 With our observance of Sadhu Paksha having come to a close, we start our new phase with a homa and with a parade out to change the flag and have arati at Iraivan Temple. Here are reminders from Gurudeva, from his Saiva Dharma Shastras, detailing the significance and sadhanas of this inner season.

112 Introduction
Beginning with Hindu New Year in mid-April, three seasons of the year divide our activities into three great needs of humankind--the learning of scripture in the first season, Nartana Ritau; the living of culture in the second season, Jivana Ritau; and the meditating on Siva in the third season, Moksha Ritau. Thus we are constantly reminded that our life is Siva's life and our path to Him is through study, sadhana and realization. In ritau one, we teach the philosophy; in ritau two, we teach the culture; and in ritau three, we teach meditation.

120 The Third Season: Moksha Ritau
The third period of the year, Moksha Ritau, the cool season, is from mid-December to mid-April. It is the season of dissolution. The key word is resolution. Merging with Siva: Hinduism's Contemporary Metaphysics is the focus of study and intense investigation. The colors of this season are coral-pink, silver and all shades of blue and purple--coral for the Self within, silver and blue for illumination, and purple for enlightened wisdom. High above flies the coral flag, signaling Parasiva, Absolute Reality, beyond time, form and space. Moksha Ritau is a time of appreciation, of gratitude for all that life has given, and a time of honoring elders, those in the sannyasa stage of life. Moksha Ritau is excellent for philosophical discussions, voicing one's understanding of the path through an enlightened intellect. In finance, it is the time for yearly accounting and reconciliation. On a mundane level it is a time of clearing attics, basements, garages, sheds, warehouses, workshops and desks, getting rid of unneeded things, of pruning trees, of streamlining life on the physical plane--of reengineering.


This entry was posted on Monday, December 17, 2018 at 10:44 am and is filed under Monastery. You can follow any responses to this entry through the RSS 2.0 feed. You can leave a response, or trackback from your own site.

2 Responses to “Ushering in the Moksha Ritau”