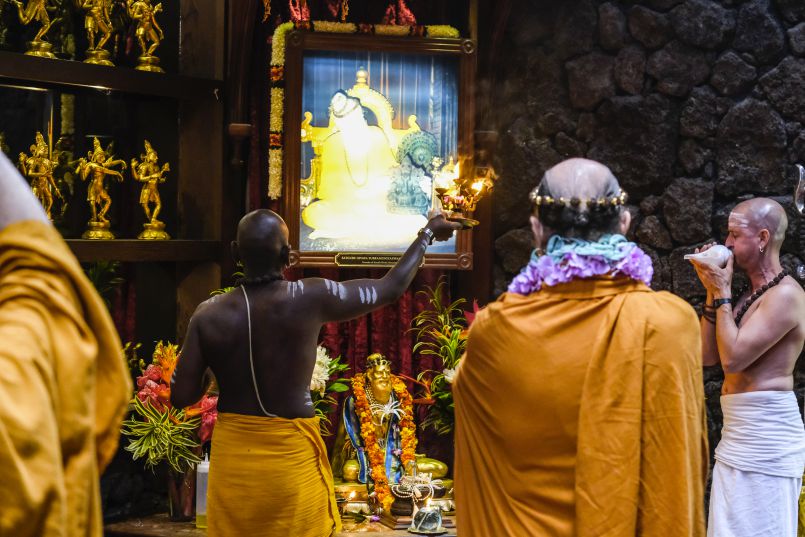 This morning the aadheenam celebrated our monthly padapuja to Gurudeva during the chitra nakshatra. Yogi Dayanatha and Nirvani Tejadevanatha performed the abhishekam, with Satguru Bodhinatha Veylanswami, our monks and local members in attendance.

"In fact, this Self is so subtle as to be hidden from all but the most awakened. How can it remain so unknown? Simplicity is the answer. The Self is so simple, so uncomplicated, that the ramified external mind overlooks it. From birth to death and back to birth, we live in the ocean of Being and see only the fishes of objective perception. We neglect to notice that these swim in the ocean of Being. When man comes to a point, as he must, when the things of this world possess less attraction for him than the path toward merging with Siva, then only will he begin to detach himself enough to see the obvious, the Ocean of Sivaness that lies on every side, inside, outside, above and below. Then only will the merging we speak of here become meaningful to him. Then only will he be able to simplify his life and his thinking, his very perceptions, his hour-to-hour way of looking at things, enough to quiet the mind, for this Self can only be known in a quieted consciousness. Not even a thought can remain. Not a feeling. Not a hope or a question. One must be very pure for this realization to come, very pure indeed. The Self reveals itself, by the satguru's unique grace, to a mind that has, in a mystical but very pragmatic manner, eliminated itself. 'You must die before you die,' my satguru, Siva Yogaswami, said. That is all that needs to be said."Merging With Siva

This entry was posted on Wednesday, June 12, 2019 at 12:04 pm and is filed under Gurudeva. You can follow any responses to this entry through the RSS 2.0 feed. You can leave a response, or trackback from your own site.