All About the Monastery 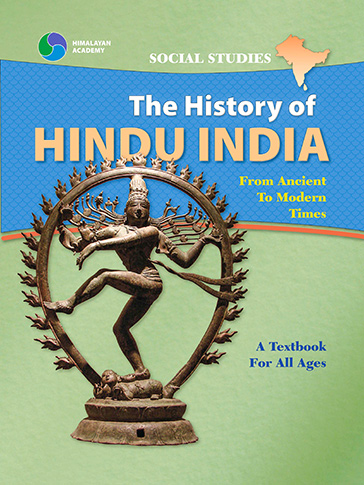 In response to a global lack of authentic material to teach Indian history and Hinduism to youth, the staff of Hinduism Today magazine, in collaboration with renowned historian Professor Shiva Bajpai, produced The History of Hindu India in 2011. This 128-page illustrated account of Indian history and religion from ancient to modern times was written for middle-school students but is also used for high-school world religions courses, advanced placement classes and even in college. The book begins with the threads of Hindu practice evident in the Indus-Sarasvati civilization, the largest and in many ways the most advanced of the world’s ancient cultures. From there it traces the development of Hinduism through India’s early empires, a time of great advances in science, architecture, art and literature. It documents the centuries of trial by foreign invaders, followed by British colonization and, finally, the era of independence. Throughout these periods, the book highlights the people, philosophical ideas and religious practices that are key to understanding the Hindu religion today. All five of the book’s chapters have been produced as 15 to 20-minute documentaries available on YouTube. Narrated by Raj Narayan, they are colorful, informative and entertaining presentations of Indian history that appeal to children and adults alike. The first three parts have collectively passed three million hits on YouTube. Subtitles are available in Spanish, French, German, Russian and Tamil. The first video is at bit.ly/history-india-1; links to the others are provided in the description.

Also available at bit.ly/history-india are extensive free resources for teachers and parents, including lesson plans, a list of endorsements by leading scholars and educators and links to various resources on teaching Hinduism in public schools. The history book itself can be downloaded for free in several epub formats.