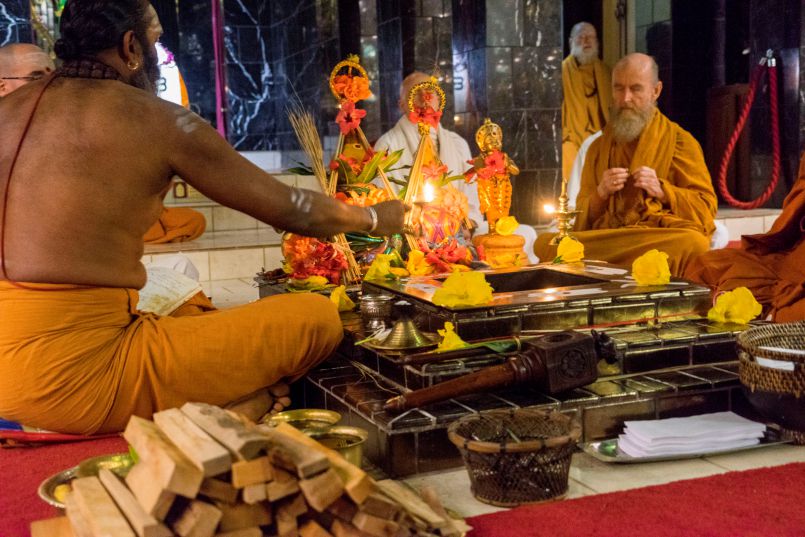 Our Sun 1 homa was a delight indeed. The monks gathered together and chanted Sri Rudram in unison, meditated on the inner skys, offered what we have to Rudra and listened to our satguru speak profoundly on fulfilling dharma, resolving karma and realizing the Self.

But recently we had to remember what was learned and forgotten, and that is the story of our svayambhu sphatika Sivalingam sitting in Kadavul Temple.

One day, in an early-morning vision in his private quarters, Guru deva saw
the future, as he would later say. In fact, he often said, if you want to know
what you should do, do this: In your mind, travel into the future, and from
there look back and witness what happened. The present-day decision
will be obvious.

In this vision of the yet-to-be, Guru deva saw a massive crystal Sivalingam
shining brightly in the sanctum of Iraivan Temple, radiating out to
the world. It was a titan among crystals. In fact, it seemed in this first seeing
impossibly large, fantastical and beyond reality. Perhaps, he thought,
it is merely the spiritual form of the Sivalingam and not the physical one.

Downstairs a few hours later, he shared this vision with the monks,
letting them know he had his answer as to which form of Siva that Iraivan
Temple would embody. It would be a crystal Lingam, known in Sanskrit
as sphatika Sivalingam. In the ancient texts it is said that a Lingam, which
is the aniconic form of the Creator-Preserver-Destroyer of the universe,
is the highest of worshipful icons. It represents That which is beyond
representation, beyond form and even imagination. It is the All in all, the
Self beyond time, form, space and cause.

The Agamas say one can worship this Great God Siva in the form of a
Lingam made of mud or sand, of cow dung or wood, of bronze or black
granite stone. But the purest and most sought-after form is the quartz
crystal, a natural stone not carved by man but made by nature, gathered
molecule by molecule over hundreds, thousands or millions of years, grown as a living body grows, but infinitely more slowly. Such a creation of nature is itself a miracle worthy of worship.

The monks were delighted to hear of their guru's revelation and imagined
the meanings behind it. Kadavul Temple already housed God Siva as
Nataraja, the divine dancer who creates and inhabits every atom of the
cosmos, and Iraivan Temple would host Siva as the transcendent Beyond,
immanent and transcendent, form and formless. It was perfect. But the
monks were not at all prepared for what would happen next.

Gurudeva paid a visit the next day to the Crystal Journey shop at Kilohana
on Kauai. He was there looking at the wares, asking the proprietor
about crystals, looking for a large one he had visualized. She did not have
such a crystal, but eagerly shared her own similar vision of a giant crystal.
Some weeks later, she called requesting to meet with Guru deva, arriving
at the monastery mid morning. She was a kind of mythical character, a
child of the 70s, a cherubic, intelligent lady about 40 years old. In her long
dress, looking a bit Roma, her round cheeks pink with the pleasure of her
visit, she shared that she had an important message for him. She was taken
to Guru deva's offi ce, where he listened to her tale. "Guru deva, I had a
dream last night. In my dream I saw, even more clearly than before, a giant
crystal. Very tall and perfectly formed, just like the one you described. Not
only that, I saw where it is. If you will allow me, I want to go there. I want
to find the crystal and bring it to you. Will you buy me a ticket?"

Never in his life had Guru deva bought a ticket for a near stranger on a
dream-induced mission. But this was different. Guru deva then told the
visitor of his own dream that same morning, of how he had seen the giant
crystal, too, but never imagined someone else might have the same dream
at nearly the same time. He took it as a sign, and did the unthinkable--
bought her a round-trip ticket to Arkansas, the Natural State.

Soon she was on a crystal quest. Having never visited Arkansas, she
took the logical course and began visiting the various mines in the area.
Along with Brazil, Arkansas is the world's most productive crystal source,
and there were dozens of mines to be tracked down at the end of long,
unpaved roads.

Ultimately she found the crystal at the mines of one James Coleman, a
hard-scrabble man dressed in denim with a scrappy beard and callused
hands, whose father and grandfather had mined crystals and who knew
the business like none other.

Ambling to his Jeep, the taciturn miner motioned to her to get in. Off
the two drove, about a mile on a pitted coral path some called a road that
ended at an old wooden warehouse. Getting down, Coleman walked through the double doors and headed to the back of the open space, stopping at a pallet in a dark corner. On it was a musty mattress, worn and
worthless, rolled in a circle and tied with a hemp rope...

This entry was posted on Saturday, January 7, 2017 at 7:51 pm and is filed under Bodhinatha, Monastery, Temples. You can follow any responses to this entry through the RSS 2.0 feed. You can skip to the end and leave a response. Pinging is currently not allowed.

14 Responses to “A Clear Crystal Vision: The Story of Iraivan's Lingam”