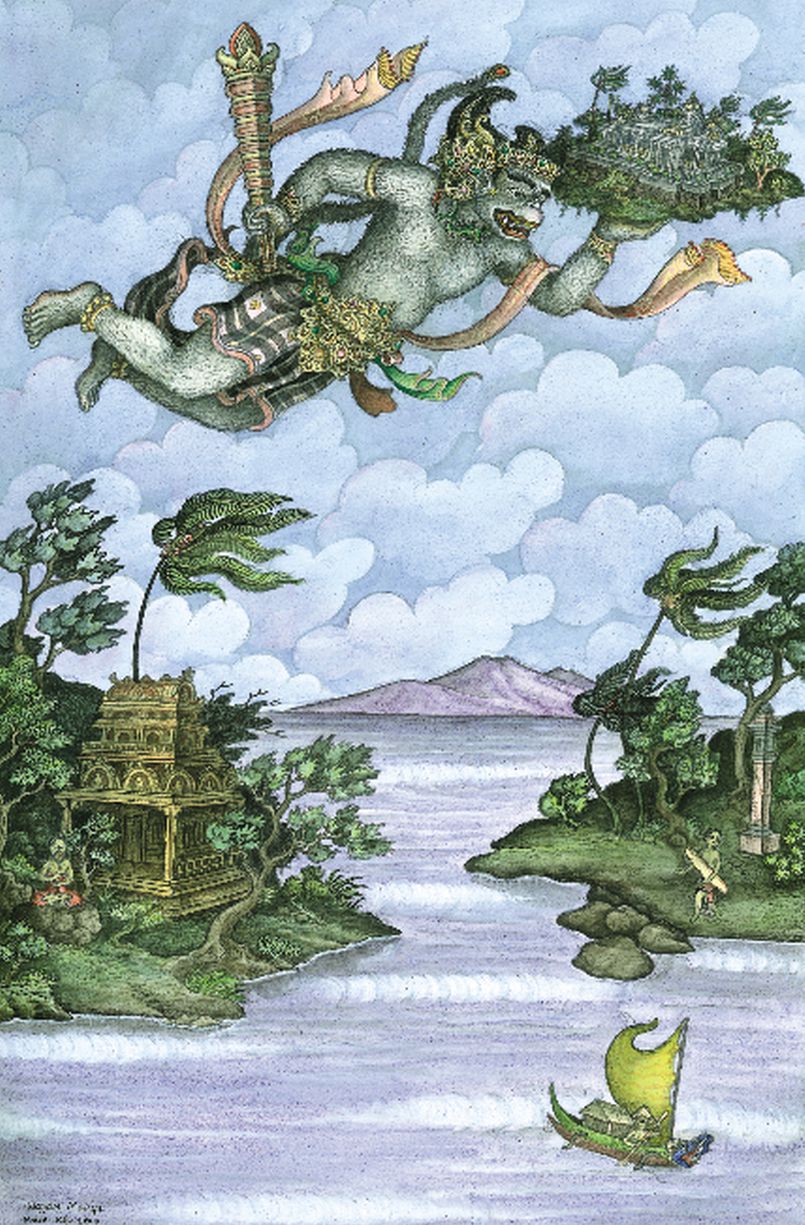 We begin today a series of eleven Hanuman Tails, opps, Tales. It's a fascinating story which will unfold slowly in the days ahead.

We begin with Gurudeva's vision of Hanuman, wherein he saw the God as powerful, overwhelmingly so, inhumanly so, divinely so. Thus it was that Gurudeva set in motion having a massive granite stone sculpture made of Lord Hanuman. His instructions were clear: make Him noble and muscular. He must look powerful, strong.

In Hanuman's left hand, held aloft, Gurudeva asked for a small Iraivan Temple. Just as Hanuman brought the healing mountain from the Himalayas to Sri Lanka (see the story at the end of this TAKA), so He would bring Iraivan from India to Kauai. When future generations ask, "How on earth did an Agamic, hand-carved granite Chola-style Siva temple ever end up on this remote island?" we would smile and say, "Hanuman brought it here."

After he departed to his light-filled world, the monks went to work to fulfill Gurudeva's vision. The Doshi family from California, Tushar and Alka, came forward to sponsor it. They are avid devotees of Lord Hanuman and after their visit to Kauai, they wanted to bring Lord Hanuman to the island.

Jiva Rajasankar and his two sons undertook to commission the 13-foot-tall piece at a patarai south of Chennai. Years later it was moved to our worksite in Bengaluru. But Jiva was unhappy with the refinements of the carving and set our own carvers to work for more years, adding intricate details, especially to the back which the first team of sculptors felt was not that important. They were wrong and Jiva did the hard work of bringing Hanuman up to an amazing standard. In fact, we regard this Hanuman as a true masterpiece, perhaps the most beautiful in the world. In all, it took many man years to make. Finally, in early 2013 Jiva shipped the completed stone, weighing some 15 tons, across the ocean, just as hanuman crossed the sea in his adventures. Here ends Chapter One of our tale.


The Traditional Story from the Ramayana
A battle broke out between Ravana's demon army and Rama's animal army. Lakshman was so badly wounded in the battle it seemed that he would die before sun-rise. (In some versions of the story, many monkeys and bears are wounded too.) The monkeys and bears decided that Hanuman must leap to the Himalayas and bring back the healing herb from the Medicine Mountain to save Lakshman's life. So Hanuman leapt over the ocean, and across the whole of India to the Himalayas.
Arriving in the Himalayas, it took a long time to find the fabled Medicine Mountain. Hanuman found it at last -covered with herbs, but he didn't know which was the magic healing herb. So he wrapped his arms around the whole mountain, pulled it out of the ground and lifted it onto the palms of his hand. He then flew with the mountain back to Lanka. (Hanuman carrying the mountain is reproduced again and again in all forms of art.) On the way the sun began to rise. So Hanuman decided to capture the sun under his arm so that he could arrive back before sunrise in time to save Lakshman. The healing herb was picked and given to Lakshman. Lakshmanwas healed and filled with energy.

This entry was posted on Monday, July 9, 2018 at 1:54 am and is filed under Construction. You can follow any responses to this entry through the RSS 2.0 feed. You can leave a response, or trackback from your own site.

4 Responses to “Hanuman, the Untold Story: CHAPTER ONE”