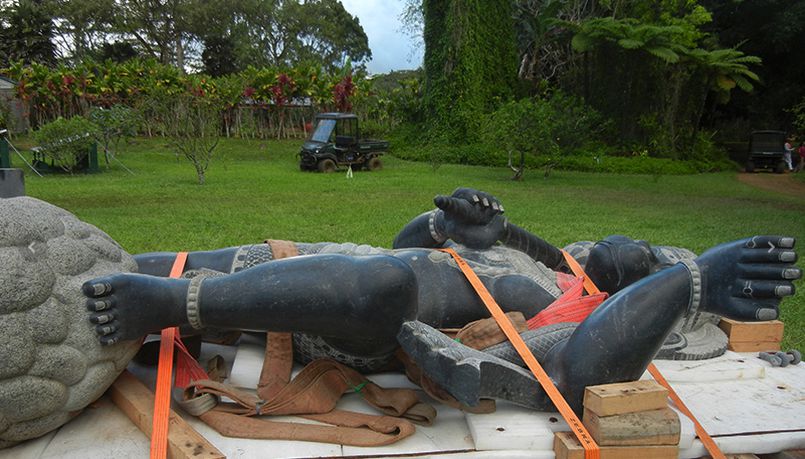 What follows may startle you. We hope not, because it has such a delightful end. As we said in Chapter One, the master carvers of South India spent four years crafting what we regard as the most graceful, powerful, and artistic Hanuman ever made. It was originally sculpted in Mahabalipuram, then shipped to our site in Bengaluru, about 450 kilometers away. Then our team there spent another two years refining it. Finally in 2013 the 13-foot-high Hanuman made his voyage to Kauai where He was displayed for all to see, as we waited for the day of His installation.

One day when the monks were out near Iraivan Temple, where He lay on a massive steel pallet, they saw what appeared to be a crack on his ankle. Looking more closely a far more serious realization came: Hanuman had broken in half (perhaps a micro flaw in the original stone), the lower legs and mountain had been completely severed from the main body.

What happened, we came to know, was that the hard white foam (which you can see in this first photo, had grown soggy over the years of exposure to rain and sun and rain and sun again. The top part of Hanuman's body settled, a mere 1/8th of an inch. But the bottom half, with his feet and the mountain) could not move as they were locked down by the supporting crate. That small movement had broken Hanuman in half.

What happens next proves that all things in life are a boon, if we but react and respond to them with higher consciousness.
Post Views: 367

This entry was posted on Tuesday, July 10, 2018 at 8:04 pm and is filed under Kauai, Monastery. You can follow any responses to this entry through the RSS 2.0 feed. You can leave a response, or trackback from your own site.