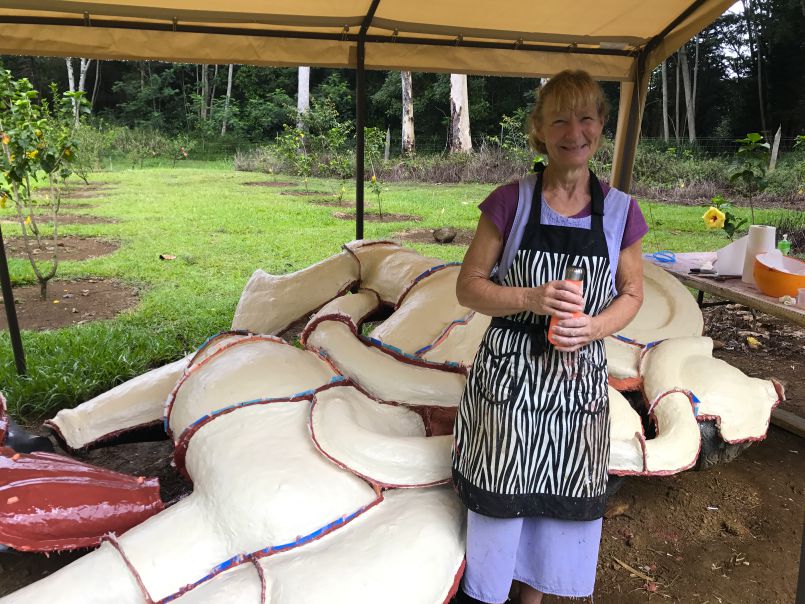 After accepting the astonishing fact that Hanuman had split in half, the senior monks met to determine how to make what seemed like a disaster into a boon, something Gurudeva was always modeling and teaching to us--see Siva's Will in all that happens, the good as well as the bad.


In consultation with the Sivacharyas of Tamil Nadu, the temple sthapati Selvanathan Sthapati and the great Pundit Sabharatnam of Chennai, we devised a plan that would meet Gurudeva's wish.

The plan called for capturing the artistry and darshan of the stone and turning it into bronze. It is revealed that the broken stone is a gift, because the bronze Hanuman that will rise in its place is even more remarkable. The stone Hanuman was quite similar to the stone Dakshinamurthi, both 13 feet tall. Having Dakshinamurthi in granite and Hanuman in bronze makes each one more special. And, bronze will also last for 1,000 years. Plus the bronze will have more delicate details, details that were impossible in the granite sculpting. Holly added refinements impossible to achieve with a hammer and chisel. A masterpiece of this scale, in bronze, will be a marvel far into what Gurudeva liked to call "The future of futures."

We flew the master sculptress Holly Young to the island twice. The first visit Holly molded the granite stone on the front side. In April of 2017 she returned after we had hired a giant crane to turn Hanuman over, so Holly could capture the back side. It's a tedious task, requiring extremely careful work so all the future metal parts will fit right. It also requires much chemical and materials knowledge, layers and layers of painting on various coats of goo and waiting for the layer to dry before the next one goes on.

In all Holly made 65 molds which were sent to Loveland, Colorado to a team that is arguably America's greatest bronze experts. That story in Chapter Five.

This entry was posted on Thursday, July 12, 2018 at 3:38 am and is filed under Construction, Temples. You can follow any responses to this entry through the RSS 2.0 feed. You can leave a response, or trackback from your own site.

2 Responses to “Hanuman Is Reborn in Bronze: CHAPTER FOUR”