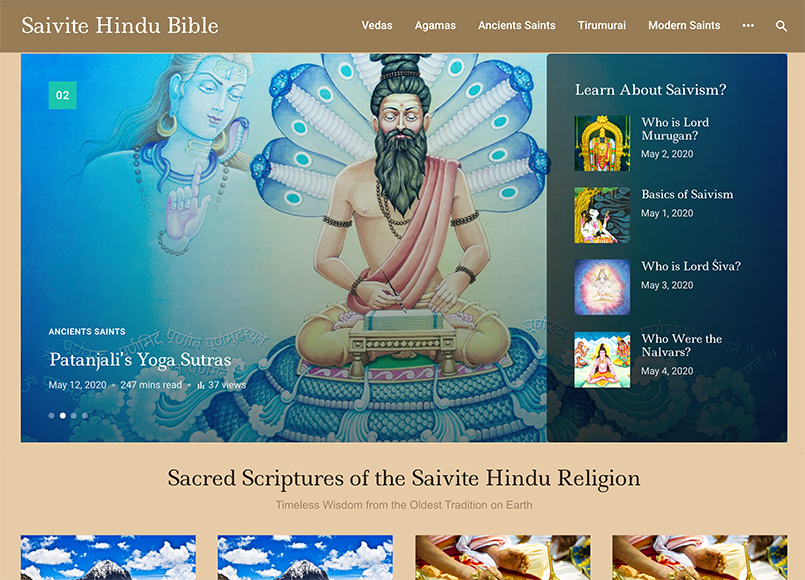 Today we'd like to announce the release of our latest Web App, which works to fulfill one of Gurudeva's long-standing ideas. As Stated in the Nanadinatha Sutras:

"SŪTRA 287: OUR ŚAIVITE HINDU BIBLE
All my devotees revere as scripture The Holy Bible of the Śaivite Hindu Religion—which includes excerpts from the Vedas, the Āgamas, Tirumantiram, Tirumurai and Tirukural—and guide their lives by its wisdom. Aum"

So click here to view the Saivite Hindu Bible. This online anthology of Hindu Scripture includes english translations of some of our most important and profound texts, with more to come! It includes excerpts from the Vedic Hyms, the Upanishads, the Kamika, Raurava, Sarvajnanottara and Mrugendra Agamas, the Sri Nandikesa Kasika, Patanjali's Yoga Sutras, the Tirumurai and more. Dive in and start discovering what your scriptures are really about. Aum.

This entry was posted on Thursday, June 11, 2020 at 3:44 pm and is filed under Publications, Sadhana, Theology. You can follow any responses to this entry through the RSS 2.0 feed. You can leave a response, or trackback from your own site.

10 Responses to “Bringing Forth Our Saivite Scriptures”