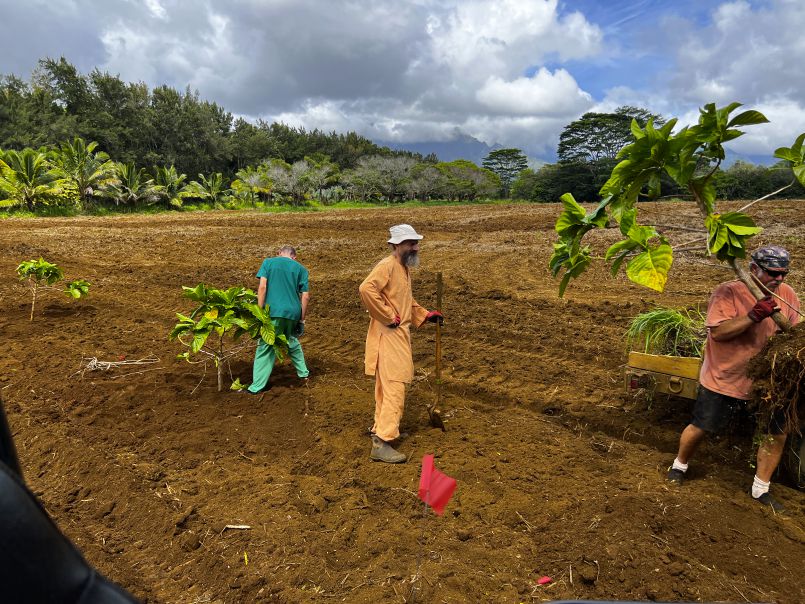 On our agricultural land across the Wailua River, we have a large planting of Noni trees for making our Wailua River Noni Juice. In a previously planted field, several rows of young trees are starting to outgrow their space. It's time for us to remove some and plant them out in a recently prepared field. Acharya Arumuganathaswami, Sannyasins Saravananathaswami and Tillainathaswami, Brahmachari Akash and Doug all joined forces to amend the soil and relocate the new trees. Aum.

This entry was posted on Wednesday, April 27, 2022 at 5:26 pm and is filed under Farming. You can follow any responses to this entry through the RSS 2.0 feed. You can leave a response, or trackback from your own site. 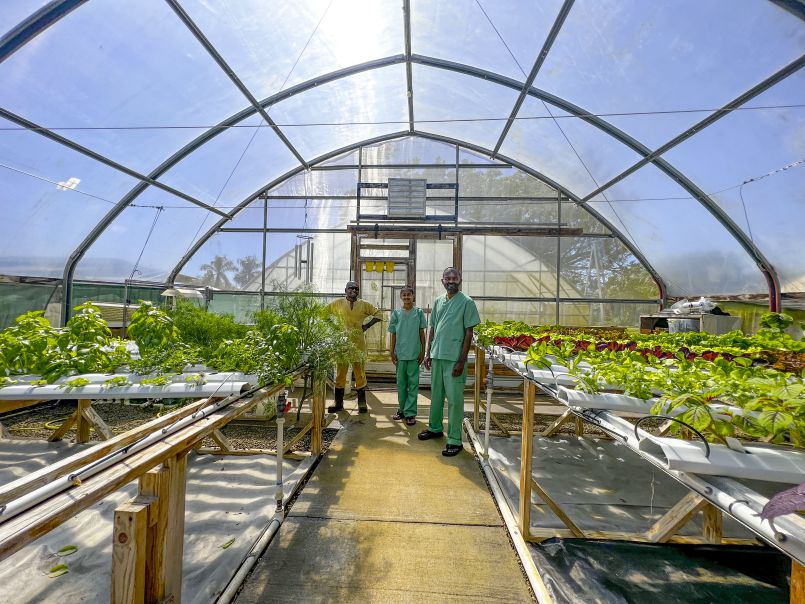 Today our father-and-son taskforce team have been participating in some relaxing work at the greenhouse. Mayuran and Chandipati have been helping Yogi Dayanatha to plant out new channels of baby greens. Each day our monks enjoy the fruits (or veggies, rather) of these labors. A whole tub of greens are cooked down for our lunch greens, be they baby bok choy, swiss chard, red kale, mustard greens, beet green or any of the many others. Om.

This entry was posted on Monday, February 21, 2022 at 4:45 pm and is filed under Farming. You can follow any responses to this entry through the RSS 2.0 feed. You can leave a response, or trackback from your own site. 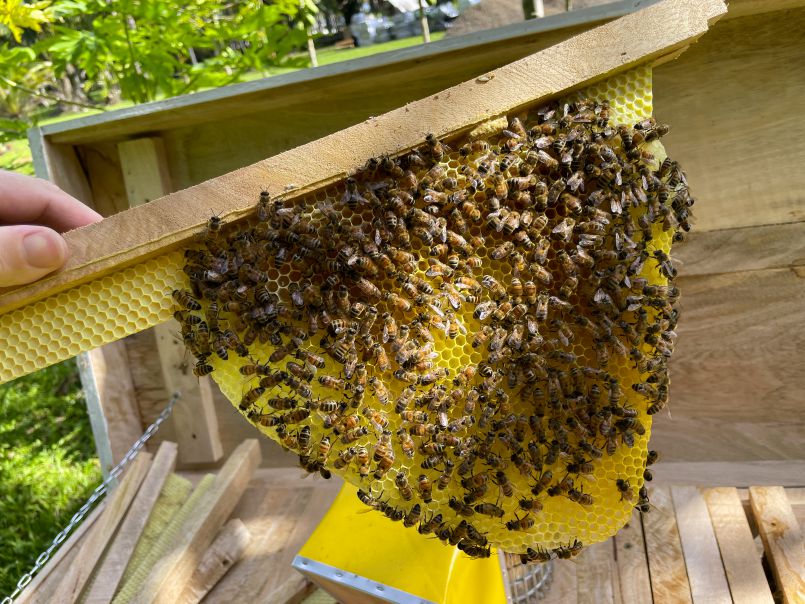 Earlier this year we began construction on a prototype for a kind of beehive known as a horizontal or "topbar" hive. While it's new for us, this is actually a classic style of hive that has long been common throughout much of Eastern Europe and Serbia. Today, it is becoming more popular throughout the world for its ease of use, especially for the non-commercial beekeeper.

Unlike the common Langstroth hive, where heavy bee boxes are stacked to form space for bees, the horizontal hive is a stationary long box. Here, the bees are encouraged to build their comb across more than up, much like they might do in a horizontal log. The top bars are laid down across the space for the bees to build on. There is a follower board so that one can control exactly how much space the bees have at any given time. Too much space and they have trouble regulating the temperature for the their brood, and aren't as able to defend themselves against other insects (like hive beetles) which have the potential to collapse their whole operation.

On one end is the entrance, which the bees build their brood nest near. As they build down the length of the box, further from the nest, they begin to build the further comb purely for honey storage. So all you have to do to harvest some is open up one end of their hive and remove the furthest bar. Aum.

This entry was posted on Wednesday, December 8, 2021 at 6:00 pm and is filed under Farming, Monastery. You can follow any responses to this entry through the RSS 2.0 feed. You can leave a response, or trackback from your own site. 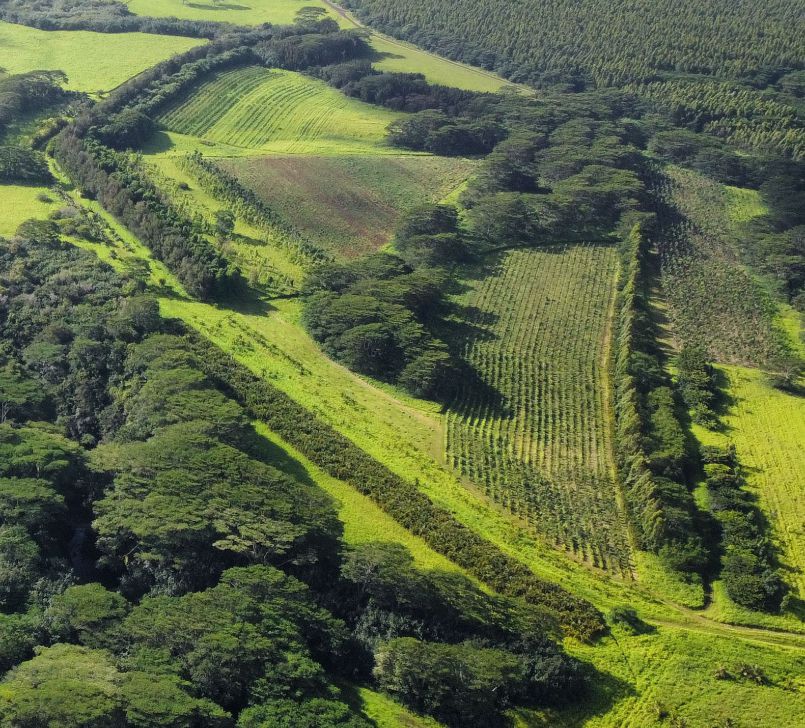 Not many visitors to Kauai's Hindu Monastery realize that a few dedicated monastics, along with a small hired crew have worked diligently over the past 20 years to plant and maintain a 100 acre forest of hardwood trees across the river, just a stones throw from the monastery. The trees now range from five foot saplings to fifteen year old trees up to 60 feet tall with plans to plant and/or replant a few more acres in the coming year.

Much of the land was originally covered with Koa and other native trees before it was cleared for sugar cane. Sugar cane became unprofitable and the land became available to the monastery in 2000. A small experimental planting took place following the 2002 celebration of Gurudeva's Mahasamadhi and in 2004 a long term lease was granted by the state of Hawaii and the large scale planting began.

Native Hawaiian Koa and large leafed mahogany are the two primary species grown with a few other varieties including teak and Narra planted here and there. Two aggressively invasive species of plant, guinea grass and albezia trees make maintenance of the trees mandatory and much more difficult that would otherwise be.

Eventually some of the trees will be judiciously harvested and either sold or used for monastery projects such as shrines and temples. Some of the most beautiful trees may be left for future generations and the harvested ones will be replanted with new trees.

Of special interest is an anticipated planting of especially tall, straight and mature teak trees which can be used for future kodimaram (traditional temple flagpole) installation and replacement for the monastery temple and other temples across the nation.

This entry was posted on Friday, October 8, 2021 at 11:01 am and is filed under Farming. You can follow any responses to this entry through the RSS 2.0 feed. You can leave a response, or trackback from your own site. 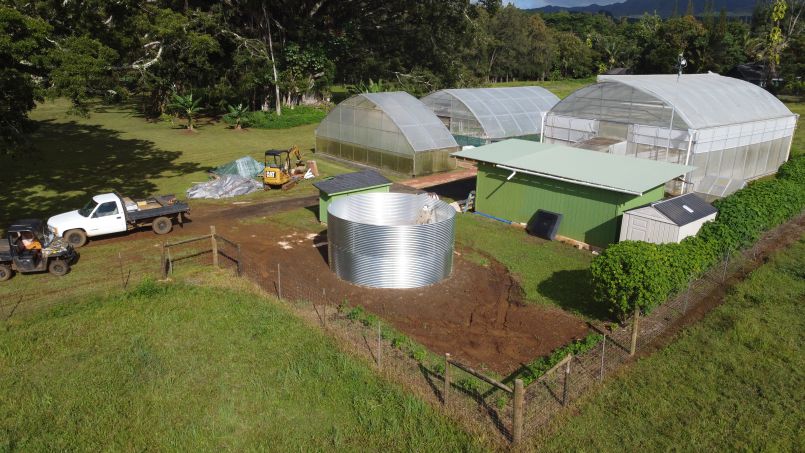 Recently we've completed the initial installation of a 10,000 gallon water tank next to our vegetable greenhouses. This tank will put us another step forward in our effort of self-sufficiency (and if we forgot to mention, the greenhouses already use solar power to operate). Currently the greenhouses rely heavily on county water to grow our vegetables. We have a localized, natural water source we can use as well, but it requires us to run UV and extra filtering. This new water tank will act as a reservoir for rainwater. As our prolific Kauaiian rains fall upon the greenhouse, the water will be channeled down to the tank. When the tank reaches a certain level, the greenhouse will automatically draw water from the tank rather than the county. If we get enough rain, we'll be able to grow our plants with significantly less reliance on country water, and as an added bonus, rainwater is a neutral pH and doesn't contain any additives or carbonates. This makes it very easy to mix the proper nutrient mixtures for our many growing plants!

This entry was posted on Saturday, October 2, 2021 at 5:29 pm and is filed under Farming. You can follow any responses to this entry through the RSS 2.0 feed. You can leave a response, or trackback from your own site. 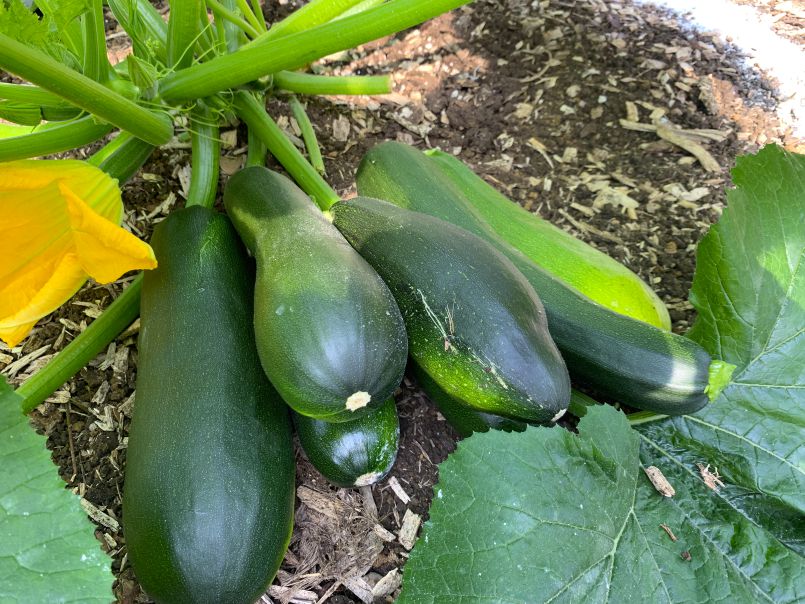 As you may know, we've recently started our first small crops growing in our new high-tunnel green houses. Without this protection, growing things like zucchini and cauliflower in Kauai can be quite a challenge. Although these plants are still small, we've just successfully harvested several batches of zucchini. This little squash is greatly enjoyed by Satguru and our monks. Our first harvest gave us 10lbs of picture-perfect zucchini which Chinnu later transformed into a delicious curry. Aum.

This entry was posted on Thursday, April 1, 2021 at 4:41 pm and is filed under Farming. You can follow any responses to this entry through the RSS 2.0 feed. You can leave a response, or trackback from your own site. 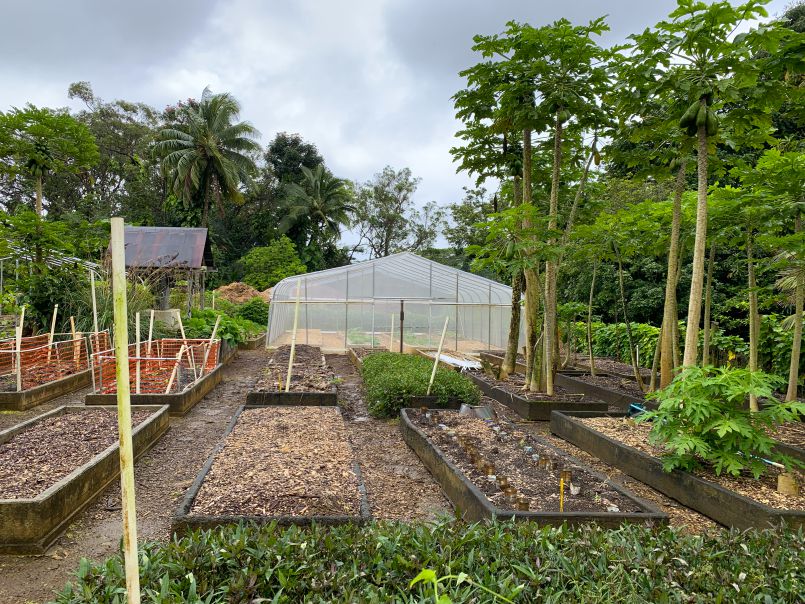 Today we bring you a garden update!

Our High Tunnels are progressing steadily and we now have plants growing in the first of them. Zucchini and Cauliflower are two notable veggies that we can't easily grow out in the open. Thankfully these two plants are starting to gain speed in their acquiring of new growth and we hope to eventually produce enough for our needs without having to purchase them elsewhere. In other departments we've started some new eggplants to replace our older bushes and off to the side of the garden you'll find a happy pumpkin patch. Aum.

This entry was posted on Tuesday, March 9, 2021 at 4:42 pm and is filed under Farming. You can follow any responses to this entry through the RSS 2.0 feed. You can leave a response, or trackback from your own site. 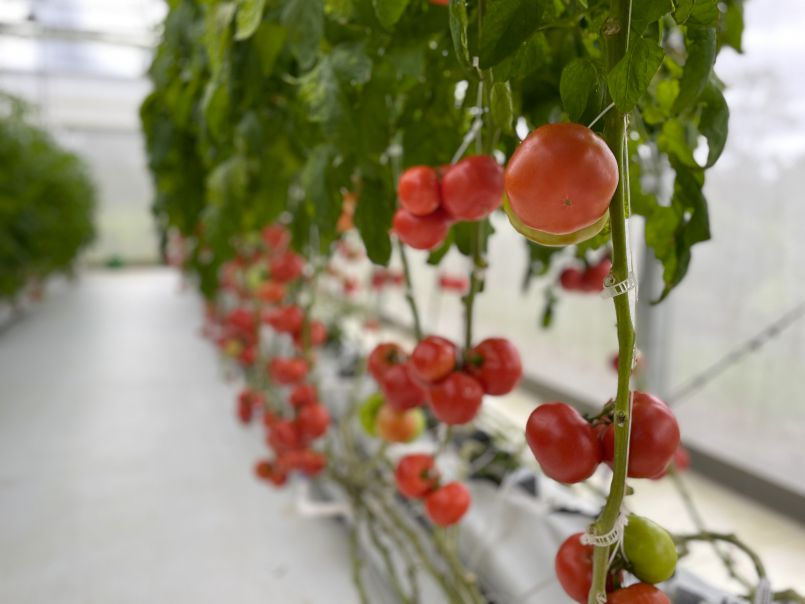 Today we visit our greenhouses for an update. The last time we brought you to our newest hydroponic tomato greenhouse, the plants weren't more that a few feet tall. Now we have four full rows of abundantly producing tomato varieties. With this crop in full production we have hundreds of pounds coming in every few weeks. We've been using them in a verity of ways. we of course use them in curries, soups and chutneys, but we have also been dehydrating them for sauces (including some homemade ketchup!). The system can seem immensely complicated, but once the basics are down our monks of the Siddhidatta kulam can work quite efficiently at keeping this operation going. We of course have our other greenhouse as well. It produces many other veggies and greens, including our constant supply of (the world's best) lettuce as well as our daily greens used for our lunches.

This entry was posted on Monday, January 25, 2021 at 5:22 pm and is filed under Farming. You can follow any responses to this entry through the RSS 2.0 feed. You can leave a response, or trackback from your own site. 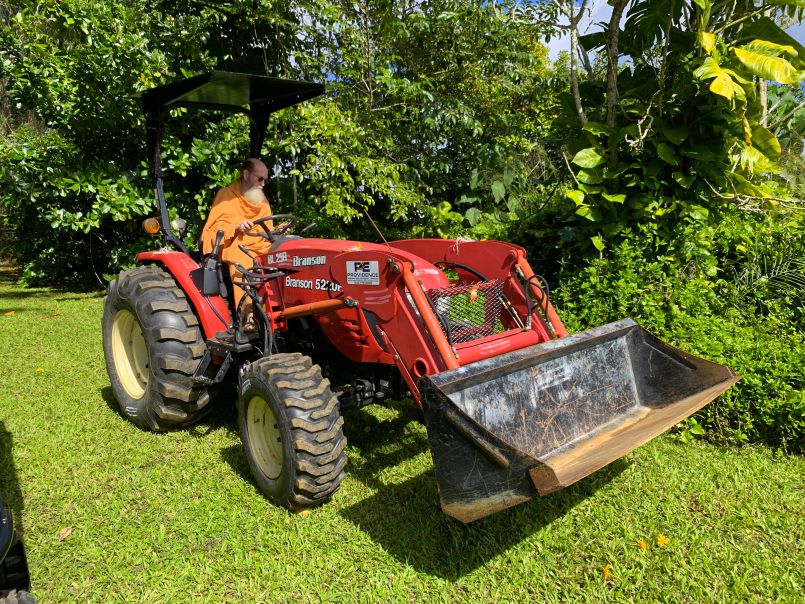 For some time now our monks have been looking for a good replacement for our primary tractor that we use on Himalayan Acres. With several hundred acres of land to care for—which included our mahogany forests and noni orchards—it's a big job to keep it all maintained. Several years ago we replaced our older Landini tractor with a newer John Deere model. Unfortunately, the new tractor utilized a fully computerized system that turned out to be easily broken and expensive to repair. Thankfully we were able to find this Branson tractor as a replacement. Though used, it's well-built, isn't computerized and should hold up very well in our challenging environmental conditions. A few days ago the monks held a blessing for the new machine. Aum.

This entry was posted on Saturday, January 9, 2021 at 4:58 pm and is filed under Farming. You can follow any responses to this entry through the RSS 2.0 feed. You can leave a response, or trackback from your own site.

Aum Sivaya. Here is our latest tomato variety to come online, ready for our monks to enjoy. These are Climstar Tomatoes. They grow in big clusters like this and, as you might expect, are super delicious. Jai to our veggie-growing monks! 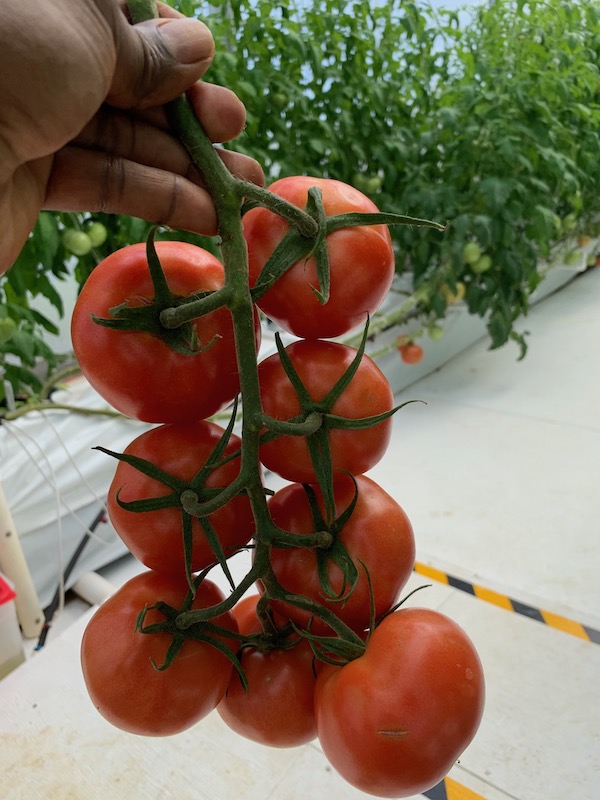 This entry was posted on Saturday, December 5, 2020 at 4:06 pm and is filed under Farming. You can follow any responses to this entry through the RSS 2.0 feed. You can leave a response, or trackback from your own site.